Recovering from our city break...

Our first night was less than peaceful than we had expected after 3 small boats arrived immediately behind us (see top photo) and partied well into the morning.  There was a huge anchorage – but some people only feel safe when they anchor next to someone else!

Our first walk took us 2.5 miles along the coastal path  to Cangas, passing an old harbour. 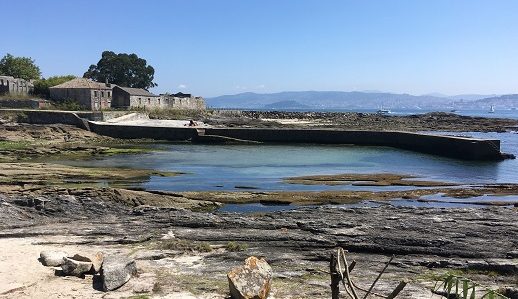 We returned to Limens over the top of the ridge separating the two bays. And after a hot walk with a few steep climbs we rewarded ourselves in the usual way. Why is Spanish beer so refreshing, why is one never enough, and why is it that Calypso never looks better than from behind another frothy one?! We did have the odd day where we never left the boat, reading books and doing the odd very minor chore – with nobody to knock on the door and catch you in a dressing gown!

We also walked West on the coastal path, and on a couple of days we even did the beach thing, and swam in the increasingly less cold water (Galicia doesn’t do warm water!) As the weather was settled we booked Friday night on Islas Cies. Sadly the National Park anchorage was fully booked on Saturday so we could only stay the one night. We have a permit that is issued without cost and anchoring is free, but numbers are restricted. The permit is available HERE. Get the permit before leaving the UK and then make a simple online booking with your permit codes.

We arrived after a 5 nm motor and stayed on board on a lovely evening – only to awake to thick fog!

We had intended to go for an early morning walk on the island before the tripper boats arrived but there was no point in the cold fog. 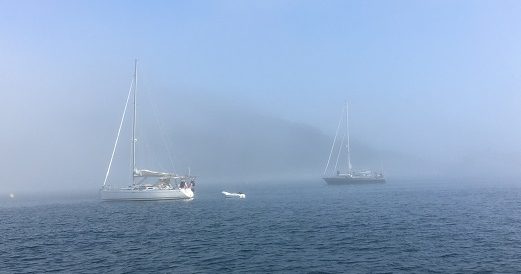 Once the fog started to lift (and before any park rangers caught us overstaying our welcome) we headed under motor for the nearest anchorage at 3.5 nm – Ensenada de Barra, the naturist beach also known as Bare Arse Bay.

And as we arrived, not only had the sun appeared but we were also greeted with a moon!!!

We had been here before, but never during the summer holidays (we arrived 14 August) and were surprised at how busy the beach was.

We might have liked to have had a beach afternoon here, but after witnessing a new behaviour from the naturists decided against it.

Shortly after we arrived we heard loud cheering, clapping and whistling on the beach. We then saw three young men walking along the shoreline wearing shorts. Clearly that is not allowed on a beach where almost all people wore their birth day suits.

The cheering progressed down the beach following the young men, like a Mexican wave. And then, under the pressure, one of them broke – and when he waved his shorts over his head the crowd erupted.

It turned out that this was not an isolated occurrence – every time someone walked down the beach with clothing they got the same treatment.

This also seemed quite rude and aggressive to us. And at one point the aggression boiled over – a fight on the shoreline and the police were called. It turned out to be between two middle aged naturists – clearly the “willy waving” testosterone filled atmosphere got the better of them.

As Brit prudes we chose not to join in, but we were certainly not going to run the gauntlet. And so when we went ashore before the crowds arrived early on day 2 we parked the dinghy at the western end of the beach and quickly made our way onto the headland and across to the much quieter beach that we had seen on our way back from Cies. Having enjoyed a simple seafood lunch at the lone beach bar we headed out to the lighthouses on the rocky shoreline that overlooks the national park islands, Islas Cies.

Between them we found a memorial to Pepe Ruiz – answers on a postcard please, but we suspect he was some sort of hero. 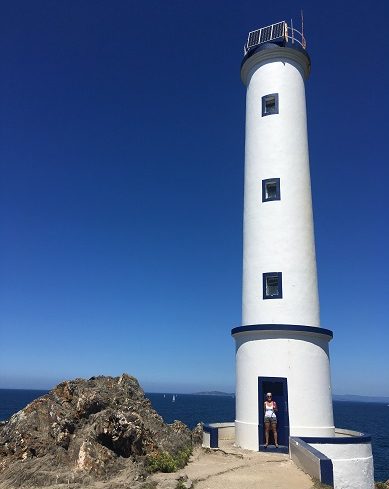 Barra is a very well sheltered and popular anchorage. The north-western corner provides excellent shelter from any Atlantic swell, but the restaurants are at the very far end of the beach around a mile away – half of which would see you running the gauntlet of the Bare Ass brigade! Having said that, we have enjoyed being here out of peak holiday season without witnessing this behaviour.

There were some characterful boats choosing to anchor here. We have seen the middle aged fellow a few times on the small junk rigged boat behind us, but we hadn’t seen the old ketch with crows’ nest before.

And the ongoing theme of 2021 continues – an almost complete absence of British yachts. Presumably most opted to stay at home as the Covid pandemic rumbles on.

At this point we had intended to stay out on Calypso for another couple of weeks – allowing son Jos to get some sailing in before the new 90 day Schengen allowance cuts short our usual 5 month season.

However the not-fit-for-purpose British press were all hysterically predicting that Spain would be placed on UK’s red Covid travel list within 2 weeks. We did not follow their logic, but were not prepared to risk a £4,000 quarantine hotel stay for the sake of an extra few days at sea.

And so we made a decision – and contacted Xufre to arrange a lift out in a few days time. After just two days at Barra we would lift the anchor tomorrow and head North (although the aggressive willy-wavers would have made us move on anyway! Our advice – Barra is a lovely place but avoid peak holiday season).