A few days after we arrived back in Xufre our son Jos joined us for a week.  Our not-fit-for-purpose British press had just one week ago told us that Spain would go onto the Covid travel red list; but then suddenly changed their minds and advised, based on exactly the same statistics, that Spain would be OK for now.

Jos was disappointed not to get any sailing, it being 2 years since he last visited Calypso, but all the same enjoyed life in the boatyard, which was something new for him.

The first thing we did was to take advantage of the vouchers that the nice people at Vinoteca Tucho (in Riveira) had given us and we thoroughly enjoyed the visit – including tasting the white wine voted as Galicia’s best that year. We wouldn’t disagree!

The vineyards were beautiful and we loved seeing inside the old house – still occasionally lived in but full of history. All in all we wouldn’t have been unhappy had we paid for the visit. Back in the boat yard it was even more exciting than usual, which was good news for Jos.

Firstly – after hearing a bit of screeching on the roundabout in the night we awoke to find that a car had gone into the water and under one of the new mussell boat pontoons. Apparently the occupants escaped and their excuse when they returned later in the morning was that it was foggy and that confused the driver. Quite why he/she was screeching around the roundabout more than 100m from where he/she entered the water we didn’t hear…..maybe we confused two separate incidents?

And there was a young couple we were chatting to who invited us aboard their yacht for an interesting evening, and younger company for Jos.

Riley and Viola, a Canadian/German couple had taken a sabatical from their work in Amsterdam and were in the yard as a result of hitting a “floating rock” nearby, around the back of Illa Arousa. The navigator, who shall not be named, had made an error when she was zoomed too far out on the chart plotter to see the rocks. The rocks stopped the yacht pretty quickly, so not only were repairs required to the keel but the water tank had shifted and ruptured and required attention, along with a few other challenges. They were good fun, and one day Viola might actually create another instalment of their blog, after the promising start on YouTube HERE 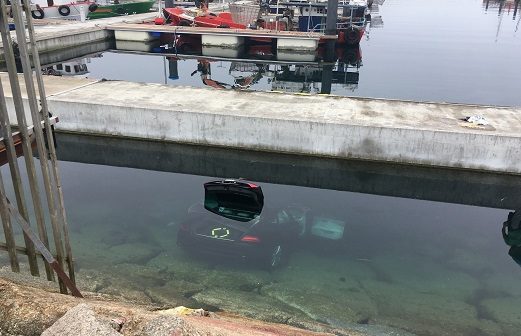 Not able to sail we still wanted to explore. So we unwrapped the Berlingo micro-camper from its untouched protective cover and set off. Jos would sleep in the drive-away awning and we had bought a new inflatable airbed for that purpose.

Our first stop was the Canon do Sil campsite in Galicia’s Ribeira Sacra wine producing region. Just 100 metres from the top of the site was a stunning viewing point high above Canon do Sil.

The following two photographs show the nature of the vineyards here, steeply sloping and terraced, dating back to Roman times. At one time all grapes were carried out of the vineyard by hand – the trip from the bottom to the top taking up to 45 minutes for each basket.

Now there are metal rails installed and boxes of grapes are pulled up the rails using steel wire and winches. 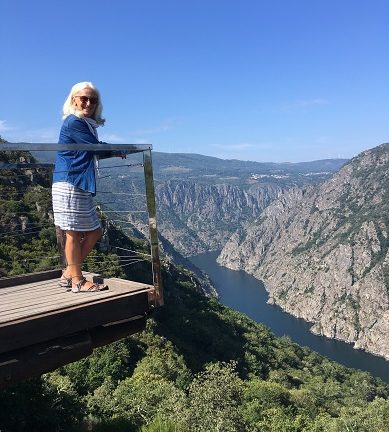 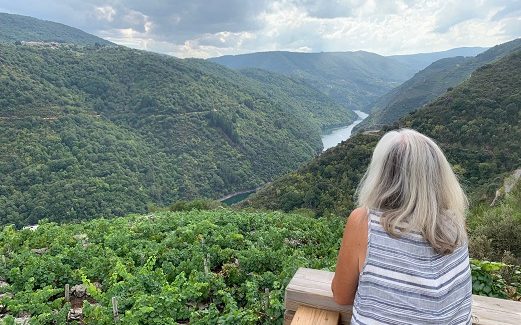 We visited Bodegas Algueira and Petron. Both have good reputations and we bought wine blind (without tasting) at Alguiera, although at Petron we had an exceptional lunch accompanied by their top wine, voted Galicia’s best red this year. At only 16 euro in their shop (20 in the restaurant) which was amazing value a good few had to make their way into our now (post Brexit) much reduced allowance at only 24 bottles each.

After two nights in Canon do Sil we drove a few hours to Penafiel, an important centre of the Ribera Del Duero wine production area.

Jos had not enjoyed the best nights in the awning so we found an AirBnB for two nights of respite. It had an excellent view of the spectacular castle from the balcony (featured photo above).

We paid a small sum to visit the well preserved castle housing a visitor centre with an interesting wine museum.

Naturally we visited a few bodegas. Stand outs were Pesquera, where we bought more wine than we expected (they are a favourite bodega and very unusually had good discounts; maybe a hangover from reduced sales due to Covid?) along with Pago de Carraovejas. Here we bought not a single bottle – because they had sold out! The host of our AirBnB told us that Carraovejas is one of the most sought after wines in Spain. Fortunately we found the last bottle at a very good wine merchant that we visited last time we were here. The Penafiel castle can be seen in the Pago de Carraovejas photograph. 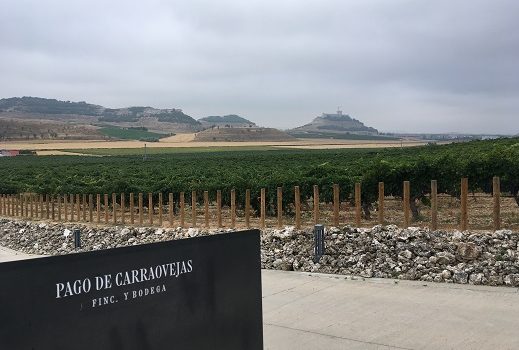 Sadly we had to leave after a couple of days when we drove another few hours to Salamanca. We stopped off at renowned Rueda producer Jose Pariente. Tasting what turned out to be great value nectar saw us once again blow the 48 bottle target. At this rate we are going to have a good cellar left on the boat!

We selected a campsite that had a bus stop to access the city centre without having to drive. It also had a large outdoor swimming pool which we enjoyed during our stay here.

Jos put up with the awning for a couple of nights, but the reward of the excellent pool and what turned out to be a stunning city was worth the discomfort! The old city centre of Salamanca is a UNESCO world heritage site, and boy does it deserve it. This is indeed one of the most stunning cities we have visited. Google will give you the history of the place, but here are photographs of our visits to the city on 2 days. The main square was particularly impressive, but every corner revealed a new surprise. 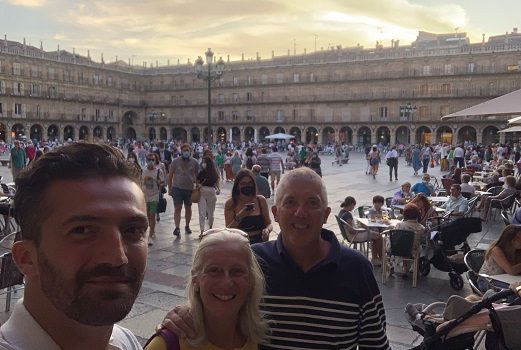 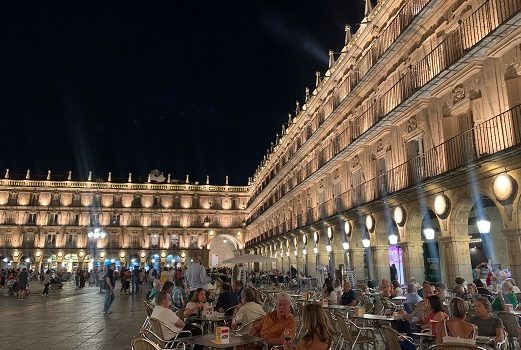 The cathedral was not as large as some we have seen on our travels in Northern Spain, but it was impressive all the same.

The stone carving, roof structure and furnishings were all amazing………… 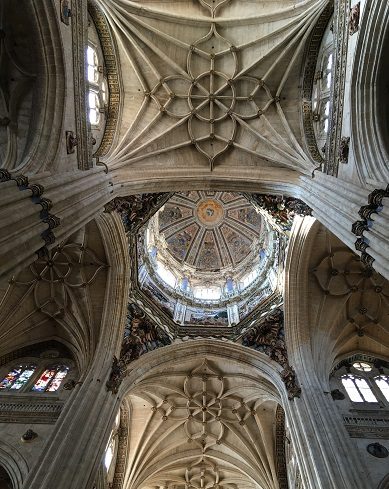 ………and in a corner, tucked away, we found the inspiration out of which was borne the Calendar Girls!

On the way home we stopped of for lunch in a random village and found another gem of Northern Spain in the hilltop fortress town of Puebla de Sanabria.

Jos spent a few days in the boatyard before flying home. We put the boat to bed and set off to Santander, where we booked into a hotel to visit the city as we had wanted to do for the past few years.

We did enjoy the place, but it wasn’t quite the impressive port city that we thought it might have been.

Nonetheless it was a good end to our excellent but shortened (by Schengen 90 day allowance and the tabloid Covid scare) year. On our way home we called in to see Adam and Lynne, now back in Weymouth where we first met them in 2017. We had missed their company this year and spent a couple of days catching up.

We thought they had invited us for the pleasure of our company – but quickly learned that they needed a mug to enter the murky waters of Weymouth marina to hopefully sort an electronics issue  – a faulty echo-sounder – with a blue scrubbing brush!

Well that aside we think they enjoyed our company as much as we enjoyed theirs, and it was a good way to end another great year. 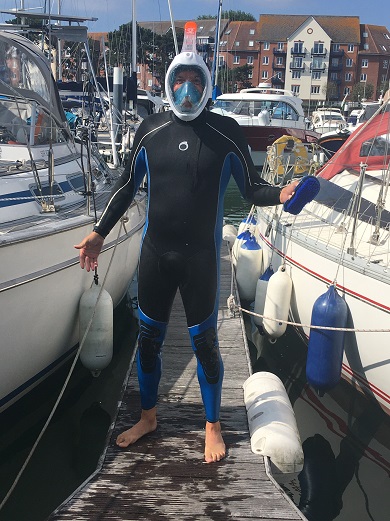 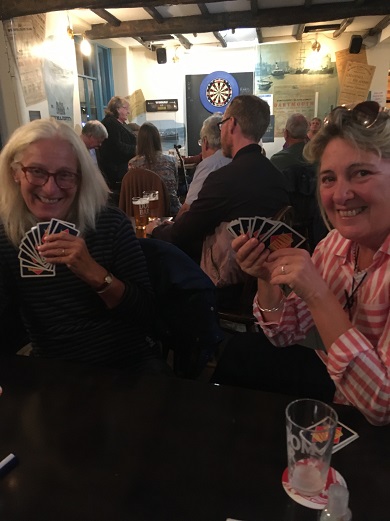