….although there was a gentle atlantic swell: 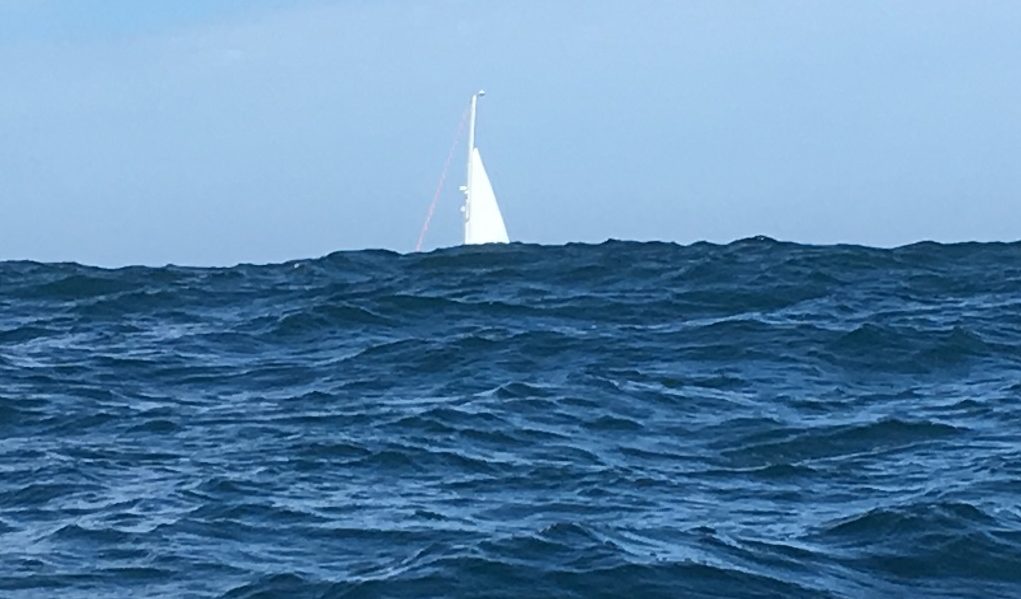 There are a lot of lighthouses on this coast, this being the St Mathieu lighthouse with a derelict monastery adjoining:

We had visited Camaret Sur Mer previously, by land, and remembered it as an interesting place, with the harbour surrounded by shops and restaurants, with a sandy beach on the other side of the harbour wall. This photo shows the inner Port Nautic – with fairly shallow draft and not suitable for us. We were in the outer Port Vaubin, on the far side of the tower in the distance, and which is mostly used by visitors. We couldn’t find the VHF channel to call up when we arrived so we just went in and took up a space.

The tower and nearby ancient church have been restored since we were last here. I had read that the visitors’ facilities were in the tower – in fact they seemed to be in an old dungeon next door: The facilities were just about ok but not great! The cost of our one night stay was 31+ euros – a bit pricey for this time of year in Brittany, but perhaps reflecting that the port is used by most boats heading through the Chenal Du Four and Raz De Seine, sitting as it does neatly between the two.

We had sailed here in company with our friends the Bisphams and had a beer with them after looking around the abandoned old trawlers that sit on the beach inside the harbour – something of a tourist attraction. The Bisphams are much more experienced than we are and their anchor is put to full use – rather than ours which functions more as a piece of sculpture at the bow. We are going to have to use it more – and enjoy secluded bays in glorious sunsets like this one enjoyed by Adam and Lynne that evening: The weather was set to remain settled the following day, with the swell diminishing further, and so we took the opportunity to round the raz De Seine into Southern Brittany in calm conditions. The Raz has a fearsome reputation.

As we left Camaret the rock formations were impressive. We passed these and then took a course between other smaller, but no less dangerous rocks. The channel was well buoyed and we are getting used to the fact that channels which look very narrow on a chart are mostly quite spacious – however not places we would want to be with a chartplotter malfunction!

Again the Bisphams tagged along for the 31 nm trip – can’t get rid of them (thankfully, they’re great, great company really). Here they are passing some more rocks with yet another lighthouse (Tevennec) in the Raz De Seine passage:

And here is the La Plate cardinal marker and La Vieille lighthouse off the Pointe De Raz (why they need both here I don’t understand, but no doubt someone will educate me soon!) 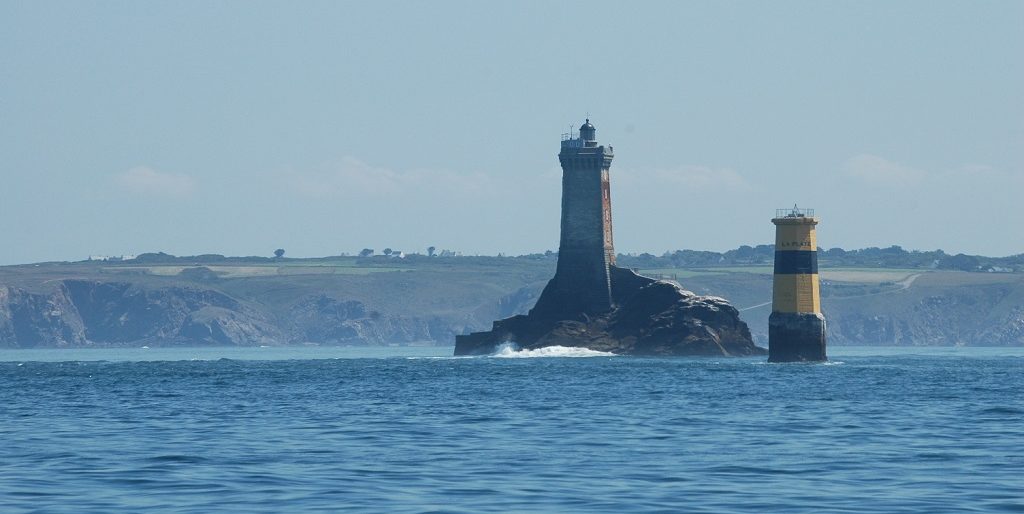 Our destination today was to be Audierne, up a short stretch of tidal river. We first had to pick up a buoy in the St Evette anchorage to wait a couple of hours for the tide to rise sufficiently to allow us in over the sand bar at the entrance and up the shallow river to a marina.

As we entered the river 3 1/2 hours before high water (3 hours before is reccommended, but Adam is a clever dick and insisted we should go earlier. By his own admission he did plough the sea bed at one point). There is obviously a problem with silting here, as evidenced by the large dredger at the entrance, deepening the channel through the bar. Once we got past the dredger the depth improved significantly, but it is still necessary to follow leading lines and read the pilot book carefully (Adam!) We did see one boat going the wrong side of the channel markers when in the harbourmaster’s office – and witnessed the harbourmaster barking at them down the radio, followed by a rapid crash turn! As we rounded the corner into Southern Brittany the weather changed, and we were in for a spell of hot and settled conditions. We celebrated our successful passages through two tidal gates of renown – in the time honoured fashion: We liked Audierne – more than we expected (this could become a theme on this trip!) The town was small but pretty. There was a superb market on Saturday. There is a small Casino convenience store next to the port, and a reasonable walk to the edge of town (about a mile and a bit uphill) led us to Lidl and (our favourite) L’Eclerc supermarkets.

The marina had excellent, clean facilities and was a very reasonable 24 euros a night.

We took a bus to Dournenez – fairly infrequent, but the buses are very comfortable coaches and everywhere is 2euro – whether the journey is 3 minutes or half an hour. We have since learned that a bundle (carnet?) of 10 tickets can be bought for 15 euro (possibly at tourist information). We liked Dournenez and had intended to visit by boat, but had to take the opportunity around the Raz when presented – and time is marching on – and we can’t visit everywhere! The book says that the visitor pontoon at Douarnenez is exposed to the North – and it certainly appeared that way.

Below is a view of “Port de Plaisance de Audierne” taken from above – Calypso can be seen stuck out slightly, rafted onto Charysma. And so the liver punishment continued – with the Bisphams introducing us to the card game of Wizard. By the end of the evening the cards were stained with red wine – along with seat cushions, cockpit floor, and us. It was a night to remember – if only we could! 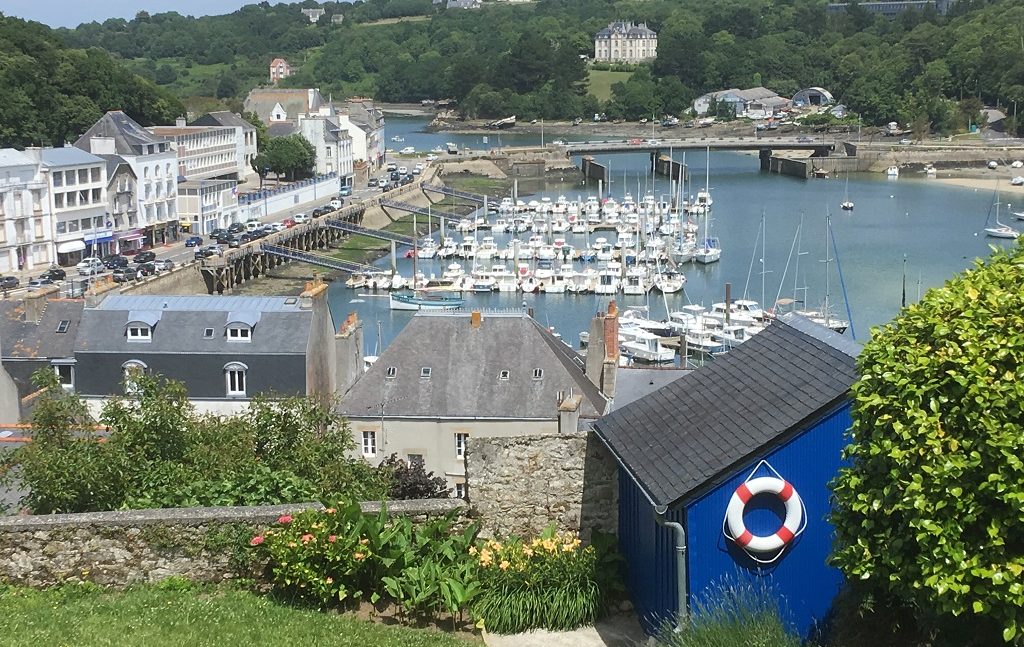 Lynne forgave us the very next morning – all was forgotten. And so we decided to sail on together in company for a little longer – next stop Le Guilvinec, where 17% of France’s fish is landed.