We had visited Portonovo and adjoining Sanxenxo in the Berlingo before launching Calypso and weren’t expecting too much, but had been at anchor for several days and needed to top up the water tanks and fill the cupboards! Paul called the marina to reserve two berths as it can apparently be difficult to get a berth in late July in the Rias Baixas marinas. So far we hadn’t had any difficulty but the marinas were saying that it had been a quiet season so far. We left Aldan on a grey day with gentle South-Westerly winds enabling us to actually sail for once!

We had set off before Shiraz and once out of Aldan we changed our heading, going directly downwind so that we had to goose-wing. Shiraz don’t do quite as well under these conditions as we do and so motor sailed to eventually catch us up.

After around 8 nm we arrived at the marina and having radioed ahead were met on the pontoon by a friendly marinero (we have yet to meet an unfriendly one!)

We signed in and were told that we wouldn’t need a card for the pontoon gate as the marineros were on duty 24 hours a day and the gate is never locked.

We handed over 20 euro as deposit for the access card the the more than adequate showers. Staying here for up to 12m boats is not overly expensive for high season in this area. We carry a few discount cards and the one for this marina gave us a 15% doscount for the first two nights. With that we paid 101.30 euro for a 4 night stay.

We liked the fact that the marina sits within a working fishing port and we could watch the comings and goings of the fleet from our berth.

We expected the marina to be reasonably well sheltered, but after a couple of days of wind from the South West there was quite a surge in there for the first two days.

Having driven through here in the Berlingo from Xufre (before launching Calypso) we didn’t think too much of the place, and indeed from the marina the town doesn’t look much.

However at the side of the marina is a large beach (photo below) and through the town is another beach, and there are numerous bars and restaurants which are busy with a good holiday atmosphere at night. Add in a market that rivalled some of the amazing produce markets we found in France, a few good shops where we bought bits and pieces we had been looking for, and the town was much better than we expected.

We had mixed weather whilst here. It was a shame it rained on Saturday as there was a big handball tournament on the beach – 3 pitches in action at all times, teams of both sexes and all ages were playing what is clearly a popular sport in these parts (it has been shown in bars whilst we have been here).

We watched for a short time but in more clement weather could have enjoyed watching a full match or two. We walked from the marina around the rear of the Portonovo beach on a boardwalk, then over the bluff/headland that separates it from Sanxenxo bay, with Val here looking across the Sanxenxo beach (Praia Silgar) which is also a popular anchorage over sand and well protected from prevailing North winds.

At the far end of the beach is Sanxenxo marina and its posh yacht club. We didn’t go into Sanxenxo marina as firstly it is over 40 euro a night for us and secondly the is a night club in the marina complex which apparently prevents much in the way of sleeping there! Certainly we had no trouble sleeping at Portonovo.

However we did like Sanxenxo. The beach was far too busy (a couple of hours after this photograph was taken the sun was out and there was room only for small towels!) There was, however, a good range of shops on the seafront and in the marina were 2 good chandleries where we bought a new mooring spring, some very good quality melamine plates and dishes at a sale price (we have been looking for this for a while) and some flat hose to cut into lengths to replace the old hose we use for chafe guards (for mooring lines) that had gone horribly sticky in the sun.

We were tempted to get dressed up and go for dinner in one of the posh restaurants at the western end of Praia Silgar, but never quite drummed up enough enthusiasm! We had a good night out with the Shiraz crew; first dining at the restaurant recommended by the (friendly) marinero and then visiting the swish bar in the yacht club building.

There is what appears to be a nice restaurant on the first floor of the building which we never tried, but the bar and terrace hanging over the sea was a good place to finish off the night.

As we left Portonovo we reflected on how different we had found our visit from our expectations after the “drive-by” in the Berlingo at the start of the season.

We had spent 4 days here and would not have complained should poor weather have kept us in port. However it was time to go as the much anticipated tourist honeypot of Combarro beckoned.

This last photograph is of Sanxenxo as we headed East out of Portonovo. 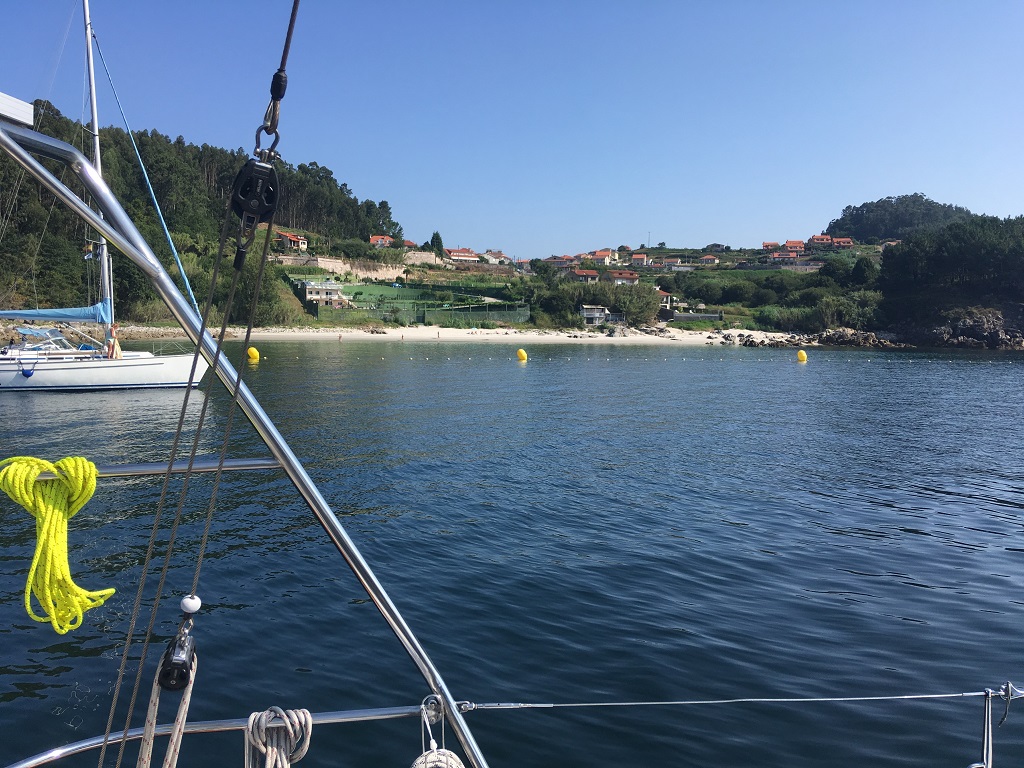