How To Retrieve A Reefing Line

Val looks very happy as she shows off the boom above her head containing an errant reefing line that Paul very stupidly pulled into the boom when preparing to bend on the mainsail.

This post is, indeed, very tedious. It will not be interesting to most of the sailors among you and certainly not to family and friends. It is only of interest to someone in the same predicament who is looking for an answer without having to part with cash. This is a “how to” guide.

The first advice is to learn some new swear words, you may need them!

We have labelled a diagram of the system which shows the following:

A – The line that pulls down the leech (rear) of the sail. This is a continuous line that runs to the cockpit through points B to E (but not in that order!);

B – This is a turning block attached to the aft end of the boom end fitting; E – the leech (aft) reefing line enters/exits the forward end of the boom via the turning block shown and from there back to the cockpit;

F – the luff (forward) reefing line runs from the car and through this block at the forward end of the boom…;

G – and finally the luff reefing line attaches to a reefing cringle at the luff (forward end) of the sail.

To put a reef in the sail we pull in the reefing line at the cockpit. This pulls down the leech (aft) end of the sail towards the boom. It also pulls forward the boom car which in turn pulls the luff (forward) reefing line to the boom. When winched in both luff and leech reefing points are pinned in tight to the boom and sail area is reduced.

It should be noted that there are other reefs and a line to tension the foot of the sail which also run inside the boom, making things a little tight in there.

When we were about to bend the main sail on in the Pobra anchorage Paul pulled through the reef line from the cockpit towards the mast so that the lines could be affixed to the sail as it was hoisted up the mast. He pulled up the luff (forward) reefing line through block F, as he always has done – but he then did what he had not done in previous years, which was to absent mindedly and very stupidly undo the stop knot in the reefing line at block B before he was ready to attach it to the sail.

And so, as the boom car (D) was being pulled forward on its wheels by Paul pulling out the luff reefing line, the leech reefing line without its stop knot) was drawn into the car, falling off the block on the car and sitting somewhere in the middle of the boom, which is around 5m long, and so was completely inaccessible. Even with a very powerful torch and binoculars we couldn’t see it, and so going fishing for it with a hook was out of the question – there are too many other lines running through the boom that could be snagged.

So what did we do when Paul had finished swearing at himself and calmed down? We consulted Google. Several sailing forums apparently have threads on this subject – Paul was please to find that he is not the only …… idiot out there! However, advice rendered did not yield the answer – the main thrust seemed to be that if you can’t reach it you have to drill out the very sturdy rivets and remove the boom car – but be careful, when you draw the boom car (D) out it has small wheels which have a habit of pinging off and going overboard. And you will need a pro sized rivet gun to replace the end fitting – in fact don’t bother, just call in the professionals!

Next step was finding and downloading the diagram of the system shown above, after which it all made sense. Paul developed his plan and put it into action as follows:

4. The mousing line was tied around the forward reefing line, therefore enabling us to pull the reefing car to the aft end of the boom. The first attempt failed as the mousing line had gone around another line within the boom, so the whole baton was withdrawn and re-inserted, second time successfully allowing us to pull the car almost to the end – stopping just short of block C. In order to create more space in the boom end we removed block C, which was left dangling below the boom end with the reefing line still running through it.

5. The end of the reefing line now had to be put back into the boom and upwards through the block in the car. This was achieved using a wire coat hanger! The end few inches was bent at 90 degrees and the reefing line loosely attached to it, using the plastic-coated wire tie wraps from bread bags or similar (we do keep a stock on board – sad huh?) After a few attempts and more swearing the reefing line appeared above the block. Next came the careful use of a 3-pronged fishing hook, tied on strong line and taped to a thin bamboo. Being ever so careful not to slip and catch another line in the boom Paul caught the errant reefing line – along with another line! Not too much swearing later the hook was removed and the errant line retrieved!

6. All that remained was to thread the reefing line up through block B, TIE A STOP KNOT, push the car slightly forward and reattach block C (using a thread locker, we don’t want to see that sucker pulled into the boom!) and…….;

7. Pat oneself on the back for being so clever and persevering in the face of the doom found on the forums (whilst trying to forget just how stupid one was just a few days before!) 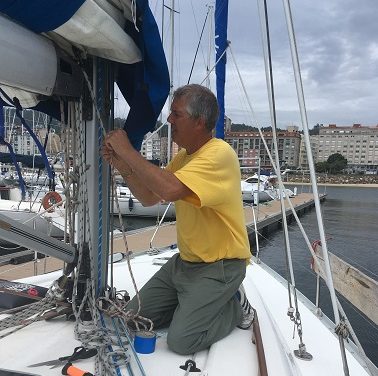 This photo shows the slot (black hole on the side of the grey forward boom fitting) through which neither Paul nor Val could get to the reef car, although through which we could see it and through which we secured the mousing line when pushed forward with the batten.

This all took maybe 3 hours, allowing for time spent venting frustration by walking away rather than doing damage! Training as a gynaecologist may assist, but Paul and Val have both used bailer twine to deliver calves, and maybe that was our advantage over the doom mongers!

We told you it was tedious….