This one may be of more interest to novice sailors following behind us, but stay with it family and friends – there is something for everyone here!

We had crossed the English Channel by sail once before – from Southampton to Alderney, then back again, at the end of October, overnight, through the shipping lanes and in a gale. We thoroughly enjoyed that experience with BOSS (British Offshore Sailing School) with a pro skipper on board, but wanted something a little less taxing for our first venture on our own, with Calypso.

We learned with BOSS that the Channel passage should be planned with a constant course to steer to take account of the tidal flows for the entire journey. The tide in the Channel will flow East to West and West to East, but rather than changing course every time the tide changes (and in reality it changes constantly in terms of its strength) – it is best to add up the distance that every hour of tide takes you West and then subtract the distance for every hour that the tide takes you East – and calculate the net tidal drift and a course to steer to compensate for the net drift.

For us the tide was going to set us 3nm to the West of our destination if we steered in a straight line to our target. So you would think that we should set a course to steer to the point 3 miles East of our target? WRONG! In addition we need to allow for the fact that error is involved, and to think which way the tide will be running when we arrive – and then aim to arrive slightly “up tide”, as it is easier to adjust with the tide than against it. For us, passage planning at 5kts (should be more, but we expected to be motoring through the night and remember the prop problem – we only motor at 5kts) we expected that the tide would be running West to East when we arrive. So – if we plan to aim for 3 miles East and arrive 3 miles East due to error, we would be motoring West against a nearly 2 knot tide to get to our target when we get there (keep up at the back!)

So – we calculated a course to steer which pretty much aimed straight at the entrance to L’Aber Wrac’h, and intended to look carefully at our position alongside the tidal stream charts as we arrived (for the non-sailors – the tidal stream atlas for the Channel shows the direction and speed of the tide for the 12 hours of tide related to high water Dover, which we know from the almanac that we carry – WAKE UP FFS THIS IS INTERESTING as watching paint dry – ok you were warned!) In the end we did adjust earlier to account for inability to steer our desired course when sailing, but you get the general idea – don’t you?

Remember the CAMRA pub we visited in Falmouth before having dinner with Paul and Dick? Well in there we sat next to a salty young sailor with dreadlocks who lived on a boat and who had sailed all of his life. Well he said “L’Aber Wrac’H? Oh shit dude, there’s lots of rocks, be really careful. Do you really need to go there?”

Well, that was totally encouraging; “dude”! So that’s why we planned to get there (at our 5 kts) a bit early; and if need be stand off (slow down) and wait until we were in the last hour and a half of the flood to enter this devil’s cauldron of a nightmare of a dangerous entrance passage (oh shit, do we really have to do this??)

Well, we should have taken more notice of the dreadlocks that this hippy dude was sporting! The whirpools, serpents and shipwrecks were perhaps borne out of a whacky baccy haze rather than existing in reality. Yes we ended up standing off and slowing down for an odd couple of hours – waiting not only for the whirlpools and serpents to calm down – but also for the ominous looking fog bank to burn off – but when we entered the “Grand Chenal” it was much wider (“Grand” – that’s a clue) and calmer that we expected, and as someone we met last year in Falmouth (then about to do the same crossing) mentioned – “it is very well buoyed”.

Certainly we wouldn’t want to be here in nasty conditions, but when we entered the monster that we had constructed in our minds turned out to be a pussycat. Ok, a Siamese with a few quirky habits here and there, but a pussycat all the same.

So – back to the story of our crossing. We aimed to set off around 11.00 to 11.30. We had a weather forecast that would see us sailing (without engine) in a fairly flat sea until late in the evening and then motorsail through the night. We would steer a course aimed one mile east of the Libenter cardinal buoy that marks the entrance to the Grand Chenal, and we would take 20 hours to make the 98nm passage (plus one hour for safety, and probably more given that we would make up time on our 5 kts as we sailed). 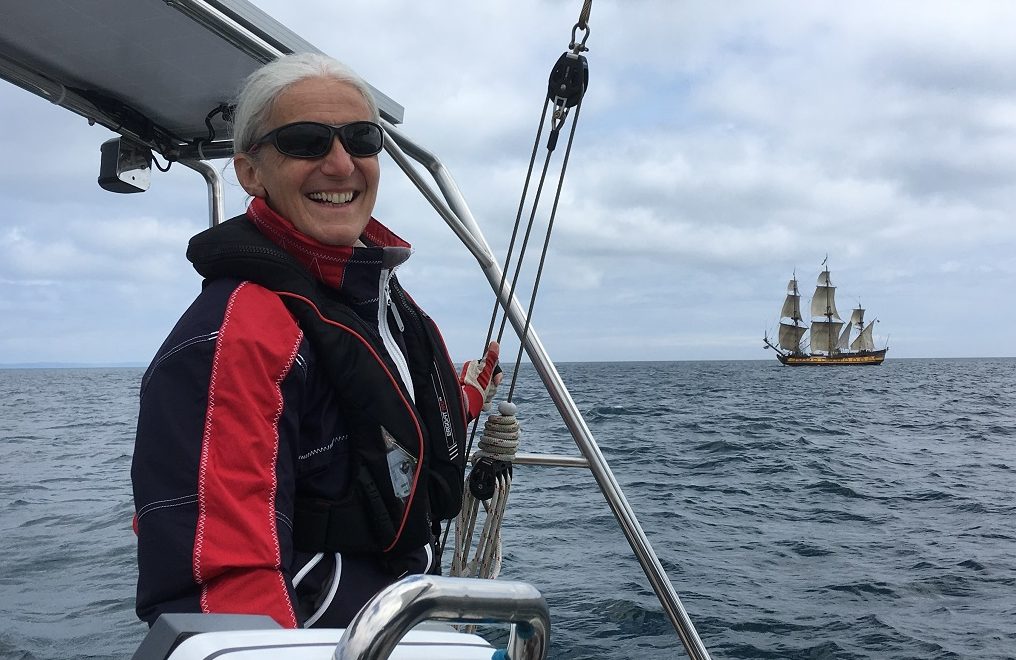 We passed anchored ships several miles South of Falmouth, and unlike last year in the Bristol Channel – we knew very early on that they were anchored because we had AIS! We sailed from 11.50 until 20.00, gaining on our 5kts predicted passage. After darkness fell we started crossing the unofficial shipping lanes (ie not a Traffic Separation Zone). Paul was on watch for the first period and watched traffic carefully on the AIS. At one point we were on collision course with a large tanker. The tanker had right of way as we were motoring and not sailing, and they were off our starboard bow (you falling asleep again??) As Paul slowed down and then speeded up to watch the CPA (Closest Point of Approach) change and determine whether to slow down or speed up to avoid the still distant tanker, he noticed that the heading of the tanker changed from 68 degrees to 65 degrees (and the CPA increased). The tanker will have seen from our AIS profile that we are a sailing vessel and assumed we were the “stand on vessel”. Oh well, we’ll accept that, but otherwise our course took us nicely through the traffic.

Here is a shot of what we see on the chartplotter when the AIS data is overlayed. Note that our actual position is at the front of the black windscreen of the huge motorboat which represents us.  You can see that the Baltic Perch is traveling at 19.2 kts on a heading of 65 degrees, and that its CPA is now 0.721nm, which will occur in 3minutes 2 seconds (it was originally coming within a few hundred yards of us and set off the CPS alarm which we had set at 0.5nm with 15 minutes notice). [EDIT – on a subsequent radar course we have been advised to set the alarm at 1nm]

The other ships that Paul had highlighted as of interest are passing well away from us. We can also obtain further information which will tell where they are coming from, where they are going to and what type of vessel they are. Isn’t technology amazing (unless you are in your twenties, dude!) Shortly after this picture was taken the watch changed – Val took over and Paul went below for a couple of hours’ sleep. When he emerged and asked Val (who was busy interrogating the AIS) how she was doing, the answer was “it’s like Picadilly bloody circus out here”. And she was right. Lot’s of plastic being delivered from China to Poundshopstretcherwilkoland that night.

As dawn dawned, grey but with a glimpse of a hazy sun here and there, we slowed down as we were 2 hours ahead of schedule, thanks to the good sailing conditions earlier and our planned spare hour. The sea state was very calm as, somewhat belatedly, we hoisted the French and Breton courtesy flags (see top photo).

We checked our heading with the tidal stream atlas and adjusted as necessary to ensure that we didn’t arrive down tide. A fog appeared on the coast, which we hoped would burn off, but the sun was mostly behind clouds so we feared the worst – serpents, whirlpools and rocks appearing out of a pea-souper!

As it turned out the tide was gentle as we entered, the Grand Chenal was grander (wider) than it looked on the charts to our inexperienced eyes, and the mist had disappeared. We could have come in a couple of hours earlier, but better safe than sunk. That said – there really are a lot of rocks!

There are day marks on the land providing leading lines to follow in: first heading 100 degrees on a couple of spires and then turning after the Petit Pot de Beurre onto 128 degrees to follow another leading line marked by orange topped day marks. Frankly the daymarks would be impossible to pick up without binoculars, and we could have managed with the buoyage alone. Here is a warts and all extract from our passage plan showing waypoints (no 5 not used as fog lifted) and the simple summary of buoyage that we keep in the cockpit to refer to when entering and counting down the buoys. It is not perfect and not quite as neat as it might be, but navigator Paul understood it. And we didn’t hit a rock! We arrived at L’Aber Wrac’h marina and called them up on channel 9 seeking a berth. Within a few minutes a nice lady in a dinghy arrived at the entrance to show us to our berth – alongside on the inner side of the northern breakwater. She jumped off the dinghy and took our lines on the pontoon – what a great welcome. We turned off the engine at 08.30, tidied the lines and fenders, and went below to crash, reflecting on a nearly perfect passage – a little more sailing and less motoring would have been good, but we’ll swap a wind dying below the forecast rather than building, any day!