We had long anticipated our visit to what is supposed to be one of the jewels of the Rias Baixas. We found the peninsula housing the castle, Parador and Monterreal Yacht Club to be amazing – but sadly the town did not live up to our high expectations…………… 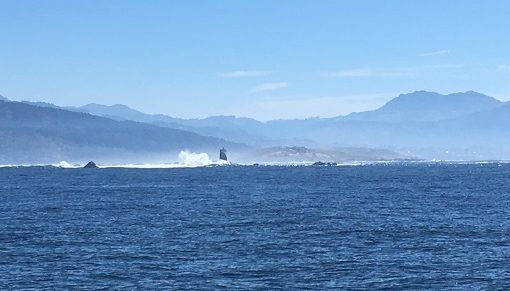 The journey from Illas Cies to Bayona was only 9 nm, even allowing for the slight diversion to ensure that we crossed the traffic separation zone at the entrance to Ria de Vigo at right angles as required.

After crossing the TSS we skirted around the Islotes Serralleiras watching the Atlantic swell break on the rocks.These provide some protection from the swell for the Baiona harbour, but some swell does still get in, as we were to experience.

The first sight as you approach Baiona is the peninsula, Punta del Buey, housing the impressive castle and the Baiona Parador (Paradors are swish state run hotels housed mostly in historic buildings, the chain having been established by Alfonso XIII in 1928). The Montereal Club Yates de Baiona (MCYB) sits at the entrance to the castle and we were headed there.

We arrived in glorious sunshine – this photo was taken as we left. 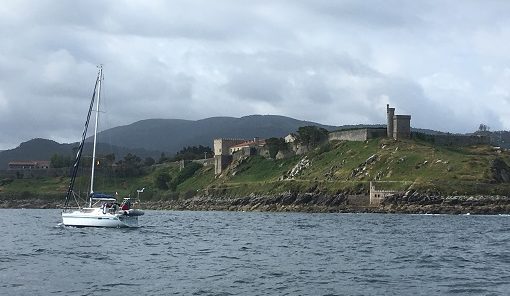 MCYB has a choice of two types of berth. One is the usual finger pontoon – a narow pontoon extends at 90 degrees from the main pontoon. You park up against and tie yourself to this finger.

The second type is more normally found in the Mediterranean where there are no tides and is variously called a lazy line or slime line. A stout rope runs at right angles from the pontoon and is fixed to the sea bed a few boat lengths away.

In May the cost of the moorings for our under 12m yacht is 22e a night for a slime line and 33e a night for a finger pontoon. But we arrived on 1 June, start of the high season, when the costs had risen to 33e and 49e a night.

We had heard that it is possible to take one of their mooring balls but we did not enquire about those (we may as well anchor for free rather than pay for one of those).

We opted for a slime line, as we needed to practice our “Med. mooring technique (not to mention that the difference would buy a very nice bottle of wine in a Galician restaurante!)

We had radioed ahead and a marinero came to help. In very calm conditions we could have coped without assistance, but today a slight but lively swell was entering the marina and we had a strong cross wind. It did not help that the marinero directed us to moor next to a pile, but with his help we coped.

We reversed up to the pontoon. The marinero passed the slime line to Val and Paul passed the windward stern line to the marinero. This was followed by the leaward line, but it was important to get the windward line attached quickly so that Paul could motor against it and  keep the stern off the pontoon – and (using prop. wash off the rudder) away from the pile.

Whilst Paul was doing this Val walked the slime line forward to the bow and pulled on it to keep the stern off the quay (after the engine is switched off). With the propeller still running to keep us off the pontoon Paul walked forward to lend some muscle to Val and pull in the slime line and attach it to a bow cleat. That done we can turn off the engine, 16 euro duly earned!

That said, we still had to jump the gap between boat and pontoon every time we got off the boat. We also had to keep an eye on the tide adjust the stern lines as the tide rose and fell. In the Mediterranean this type of mooring is the norm, but there is little tide to speak of. Here there is over 2m of tide. This means that as the tide rises the boat can be pulled tighly between slime and stern lines, risking popping off a cleat (especially with a swell). And at low tide the opposite happens – the slime line goes slack and the boat can bump into the pontoon. This is obviously more of an issue at springs than at neaps tides. So some of the 16e is earned by keeping an eye on the tide and not being away from the boat for too many hours on end!

To either side of the yacht club is a beach – this being the larger one, with the yacht club building shown on the left and to the right a replica of the Pinta – one of Christopher Columbus’ ships which called here and announced the discovery of America in 1493, with Baiona becoming the first port in Europe to learn of the new land.

The replica houses a museum and visits are fairly inexpensive (we will do that next time!) 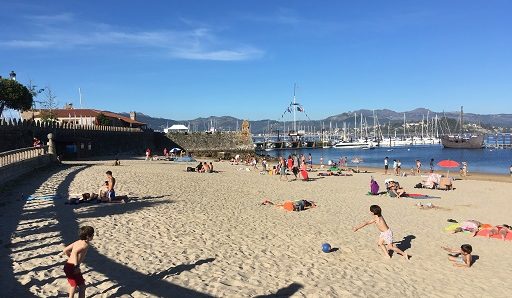 We headed out to tour the town. We had read and heard first hand what a wonderful place this is. We expected a grand square and swish boutiques and restaurants, but were disappointed. That is not to say that we didn’t like the town, just that it did not meet expectations.

There are numerous old buildings in the old part of the town, including one narrow street where many are employed as restaurants. But the main square is small, and with a large hoarding trying to hide a patch of derelict land to one side of it.

The shops are no different to any other similar sized town around here, and the seafront – other than the Parador/Castle/Yacht Club peninsula is particularly uninteresting and drab.

That said, there is an excellent ferreteria (ironmonger) well up the main shopping street (beyond the roundabout).

However the Castle, Parador and Yacht Club more than made up for the disappointment of the town and overall we had a very enjoyable stay here.

John and Debbie (Shiraz) were in Baiona and we met up on Sunday morning to walk around the castle walls and to have a drink at the Parador. The walls of the castle are remarkably well preserved and seem fully intact. We had read from another blog that there was a small charge for walking the walls but we saw no evidence of that!

The views from the walls were impressive – here looking across the Yacht Club and its marina towards the council run marina (with its portacabin facilities but, bizarrely, with prices on a par with the Yacht Club) in the distance.

For those looking at this on a laptop screen, Shiraz is in the anchorage beyond the council run marina -where we would spend our third night here. After a full circumnavigation of the walls we headed into the Parador for teas and coffees on the terrace. It is very expensive to stay here, but 4 hot drinks (each with a mini croissant) came to 8 euro!

Inside the beautiful building an older couple were having a celebration with family in the open courtyard – a golden wedding anniversary perhaps, but all were dressed in the colourful Spanish style!

We said our farewell to the Shiraz crew and headed back to Calypso to change for Sunday lunch at the Yacht Club. This is something that we had been eagerly looking forward to. We had recently read that a visiting crew had been turned away from this members club, but we felt that if we dressed appropriately and spoke our best Spansh we would not be turned away – and indeed we were warmly welcomed by the staff as we entered the impressive bar area. We enjoyed an excellent lunch on the terrace, including the best paella we had ever eaten.

We took our time and enjoyed the atmosphere and the views – with almost every other table taken.

And after lunch we sat on the terrace and enjoyed G&T’s in the hot sunshine. We met another British crew, Robert and Charmain of Falcon, moored just a few slime lines away from us. We compared plans for future cruising, and with Lancastrian Charmain teased Robert for his Southern roots – the Yorkshire/Lancashire rivalry being set aside in the presence of a bloody Southerner!

Our lunch at the Royal Yacht Club had not disappointed, and afterwards we retired to Calypso for a siesta, later enjoying a light tea and reflecting on another memory bank day that had made up for the minor let down that was the town itself. On Monday we paid our bill for two nights on the slime line, but hung around until well into the afternoon before heading out to the anchorage, which was less lumpy than the marina as we were not snatching on our lines.

Paul tried fishing – unsuccessful as usual, before we retired to bed in readiness to move on the next day. And the final photo of this log is of Val, posing with a couple of Citroen 2CV’s. Val’s first car was an orange one, and every time we see a deux chevaux she has to have her photo with it.

Here at the Parador was a vintage car rally. There were many more very interesting cars here – but Val’s favourites were the 2CV’s!

No accounting for taste!