A Week (or so) in Concarneau

Sightseeing as the weather breaks…..

The 12 nm trip to Concarneau was uneventful – we departed Loctudy, when the tide had risen sufficiently, into a flat calm day where the sails never saw the light of day. We set 2 waypoints along the leading line into Concarneau, but its daymarks were clearly visible from well off – confirming, if nothing else, that the waypoints had been set accurately as the autopilot steered us the last mile or so into Concarneau, keeping the daymarks bang in line.

It has not always been thus – Paul will not be allowed to forget the time that Calypso headed out to sea when he had forgotten to change “S” to “N” when entering a waypoint and the autopilot (now named Dotty for various reasons) tried to take us across the equator! He now checks the position of waypoints on the chartplotter before setting off. We suspect that is commonly regarded as good practice!

There are not acres of nasty little rocks off Concarneau, but enough to warrant a well buoyed channel and the daymarks pointing out the leading line. Some of this is in evidence in the photo above.

We decided to stay in Concarneau for a full week because:

Visitors are directed to either the inside of the “brise clapot” (wave break) or one side or other of pontoon D. We were asked to go to the hammerhead (“l’exterieur de ponton D”) on the radio (little English is spoken around these parts – and why should it be?) We checked in shortly afterwards and were asked to move to another berth in pontoon D as the hammerhead was reserved for larger boats (so why ask us to go there in the first place then? However we are happy to practice berthing in light winds in a well protected marina such as this).

The weather was good for the first few days of our stay. Parked under the ramparts of the amazing old citadel, entirely surrounded by water, we watched boys jumping off the ramparts at high tide: 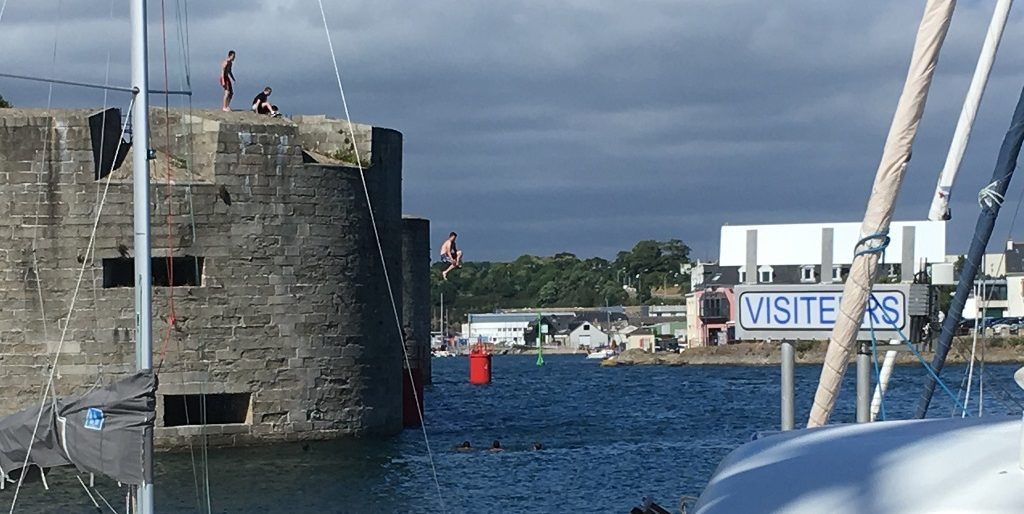 Inside the old citadel are numerous shops and restaurants/creperies, as well as a couple of museums to visit (fishing museum and something about the citadel) – which we gave a miss. However we enjoyed walking through the citadel: …..and around its ramparts: Val’s Sister Anne and niece Phoenix came to see us – taking Val to lunch in Benodet whilst Paul played golf at Golf De Cornouaille in nearby Foret Fouesnant – here are the girls having a drink in the shade at the clubhouse. Paul reported his best round for ages but for once, faithful caddy Val is unable to verify! At least Paul cannot romance about the size of fish he has caught – this being the only one of the trip so far: We walked to the Chateau de Keriolet – built by a Russian Princess in the 19thC. She bought a local commoner 2 titles so she could marry him, and built the chateau that he enjoyed for 4 years before his fatal heart attack. We had a guided tour in French, but with a crib sheet in English. French visitors seemed to get 5 times as much information from the tour guide as we did from the sheet, but it was a very enjoyable visit and the Chateau has a very interesting past. It is currently in private ownership, the owners living upstairs with just the ground floor on view.

You probably can’t see the mineral felt roof – applied after a great storm in the 1980’s. The 6.5e entry fee and the sale of sculptures, displayed around the grounds, are not going to replace this roof any time soon! The owner is slowly renovating the chateau and opening new rooms to view from time to time. We bought a “carnet” of 10 bus tickets for the Finisterre region buses for 15e – normally any trip is 2e, but we intended to do more sightseeing by bus and acquired these from the tourist information – we should have done this when first arriving  at L’Aber Wrac’h.

We first visited Pont Aven – an area favoured by artists after Gaugin painted in the area. There must have been 25 to 30 art galleries in the large village – we visited many of them but came away empty handed (most not being to our taste and the couple that were seemed well overpriced). We enjoyed the visit though, and whilst walking around the galleries was the highlight of the visit, the village is very pretty: Val said she was about as likely to catch a fish in the stream using this method as I was with my huge collection of fishing tackle. She had seen this method at a falconry display. Not unsurprisingly, the score remains nil-nil!

We saw our first rain of the week at Pont Aven and the following day was to get worse, so we jumped on the coach again; this time to the large-ish city of Quimper, with its Cathedral and mediaeval half-timbered buildings on cobbled streets: How French is that?!!

Staying with the “French” theme, Concarneau has one of the largest markets in the area every Friday (and a smaller one on Monday). Given that we overstayed our week we went to the Friday market twice. The shopping trolley is no longer a source of amusement – every seasoned French market goer has his or her “chariot”. Chariot for goodness sake – here in the UK I get laughed at for dragging a granny shopping trolley around – here in France I am a shopping gladiator with my CHARIOT!

Ok so the hat is not so butch, but it was baking hot last week and I can’t keep wandering around with a reversed baseball cap to stop my neck burning – and this was the best solution (not been used since as the weather turned – it is a utilitarian piece of clothing, not a fashion statement. Stop sniggering at the back!) There is also an excellent indoor market, open every day: ………..and a large and much cheaper poisonnerie at the rear of the large port (apparently France’s 3rd largest fishing harbour, so we read, but whilst we have seen a few very large trawlers, we haven’t seen that many).

We had walked West along the  seafront from Concarneau and not been particularly impressed. However on our last full day here we took the little electric ferry that runs from the end of the citadel to the other side of the port/river:

That led us to a much prettier coastal walk, with views back across the town: 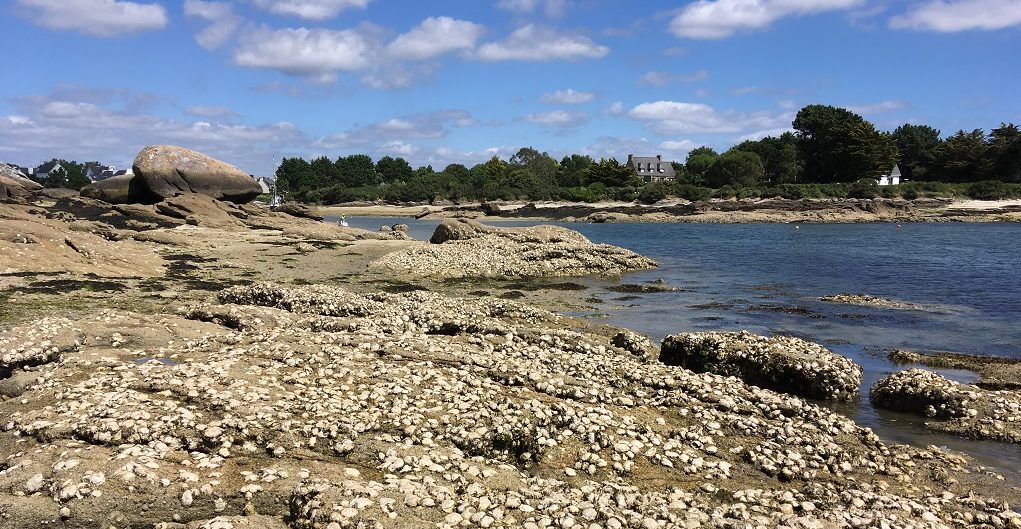 We picked half a bucketful of oysters – and discovered why the natives do not bother with them: eating oysters (to Paul, not Val) is like eating wonderfully fresh essence of sea life. However these had a slight essence of rotting seaweed! We have seen many commercial oyster beds at low tide – with metal baskets of oysters suspended above the sea bed. For the first time this year (at L’Aber Wrac’h) we had watched the baskets being shaken and turned. The shoreline in the photo above was of slightly muddy sand, whereas perhaps commercially grown oysters enjoy a less muddy surrounding as well as being raised above the silt? Whatever the reason, the oysters that Paul ate in a restaurant in Concarneau were superb – but these were not!

We had oyster linguine that night, hoping that cooking would improve the flavour – and thanks to some powerful ingredients it did – but the mildly unpleasant background was still there. However – we did it:  we harvested wild oysters and survived without incident – we ticked that one off the list (once – but never again!)

We later discovered that the Adam and Lynne were doing the same thing on one of the islands they sailed to. They ate them raw and Adam suffered no ill effects. Unfortunately the same couldn’t be said of Lynne!

Whilst the Bisphams had joined us here for a few days, we spent the rest of our time sightseeing, sourcing and eating good food and DRINKING RESPONSIBLY! Our livers are ready for the next onslaught when we possibly meet up again in Vannes – if we can work out the currents in the Morbihan. Paul has spent time doing so and is drumming up the courage to enter the inland sea where tides run up to 9kts (much faster than we motor) through narrow channels. There is surprisingly little advice in the pilot guides and online on timing and tackling access in and around the Morbihan. More on this later – maybe!