Back to Xufre, Back In The Water – EEK!

2020 had been a surreal year for all of us, but light at the end of the tunnel appeared at the very end of the year in the form of approvals of Covid vaccinations. By the middle of May 2021 we had both had our two injections and felt confident enough to book a ferry to Spain.

Brexit also had its impact on our plans, as now we were out of the EU we would only be allowed 90 days at a time in the Schengen Zone, with 90 days outside before being allowed back in. This year we were more than happy with the 89 days we managed to achieve with the Britanny Ferries timetable, booking to travel on 16 June with a return date of 13 September. We decided to extend that with a week’s holiday in England as we made our way to the Plymouth ferry terminal. Last year Val had worked out how to turn our trusty old Berlingo into a camper van. Sadly, we had experienced a few problems with it and decided that the time had finally arrived. The much loved old Berlingo was swapped in for an ex-demo model; and what an upgrade that has turned out to be – satnav, aircon, cruise control and best of all an extra 25cm legroom in the sleeping area so that Paul can fully stretch out! We also acquired a “drive-away” awning, and our posh new set up was complete.

And so en route to the ferry we stayed on the driveway of Neil and Liezel, who we first met in the campsite in the citadel of Blaye at the end of the second year of our travels. We then had two nights at a campsite near Leominster, where Paul had his first job and still had friends. Val loved the countryside that Paul had often spoken about, and it was great to meet up with Martin again.

There followed a night near Gloucester with great friends Chris (who runs this website for us) and Barbara. We had been due to share our 30th anniversaries together but that was a Covid cancelled event! They had only recently moved into their new home after moving back from Spain. Covid had delayed them from retrieving the contents of their Spanish home, but they had settled in nicely.

On the way there we pulled into the largest vineyard in the UK – 3 Choirs. We bought a bottle of their Bacchus white wine for each of Alex and Nito at the Xufre boatyard to thank them for their kindness and (hopefully) show them that the white wine in England is not too far behind the fantastic white wines of Galicia. Thay had kept us advised of the situation in the yard, sending photos of Calypso now and again. They sent us (and all other British owners in the yard) a letter to confirm that Calypso was at Xufre on Brexit Day, needed to ensure that we retain our EU VAT paid status. Finally we pitched up at a site near Truro in Cornwall for three nights. On the second day we drove away from the drive-away awning and headed to Newlyn, where we took another Covid test and stayed overnight on Charisma. We had sailed with the Charisma crew on and off for the previous 3 seasons in France and Spain, and we would miss them as they were remaining in Blighty this year (their plan to visit Ireland and Scotland perhaps scuppered by Irish Covid restrictions).

We had lunch together at a very lovely fish tapas bar, Mackerel Sky, which reminded us of our time together in Galicia (and of the great seafood in France with them before that).

By the time we boarded the ferry we were well into holiday mode. Fortunately the weather was warm as we headed out of Plymouth and we had a couple of celebratory drinks on deck.

Sadly, after a week of lovely English summer and a cruise-liner-like crossing, as we arrived in Northern Spain it rained. And it poured down. In the 5.5 hour drive to Xufre the windscreen wipers were only rested for 30 minutes, And for the next 2 days the weather interrupted our preparations. And when Val did get her painting overalls on, Paul was too busy for the customary annual “Glamorous Val” photo. So here’s the before antifouling shot!

We were very pleasantly surprised by the condition we found Calypso in. Unlike when we visited her in September 2020, on this occasion we did remove (rather than re-secure) the coach-roof cover, and we did take clothing and bedding out of bags and generally tidied up.

Under the cover Calypso was naturally grubby. Green algae was in the usual places but thicker than normal, and it took Paul around 4 hours just to pressure wash and scrub the top deck. Inside was cleaner than we expected, and overall, whilst we had a lot of work to get Calypso ship shape, it could have been much worse. We had very little affected by mould.

The engine had been serviced at the end of last year, but other jobs included:

And on top of that we did cleaning and more cleaning, and before long Calypso was once again feeling like our second home. We would fit sails after getting into the water.

Whilst we were held up by the weather we had resolved that we were not going to overwork ourselves and end up exhausted for the first week out at sea (as has happened before). And so we took advantage of the nearby hostelry (A Meca) and ate out a few times – including twice whilst watching England at the Euro 2021 football tournament.

One of the good things about being in Xufre is that they are happy for us to leave the Berlingo in the yard whilst off sailing. With the old Berlingo we were happy to leave it anywhere and just leave the keys. And when somebody splashed it with varnish we were happy to have that as a bit of the history of the car. A battle scar! However we didn’t want the nearly brand new Berlingo to suffer the same fate. So Nito showed us a corner where we could keep it, where it would not need to be moved. We cleared farther into the corner and left it here with a cover, just in case! We also left inside the cruising chute (not yet rigged for action), boat cover, ladder and a few other bits and pieces that we don’t need aboard. This will make it much easier to have one clear cabin for guests without the other bursting at the seams. Eventually the delayed launch day came. We have to admit to a large degree of trepidation. That was compounded as Alex, who usually moves the boats, was off sick. His colleagues were roped in and were equally careful. Although we did have a false start when the small travel lift ran out of fuel and a forklift truck was deployed to bring the fuel bowser. Then it was time for lunch and that runs to 2 hours here, so our jitteriness was prolonged.

Finally, the small travel lift took Calypso to the mammoth travel hoist – which picked us up and splashed us down, hitting the water for the first time in 20 months. We started then stopped the engine and Paul went below to check for water ingress under the bilges and whether the antifreeze needed topping up.

Now here our command of the Spanish language let us down. Paul thought he had accurately conveyed the message that he wanted to be lowered into the water but held in the slings for 10 to 15 minutes to allow him to undertake the aforementioned tasks. However, as he was checking the antifreeze Val shouted for him to get his ass on deck – the lift had slipped us and we were drifting! 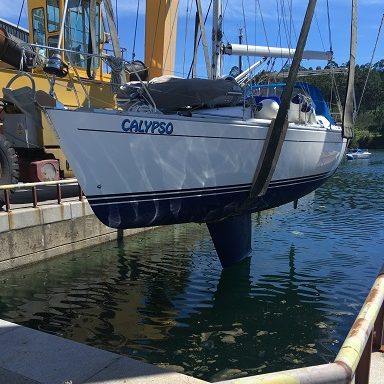 Fortunately antifreeze levels were ok (a cupful was added later) and so cap back on Paul jumped back on deck and started the engine rapido. Fortunately he had assembled the feathering prop correctly and we reversed easily out of the hoist bay, Val going below to check bilges (still dry, phew!) Alex, who usually operates the lift does speak very good English. Next time if his colleague lifts us in we will get Noa from the office to translate!

– With that we travelled swiftly (compared to the old prop) across the ria to re-start our travels in the sheltered anchorage off A Pobra Do Caraminal.

Our jitteriness quickly faded to be replaced with broad grins and the sheer joy of being on the water again.

And anchoring went without a hitch. Sailing is like riding a bicycle – we were rusty but it all came flooding back! Over our 4 nights at anchor here we headed to our favourite restaurant, Nojira, to be greeted like old friends by Luis. He didn’t disappoint with his food either, the gazpacho of watermelon, beetroot and cucumber (with feta, walnuts and dressing) being a particular surprise. We took the recipe away with us!

We took our favourite walk yet again, around Punta Ladina and Punta de Cabio at low tide – the photo of the anchorage seen from this walk (Calypso is the yacht at anchor on the right). We brought back foraged mussels for a surf and turf (veal) meal aboard, trying (not successful aesthetically but it was very tasty) to emulate the inventiveness of Luis…….

We had a very peaceful 4 days and nights here, spoiled by only two things:

One – the nearby yacht crew went ashore at night for a few hours leaving their mutt. One of our peaceful nights at anchor was ruined by the damned thing which literally didn’t draw breath for barking constantly until they returned.

Two – we hoisted the genoa successfully but when bending on the mainsail Paul had a moment of madness and pulled the aft end of reef line number one into the boom. The concensus on forums was that this would involve drilling out rivets to remove the boom end fitting, extracting the offending reef car being careful not to lose small wheels that take delight in pinging overboard, and most suggest maybe leave it to a pro……Paul decided that maybe he had overworked in the yard after all and that this should be left until the brain fog clears. To be continued at our next stop…….

However that was all forgotten when on our last night Paul won a prize for dancing!

Motor yacht Sunrise came into the bay and did a tour of the harbour whilst thumping out very loud (but fortunately to our taste) music over a full blown disco sound system. The children on the top deck were dancing away as they passed us and Paul jumped onto the helm seat to perform his best “dad dancing” routine, using the arch to really bust some moves…….

When the skipper/DJ took another tour around Calypso and played “God Save the Queen” at full volume Paul waved the ensign, saluted and stood to attention, much to the amusement of both the children on deck and the skipper, who reversed up to us and had his brother award Paul with a bottle of Albarino wine for services to entertaining children!

Our next stop would be Riveira, our berth there pictured at the top of this blog – showing motor yacht/disco boat Sunrise on a mooring ball just outside the marina.