When we arrived back at San Adrian we had a few days left on our one month contract in the marina. Charles and Di of Astraia were there for a few days having a canvas company from Vigo finish off some side screens for their bimini and we spent a little time with them – watching the Federer Nadal semi-final from Wimbledon and having dinner on two nights.

Astraia will winter somewhere between here and Lisbon, before they head across to the Azores next summer – braver than us, that’s a good few days at sea!

We finally left San Adrian and (contrary to the title of this post) motored around 8 nm against a light breeze to anchor at Praia de Limens. On the last occasion we had been here we never landed on the main beach, opting for the small beach to port on entry into the bay. Calypso can be seen at anchor second from left at the top of the photograph above. 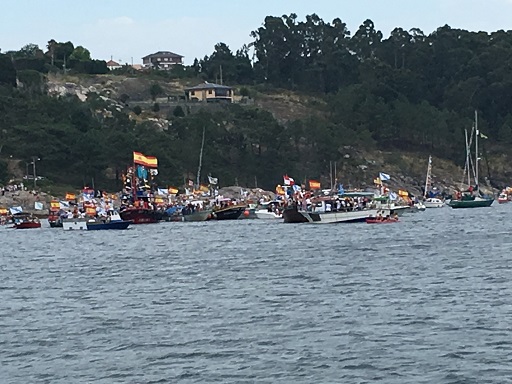 This time we would explore the main beach and the facilities behind it. As we arrived we could hear the familiar explosions from a festival in the direction of Cangas, next bay East. Shortly afterwards the flotilla, celebrating the Dia de la Virgin del Carmen came into view. This is celebrated in coastal towns and villages throughout Spain on 16th July, and we recalled seeing a similar flotilla on this day last year in La Coruna.

The Virgin is the patroness and protector of all seamen, fishermen and scuba divers. According too legend she is responsible for keeping the waters around the shore clean and safe; many devotes used to refuse to swim in the sea until after July 16th! (www.spanish-fiestas.com)

There were probably 40 or so leisure craft and fishing vessels taking part. At one point we joined in the cacophony of horns with our pathetic sounding foghorn! People were gathered on rocks at the point where a priest boomed a sermon over powerful speakers, and then a lovely voice sang a traditional song A capella.

At the end of this more rockets were fired and the horns sounded out again. In the photo the smoke trail of a rocket can be seen.

After this slightly grey day the weather picked up and we went ashore in the dinghy. Up a steep hill is a small shop selling provisions and we bought lunch to eat on the beach. As Val sunbathed Paul went in search of bay leaf and rosemary for a dish of calamari with sun-dried (on Calypso) mushrooms, rosemary, bay leaf, onion and chilli. This was to be cooked for Adam’s birthday, with the crews of Charisma and Shiraz due to arrive for the celebration the next day.

The walk took him along dunes to the rear of the beach and through a lovely village with a variety of old and newer house – fortunately with just the one having a rosemary bush within reach!

Gardens abounded with kiwi fruit and grape vines, lemon and various other fruit trees including one groaning under the weight of fat juicy peaches.

Whilst Galicia is wetter than Mediterranean Spain, the summers are warm but not overbearing and we love the green landscape for it – and the climate is ideal for the numerous allotments growing many kinds of produce in abundance. 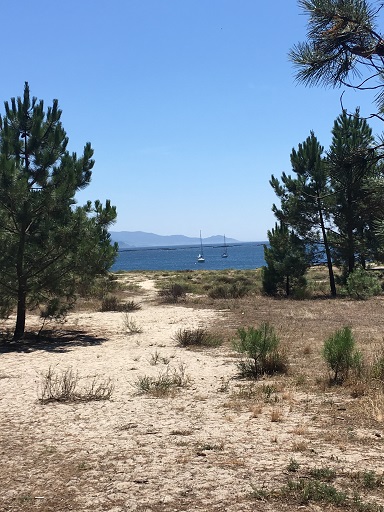 The next day Shiraz and Charisma arrived. Lynne had bought Adam a paddleboard for his birthday. Debbie already had one and we were intending to have a beach and paddleboard day – but unfortunately it was too windy – and so we rendezvoused at Charisma for Adam’s birthday party at 8pm.

When we finally left at 2am (great party) Paul could not start the dinghy but fortunately we drifted backwards and bumped into Calypso. Next day the diagnosis of the problem was that the fuel tap had been turned off! At least we had not been too away with the fairies to put our lifejackets on (and we had oars)!

The following day was one of recovery – we blogged and scrap-booked, and slept but never left the boat. Well it was windy! And the following day we went ashore and walked across to Aldan (about 3-4 miles round trip) for lunch in a secret garden behind one of the lovely beaches there – but more on Aldan later.

Returning to Limens beach, we had left the dinghy in the marked channel for pulling dinghies and windsurfers on and off the beach (there is a sailing school behind) – but the lifeguard came across and apologetically told us that we were not allowed to have dinghies on the beach, so we abandoned our intended sunbathing session (much to Paul’s relief) and went back to the boat. That evening we had a quiet card game aboard Charisma and retired early, still recovering from our partying excesses! We were moving on the next day and a clear head is always preferable for that. 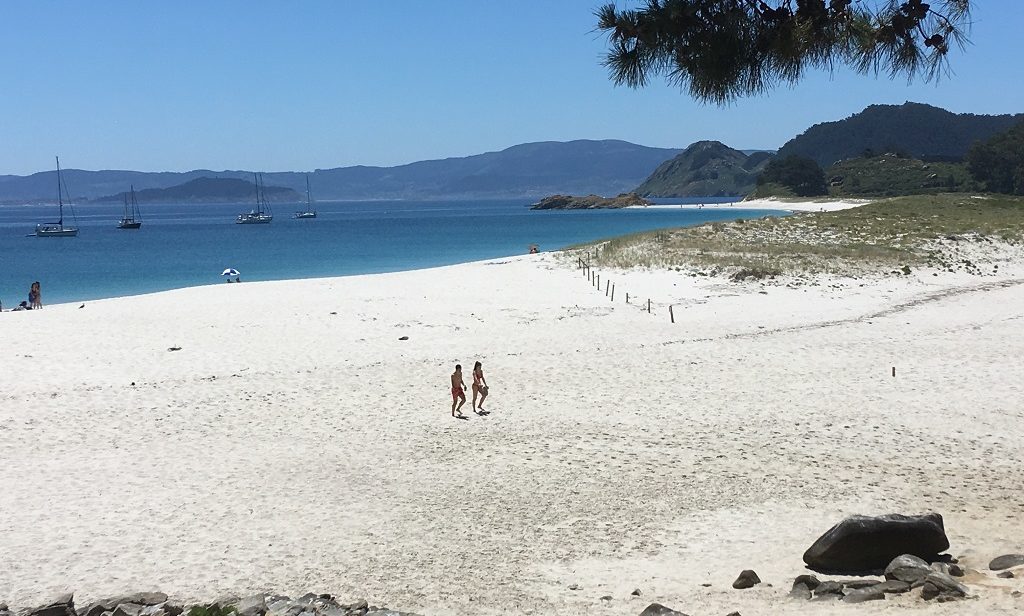 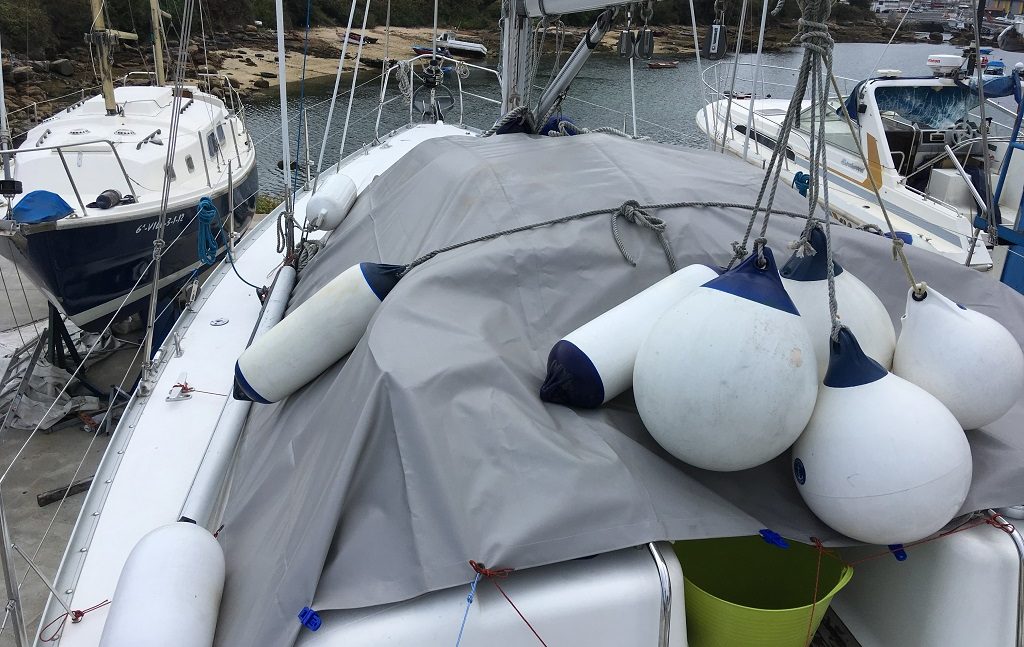 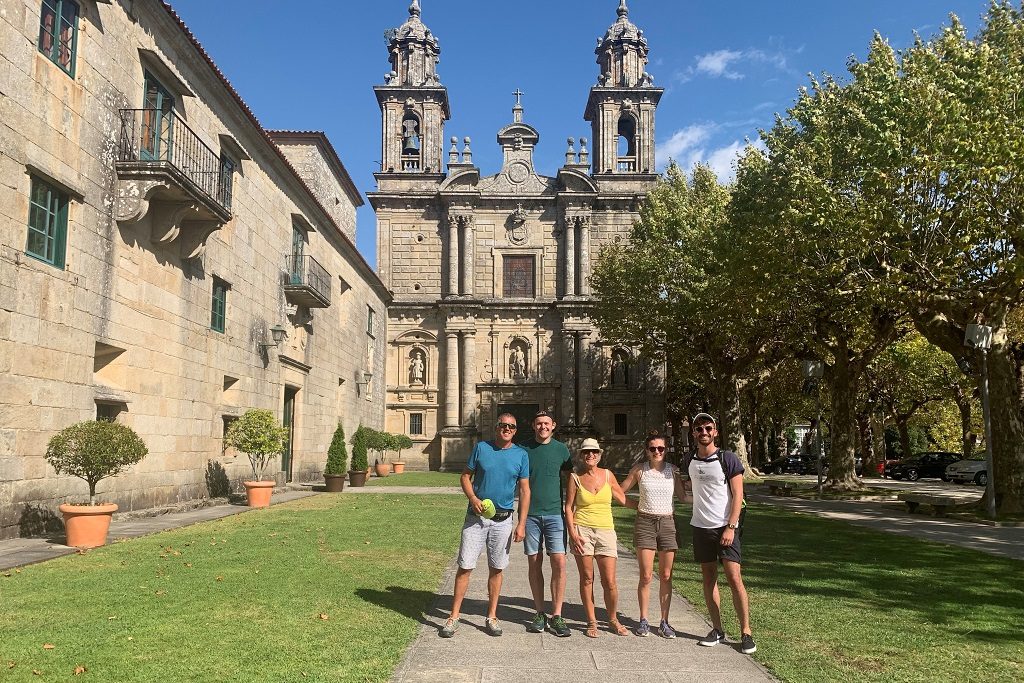