We had wanted to visit Finisterra on our way south last year but the wind was not suitable for anchoring off Praia de Langosteira just North of the town and so we anchored off Praia de Sardineiro, which was a little too far for us to walk to the end of the world.

We now know that Finisterra is not the most Westerly point of Europe, that lies a little to the North, but back in the day this headland was taken to be so.

It is an important part of the pilgrims’ way, the Camino de Santiago. Once pilgrims have arrived in Santiago they then walk to Finisterra to throw their sins off the end of the world. Tradition was that many would burn clothes and discard the boots they have been walking in, and we wanted to witness pilgrims finishing their epic journey.

We left Esteiro on a calm but overcast morning and motored the whole 21 nm to Praia de Langosteiro. As we were leaving Ria de Muros y Noia we saw a vast shoal of fish with tail and dorsal fins breaking the surface. The shoal was not tightly packed – it extended a couple of miles – we don’t know what they were, but each and every one of them turned its nose up at Paul’s lures – 3 different ones in all. 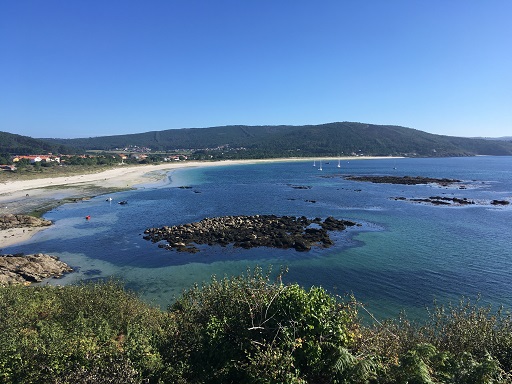 It took 4.5 hours from engine on to engine off (including raising and lowering the anchor). When we arrived at Praia de Langosteira the were 2 yachts in the anchorage. It was grey and damp and so we had a film night rather then going ashore.

Next morning dawned clear and bright, and 4 other yachts had arrived at the anchorage, including the one next to us which had a pram on the bow |(hopefully strapped down!)

We launched the dinghy, motored across the bay to the end of the beach just North of the town and set off. Looking back, Calypso is seen in the anchorage in this photo (get your magnifying glass out!)

We did see the odd pilgrim on the walk into the town, but signs old and new told us that we were heading the right way! 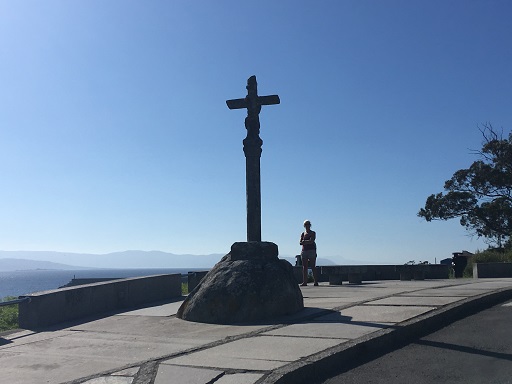 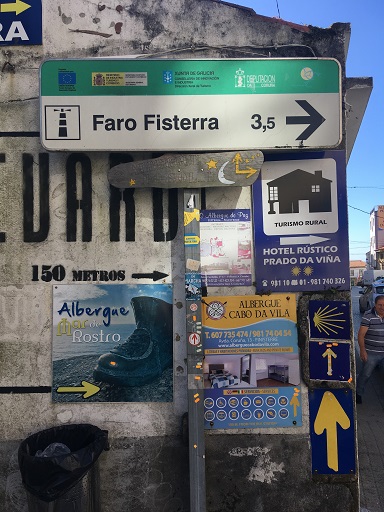 The town itself was rather more attractive than we had imagined when sailing past. The harbour is overlooked by a jumble of colourful buildings spilling down the hillside into the harbour, together with the very new and futuristic looking lonxa (fish market). The lonxa looked a bit OTT to us for the size of the harbour, but someone obviously knows how to fill in a request for a funding subsidy! 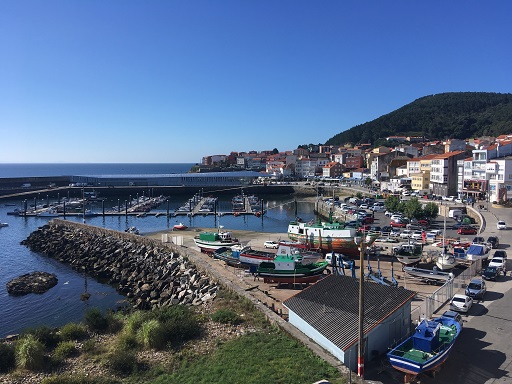 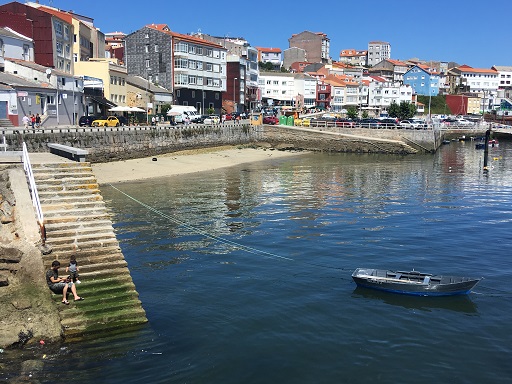 We followed the yellow and blue signs pointing out the route of the Camino. On the edge of town we came to our last church on our own mini pilgrimage (we have walked parts of the Camino and visited many religious sites along the way).

This one has no name – well we’re sure it does but we looked for a name and couldn’t find it. However inside we found a few pilgrims paying their respects, and as usual lit candles for our dear departed.

And we found more superb religious art. The one shown must be the Saint Carmen, patron of fishermen and seafarers, here depicted saving souls from a raging sea. Calmly. Babe in arms. And not losing her crown in the process! 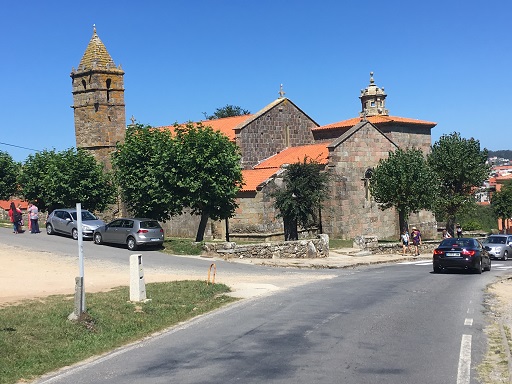 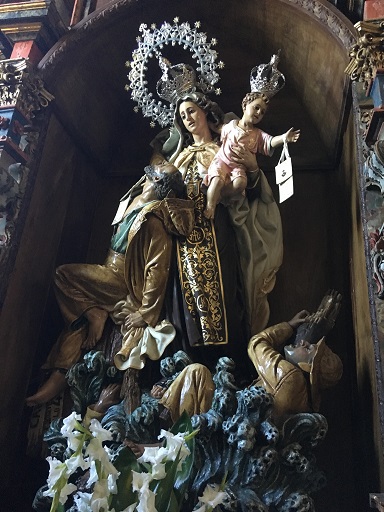 We had read on another blog that the road to the end of the world is uphill all the way, surprisingly busy and with no footpath. The first two statements remain true, but there is now a footpath.

And at the side of the path we came across a statue of the King Alfonso, who was credited with the first pilgrimage to pay respects to the remains of St James the Apostle in Galicia in the 9th century. 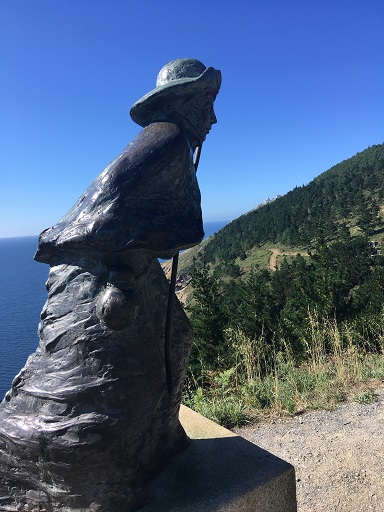 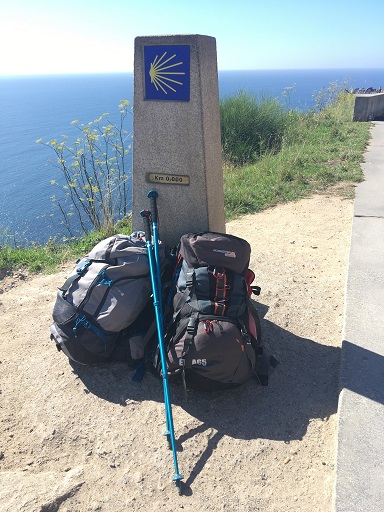 Along the climb we came across markers indicating how far the pilgrims still had to walk – until we reached this one, reading 0.000 kilometers.

Two pilgrims conveniently posed their rucksacks for this photograph, whilst others patiently awaited their turn.

Beyond the marker signalling the end of the route sits the Finisterre lighthouse which we had sailed past twice (well, motored yesterday but sailed around in 20+kts last year). Beyond that the rocks descend steeply to where the pilgrims cast off their sins – raising their arms aloft as a sign of relief and joy maybe?

For pilgrims this is said to be the end of one journey but the start of another. 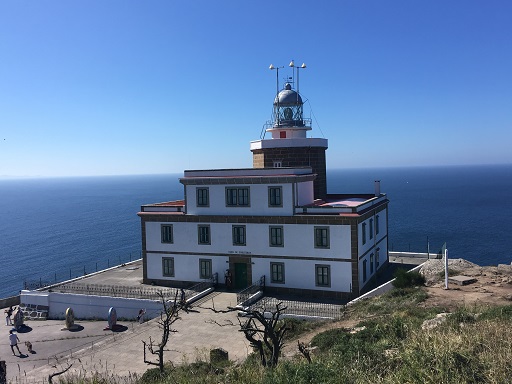 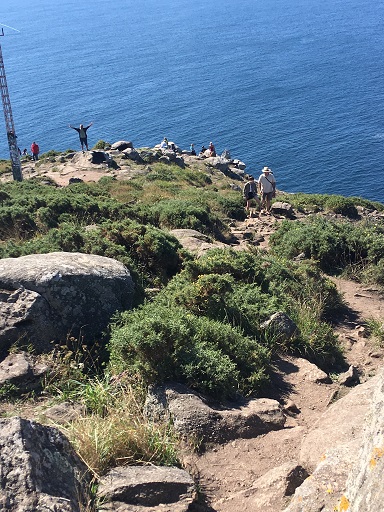 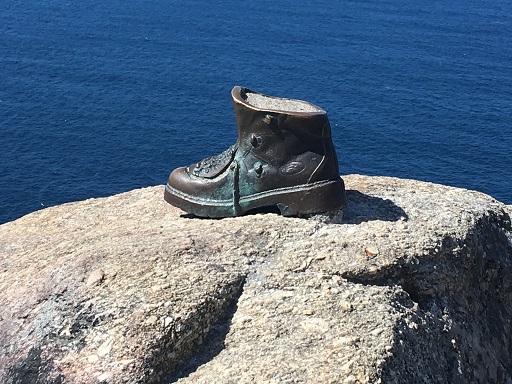 And we understand that traditionally many pilgrims would burn clothes and cast off their boots worn along the final section as a sign of internal renewal, to give space to new things.

We did see evidence of this – one pair of shoes high up on a radio mast and another draped around a statue.

This boot, however, is cast in bronze and bolted into the rock!

However we didn’t see anyone setting light to their clothing as this tradition is now banned!

We had arrived early at the end of the world, and as we left the car parks were full and the road even busier than before.

We headed straight through the town to have lunch at a bar recommended by Adam and Lynne from their visit last year. The World Family bar is a hippy place, full of interesting characters and with music played in turns by many.

On our way back through the town we were persuaded to part with 50 cents to buy a postcard designed by the bearded character who sold it. Val said that he must be on his was to the same bar, and indeed shortly after we arrived he stepped into the bar to part with some of his proceeds in exchange for a beer.

He sat with us and told a story of the love of his life, a model photographed by the world’s most famous photographers. Her father was a Nazi general with many interesting tales, one spinning off the last. We were fascinated by this character – parting with another 2 euros for another of his designs! 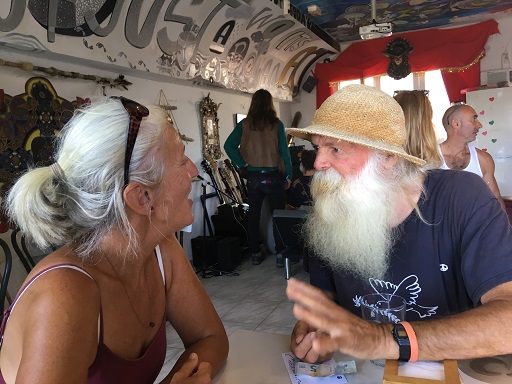 There were a few good looking bars overlooking the harbour, but we were pleased that we had followed the recommendation to come here, unprepossessing as it looked.

We particularly enjoyed the rendition of “Besame Mucho” (kiss me lots) by the charismatic owner. He was accompanied on bongo by a young man who arrived shortly after us, sporting a huge rucksack having just finished his own pilgrimage, to be greeted and hugged warmly by all as a long lost son! 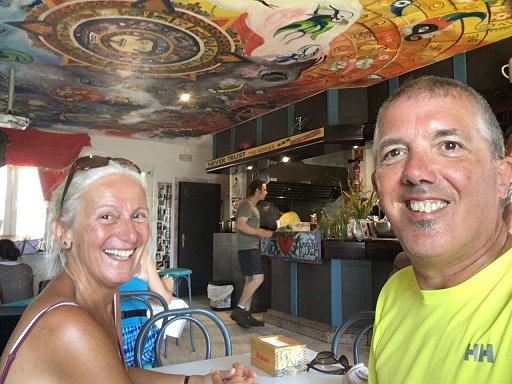 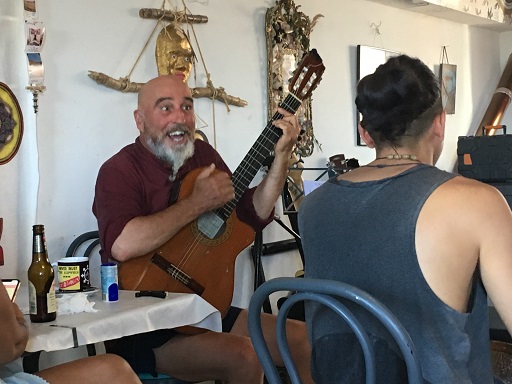 After our vegan lunch we returned to the dinghy waiting for us on the beach.

We would have loved to have spent more time here but the weather forecast dictated that we should move on.

We do hope that one day we might return and spend more time here. 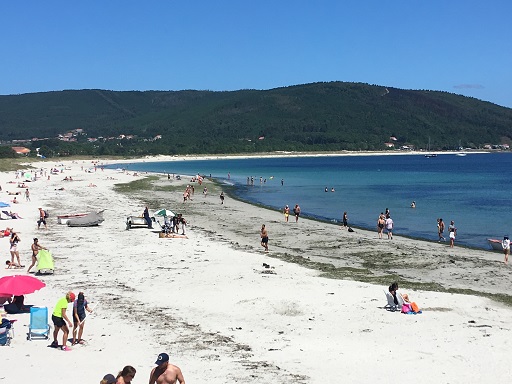