So we left Ribadeo with the promise of an East wind, hopefully with some North in it, of a strength that would see us sailing pretty much all the way to Vivero, 33 nm away. All the forecasts agreed. Sadly, all the forecasts were wrong and once again we found ourselves slogging under engine into a Westerly!

Fortunately the wind did veer slightly, and we had the last hour or so sailing nicely into the Ria, under the watchful eye of the Guardia Civil cutter, which came out to look at us, circled and then lost interest.

We dropped anchor for the second time this year, off the beach just outside the Viveiro entrance channel and in about 5.5m. This anchorage is sheltered behind the Cileiro harbour breakwater and we were in for a very calm night – as far as the sea state was concerned.

As dusk approached a funfair on the beach pumped up the volume. We were quite some distance off, but the base especially throbbed across the water. This was accompanied by fireworks – nothing pretty, just huge explosions! We actually enjoyed the atmosphere, although not when more huge explosions awoke us at 04.30!

Whilst we had a forecast of very little wind overnight we wanted to set the anchor riding sail that Paul designed and Val had sewed – partly to check that we had the geometry right, and perhaps we had lost some faith in the forecasters who didn’t seem to have this area sorted.

The riding sail is made from a dinghy spinaker pole, part of an old genoa, some webbing and D rings. The luff has a pocket within which the pole sits to keep the luff taught. This is tied down to the boom/lazy bag (with the riding sail bag wrapped around to prevent chafing the lazy bag) and hauled up by the main halyard.

The 2 clews of the sail plus top and bottom of the luff have D rings attached by webbing, and lines from these run to the aft spinaker line turning blocks on the toe rail and then to a cleat. The two parts sit at an angle of around 90 degrees (ie each is at 45 degrees to the centre line). Head to wind, pressure on the sails is equal. As Calypso dances around the anchor chain (or mooring ball, and she does this a lot) the pressure increases on one side and is lost on the other. So the theory is that dancing around is much reduced, and in big winds and swell this will reduce snatching. Those who have them swear by them – whether ours is quite big enough or will be effective – we will report back! 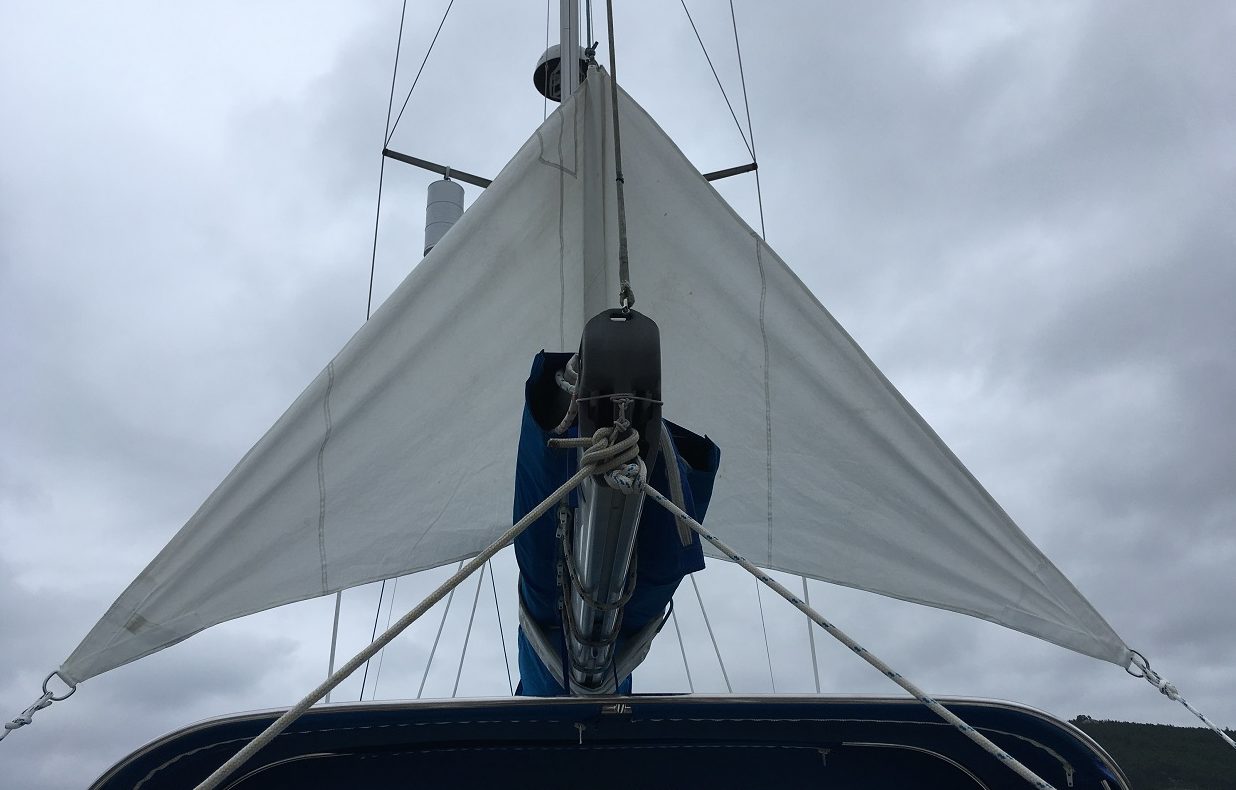 After our mostly peaceful night at anchor we had to go into the marina as friends Neal and Liezel were arriving for a visit. They tour around Europe on their BMW motorbike, carrying a surprisingly large tent! They were visiting Northern Spain this year and we had arranged to meet.

As we entered the channel at low tide we soon realised that the promise of the channel being dredged and maintained at 3m below chart datum was not delivered at the entrance – where with the 0.5m low tide we only saw around 2.9m at one point. This was only the case very near the entrance – elsewhere there was plenty of depth.

We arrived at the marins and tied up in the fairway between the first and second pontoons as instructed. We checked in to find a daily rate (up to 12m) of 33 euros, but with a 15% discount with a Northwest Marinagroup card they gave us on day one. If we stayed 5 days that would increase to 20%, and from 7 days to 25%.

The showers were in portable buildings at the side of the office – cramped but always spotlessly clean, with a continuous flow of hot water (ie not the irritating press button type). Wi-fi on the pontoon is non existent (there is a signal but no internet connection in that area) but is ok in the office, where there is a pleasant area to work from. We were entirely happy with the facilities here and stayed 8 days.

After emptying the contents of the starboard aft cabin into the port side and settling our guests in we headed off to walk up the hill behind the marina to San Roque – the site of a miracle at the top of the hill many moons ago.

Walking through the town we came across these boys (modelled by Neal and Liezel): Apparently Viveiro puts on the largest Semana Santa festival and parades in Northern Spain – a celebration of holy week at Easter. We found a door open next to a church and wandered into an enclosed cloister: Around the cloister were displays – being the life sized religious effigies that are carried around the town during the celebrations, followed by different brotherhoods, each wearing a different costume, usually with tall pointy hoods. From our experience elsewhere, these brotherhoods (8 of them totalling 3,000 people in Viveiro) follow the effigies, carried on sweating, swaying men to the sound of loud drum beats and wailing trumpets. It is a spectacle to behold, with many thousands of spectators, and here in Viveiro the effigies include a full lifesize last supper, carried in its entirety on the shoulders of those sweating men! 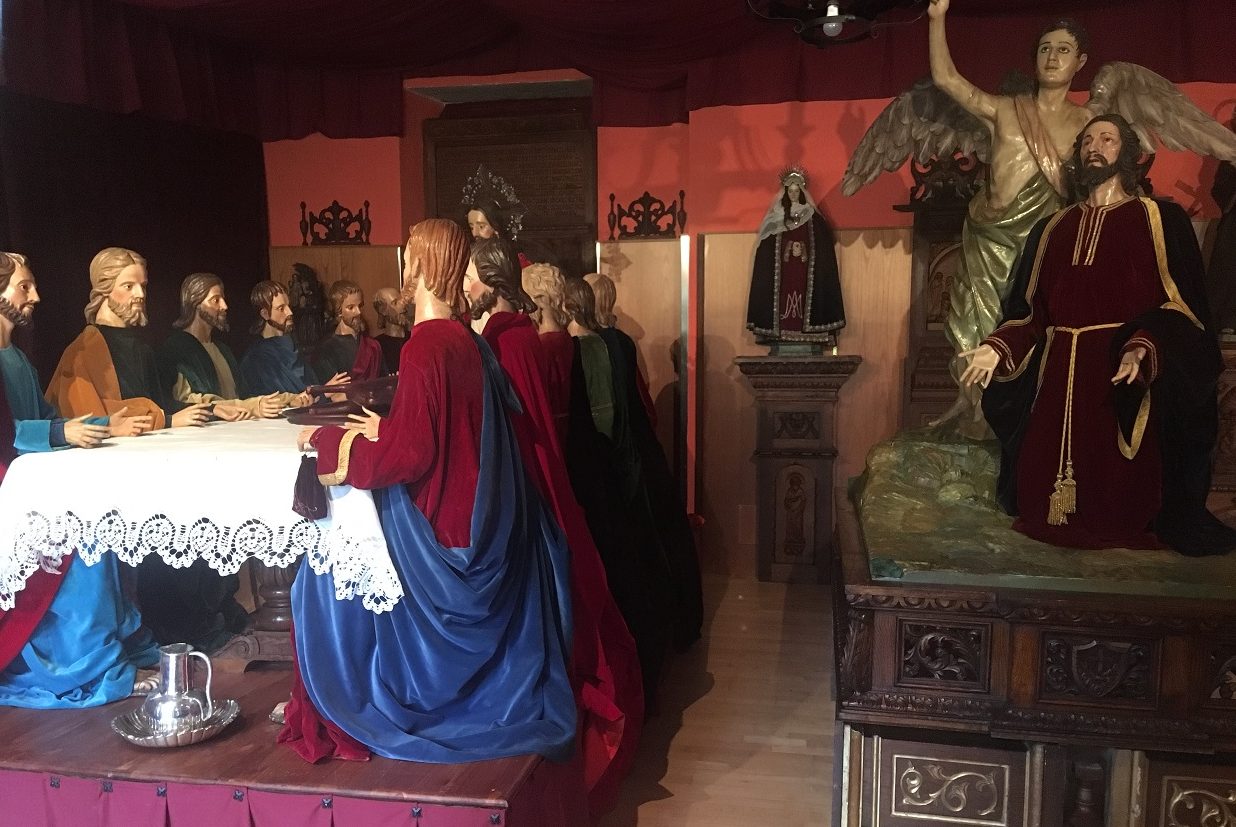 After that we climbed to San Roque – a long and fairly steep uphill walk on a road. Any paths through the eucalyptus forest were overgrown, and not wanting to encounter ticks (or more snakes) we stuck to the road. The view from the top was worth the effort – here looking up the river that we would later walk along: 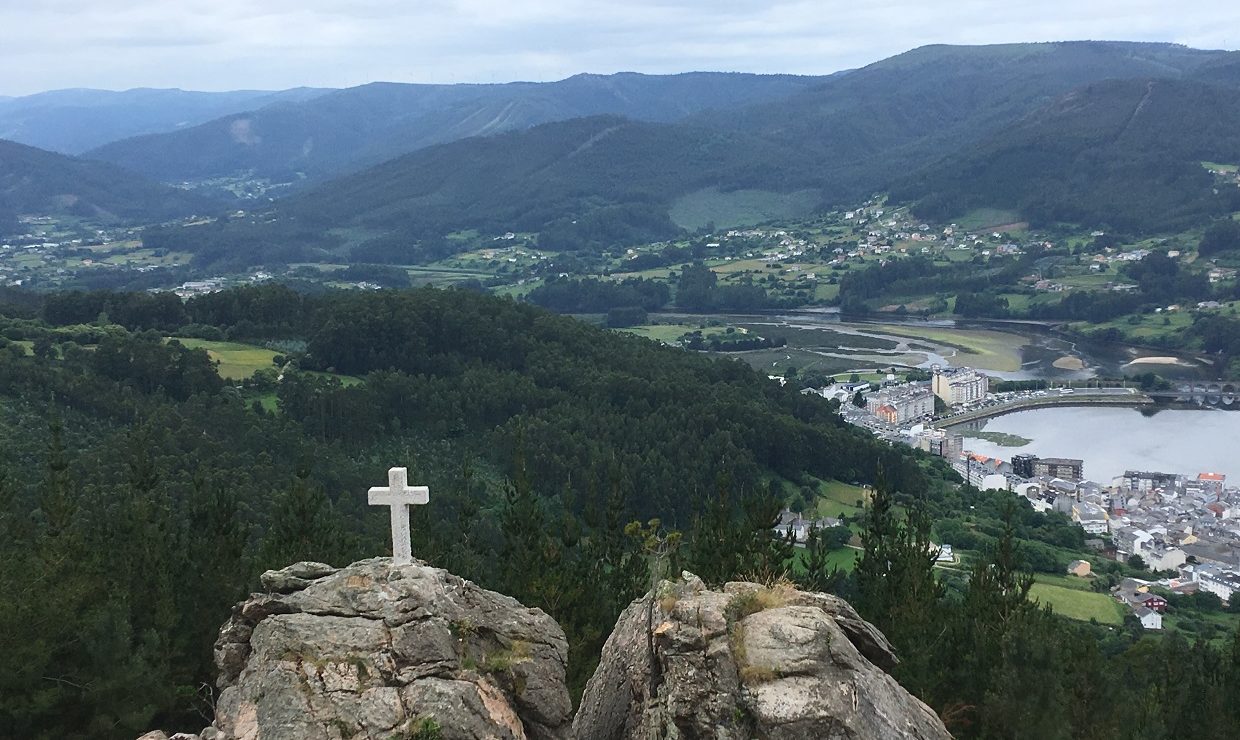 And here looking down to the beach where we anchored – and just over the pine trees sits the marina: We had a great 2 nights with Neal and Liezel. We taught and beat them at Wizard (good way to lick our wounds after the crowing of the self proclaimed “People’s Champion” in Ribadeo) and generally had a good time exploring the town and catching up.

After subjecting our guests to the tortuous uphill climb to San Roque, we then chose the gentler walk along the river. This starts just outside the centre (look for a tunnel under the railway bridge near the modern (not the old) road bridge)…….behind where this photo of the town was taken: We were blessed with a rare day of wall to wall sunshine and around 25c. The sweatshirt soon came off! 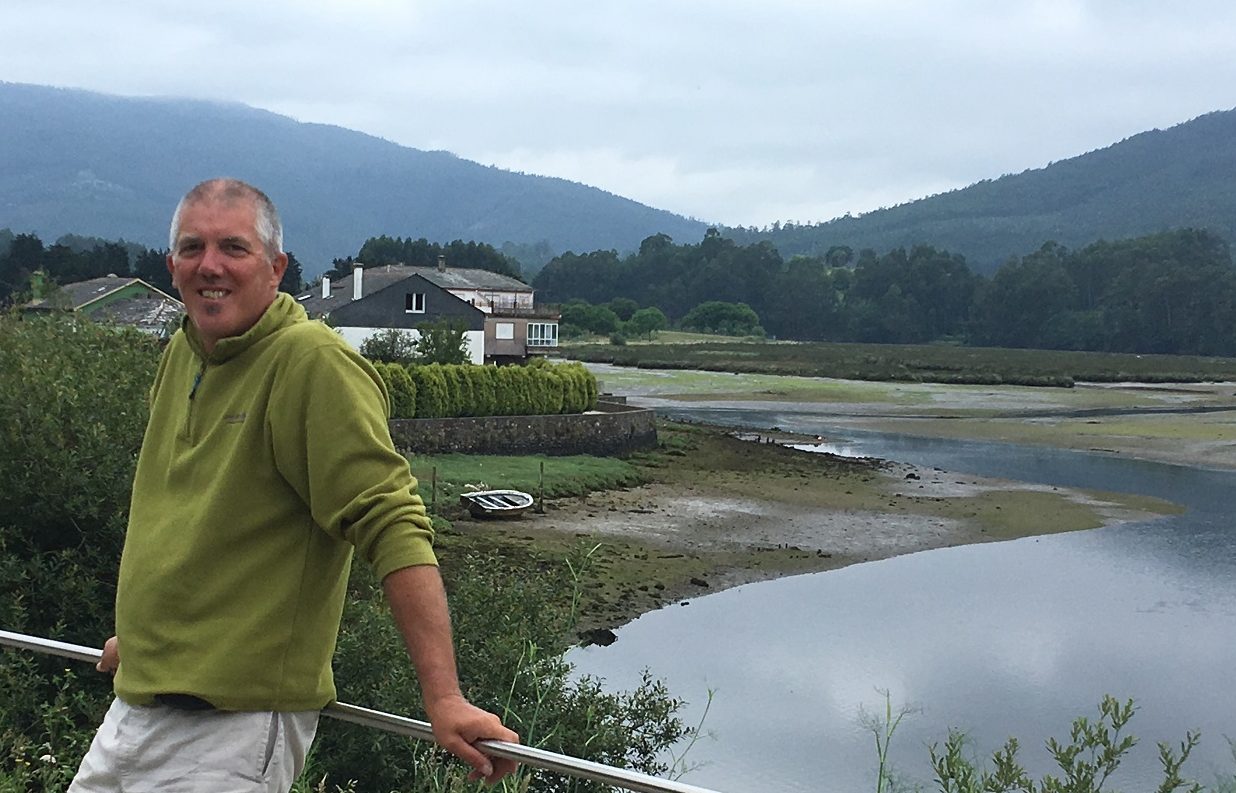 The river meanders along the stunningly beautiful valley…..

……which warrants more pictures than even the views from San Roque! We liked the town of Viveiro itself – with one long, narrow old shopping street: …and an old area around a monastery with some restored and some decaying buildings.. We also walked through the nearby fishing port of Celeiro (for the sailors, a sheltered anchorage is shown in some guides just off the two pontoons of small boats shown behind the statue here, and in the top photo):

Celeiro has a couple of bars and some very old buildings behind the port – it is interesting but other than the three stages erected for a major heavy metal fest later in July (80,000 visitors and some major names having played here) this is a sleepy little village (but worth the walk).

We walked up through Celeiro, along the road and down to Playa de Area, the beach which sits to the South of the island on the East side of the Ria, where we had seen boats anchored when we arrived, and where Adam and Lynne had anchored (with a tripping line in case of any remaining elements of the fish farm shown on charts but no longer there).

The beach was stunning, and we had a very nice Sunday lunch at the excellent Restaurante Louzao, just behind what appears to be a partly disused hotel on the beach.

Adam and Lynne plus their friends Theresa and David joined us in the marina for the final England qualifying game.

We then delayed our departure for one day beyond the intended week to watch our second England World Cup game in the town, going back to the same bar with Tim, Emmy and Tim’s parents, John and Julie, who arrived to spend time with Tim and Emmy that day. We had corresponded with Tim previously via a sailing forum and it was good to finally meet.

As I type this we are about to head back out to anchor of the beach, awaiting a really good weather window promised for the weekend to allow us to round Cabo Ortegal (North Wets tip of Spain and not somewhere to be in the wrong conditions as winds are funneled and accelerated here).

We will be at anchor and without wi-fi for a little while. Back as soon as we can,