Showing off some of our favourite haunts... 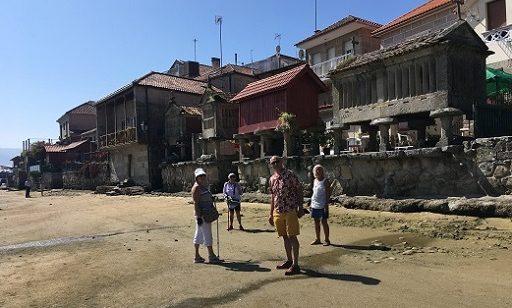 We had arrived in Combarro to welcome the first two sets of visitors.

First to arrive was Paul’s mum along with his sister and brother-in-law. Paul’s mum had spent a weekend with us in Scotland, but Jayne and Nick had never seen Calypso in the flesh.

They had stayed a few nights in A Coruna before moving down to Santiago de Compostela and came for lunch on their way.

We had a lovely lunch aboard before going for a wander around Combarro – a lovely old village but for the shops full of tourist tat referred to in an earlier log.

All three were loving their stay in Galicia, highlights for them being Coruna, Finisterra, Santiago and of course lunch in Combarro! They were here for just a week but I suspect they will be back!

After a few hours they left at 4.30pm and we had an hour to tidy the boat before the Cookies (Mark and Sue) arrived for a 5 night stay. They had visited last year here in Galicia and were more than happy to come and keep us company again!

Night 1 was spent in Combarro, visiting one of many restaurants. In spite of Paul’s protestations Val insisted on eating at THE most tourist trap looking restaurant; on the old quayside and complete with wood oven it looked the part – but as Paul predicted was……..disappointing.

On day 2 we had hoped to visit Illas Cies but the forecast was a bit too breezy and from the North, so our landlubber visitors might not be too happy anchored out there. So we headed towards the mouth of the Ria to try a new anchorage for us at Praia de Canelas, just West of Portonovo.

We motored from Combarro arriving just before lunch and anchored outside the swimming area buoys with a few other boats on clean sand. We had intended to stay here the night but an annoying little beam on swell was working its way in. And so we had lunch aboard and decided to head into the busy tourist resort of Sanxenxo instead, our trip totalling 11 nm. 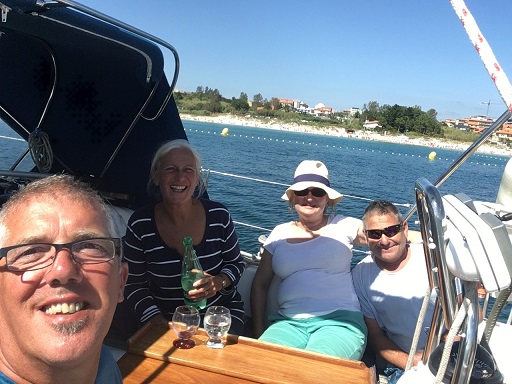 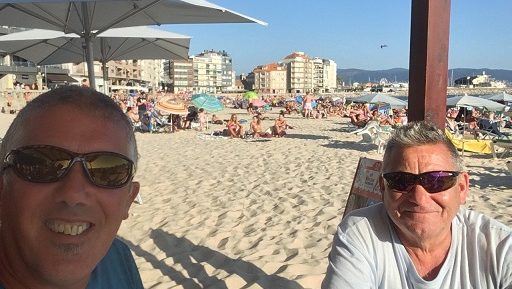 One thing we do love about this sailing ground is the sheer variety of places to visit in such a small area – from cities to working towns, busy resort towns like this and quiet anchorages. There’s nothing wrong with a beer in a beach bar ogling the local talent! And as much as we love anchoring for a few days off a quiet beach, there’s nothing wrong with having a hot shower in a posh marina….

There’s a big choice of restaurants here but all a bit touristy and busy for us. We didn’t really find one that took our fancy but ate out anyway on the patio of a hotel, which was…….OK.

On day 3 we headed South out of Ria de Pontevedra into Ria de Vigo. We had a great sail in good winds, but the winds were forecast to build through the day again and we decided to head for the marina in Moana. Sadly when we radioed in they were full, so we opted to go to a new marina for us.

Punta Lagoa sits in the Eastern suburbs of Vigo. We had read that this is not a bad place to keep the boat in winter but there is little of merit around the marina.

We radioed in and were met by a marinero on the visitor pontoon – and by now the wind was blowing an absolute hoolie!! We were happy that the marinero was on hand as the howling gale was trying to blow us off the pontoon, so with Mark throwing a line and Val stepping off as we approached the pontoon at speed we tied up without drama after 20 nm..

However then we had to move to the inner pontoons. Paul and the marinero went to inspect the 2 available visitor berths, so that in the high wind we could prepare a plan before casting off. And having done so we tied up without too much difficulty in a berth right next to and in the shelter of the concrete quay.

We went for a nice walk, the only one there is here probably – up the hill to the small hermitage on top of Mount A Guia. Apparently fishermen’s wives used to light fires here to guide their men back home!

The views were certainly spectacular, over Marina Punta Lagoa and the nearby commercial dock and out towards Illas Cies. 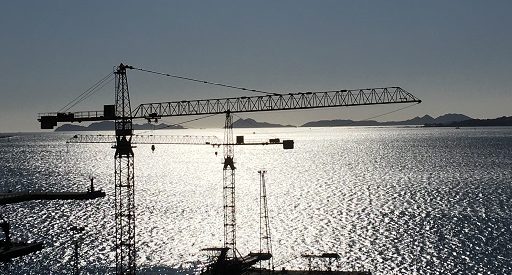 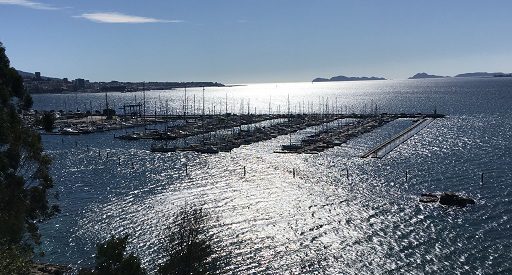 We didn’t find any restaurants within walking distance of the marina and so ate on board – pasta puttanesca from the emergency rations.

On day 4 we had a gentle sail under genoa only, 2 nm across the ria to Moana.

Paul’s back was playing him up and so Val, Mark and Sue went on the watermill walk that we had done with Lynne before (in this earlier log). Afterwards Paul met them at the beach and we all had a swim in the bracing but tolerable water off the shallow beach.

After showers it was time to pick a restaurant. We had enjoyed the G&T’s in the marina bar the last time we were here and decided to eat – arriving early by Spanish standards we had a good meal and would certainly recommend the place.

On day 5 we took a bus (via Cangas) to the very attractive old city centre at Pontevedra, eating at the Ritz restaurant where we had enjoyed an excellent meal on our last visit. 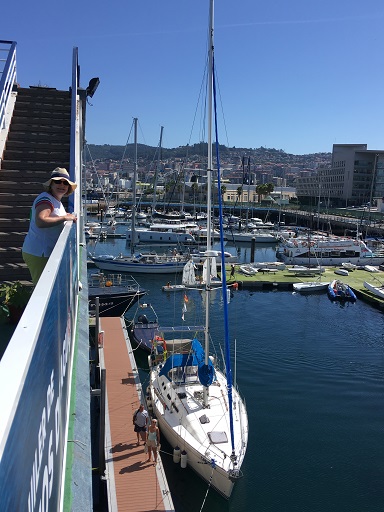 On day 6 we motored 2.4 nm across to Vigo. Paul had spoken to the marina master David Silva to book a berth at Real Club Nautico de Vigo. They don’t normally take bookings but as we were dropping off and collecting visitors David assured us that a space would be available. And when we arrived we discovered that the marina was full!

However true to his word David tucked us around the rear in an area reserved for police/coastguard boats and the sailing school. It was very nicely protected from the slight surge that can enter the west basin of the marina at times.

Paul was still resting his bad back and so Val took the Cookies up to the top of the hill overlooking the city and across the Ria towards Bouzas and beyond to Islas Cies.

We had a long and late evening in this vibrant city, with G&T’s on a hotel roof terrace and a few more in the marina bar after a meal out.

The following day, before Mark and Sue caught their train to Santiago de Compostela, we had a taste of the excellent art on offer in Vigo – Mark and Val being former art teachers and colleagues. We visited the excellent art gallery. An amazing space with some excellent works.

One of the best pieces of art in the city is the huge, iconic sculpture at the heart of the centre, towering high above the street. ” O Sireno” (The Siren, half man half fish) by Galician sculptor Francisco Leiro. It is one of many public realm sculptures in the city, including that of Jules Verne, pictured at the head of this post by the marina (with Calypso pictured  behind). We also visited a rather posh art gallery where we could have bought a domestic scale limited edition copy of O Sireno for 35,00 euro but after deliberation decided we didn’t have the right space to display it! 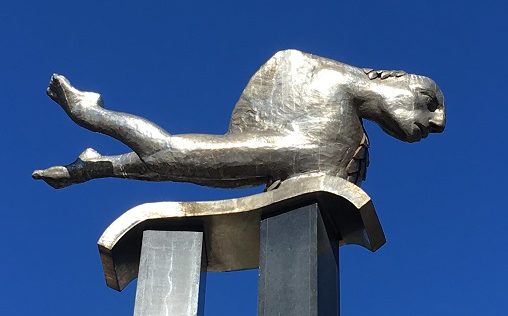 We had a lovely time Mark and Sue, thanks for visiting!