Before leaving Plymouth we went to the Moody Owners’ Association South West Branch end of muster dinner, thanks to the knock on the door from Kevin and Mary, (who saw our MOA burgee) and to organiser Peter for squeezing us in last minute.

We went on the coach to the Copthorne Hotel and had a very sociable evening with great company on our table. Thanks all.

A few days after returning from our wedding in Yorkshire we spoke to Plymouth Yacht Haven marina, where we had earlier booked in to stay “just a few days over a month”. They advised that as we had gone over our month then we had gone back up to the full daily rate – £38.96 from the £21.39 per day we had been paying. Our protests fell on deaf ears, but we had already overstayed the month by a few days when we discovered this. Fortunately there was a “stay 5 nights get 2 free” deal on, so we took advantage of that.

We were intending to stay one more night after the 2 free nights ended, but rather than hand over our hard earned cash to the Plymouth Yacht Haven bandits we uprooted Calypso and moved over to Sutton Harbour Marina. Lesson learned? Always check if a long stay reduced rate will be applied pro-rata for any run-on days. This had been the case previously  (eg Rothesay, Bangor and Dun Laoghaire) without our asking and we had wrongly assumed this to be the norm..

We had previously discounted Sutton Harbour for our one month stay due to our perception that it would be noisy, with the prospect of being overlooked by the hoards (and at times drunken hoards) on the Barbican quayside.

At the Moody bash, Sutton berth-holders Graham and Pauline told us that the far side of the marina is tucked away from all of that, and when we arrived we discovered that the marina’s policy is to put visitors in the quieter area – and we really enjoyed our one night stay there. We may stay a week here next year, and will certainly steer clear of the Yacht Haven. The facilities here were also excellent – newly refurbished large wet rooms with great showers. Nightly rate £42.89 but no water taxi costs. 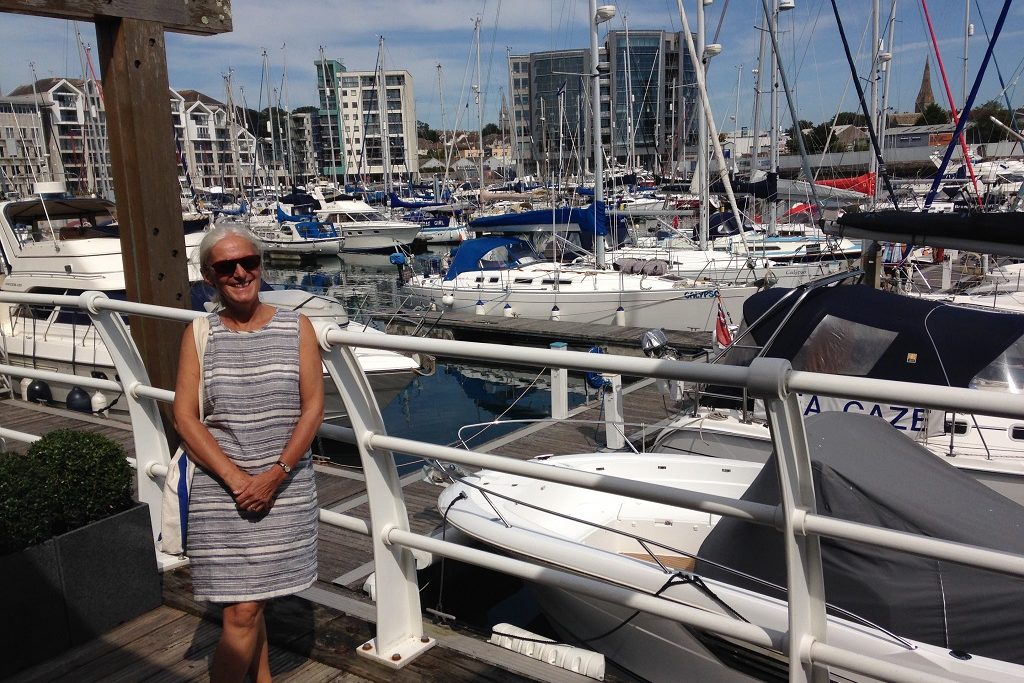 We could walk around the Barbican area and into the city centre without the £6 (for 2) return ferry crossing, and as darkness fell and we walked around to the fishing fleet end of the harbour the area took on a great atmosphere, with eateries and bars of all kinds around the quaysides. 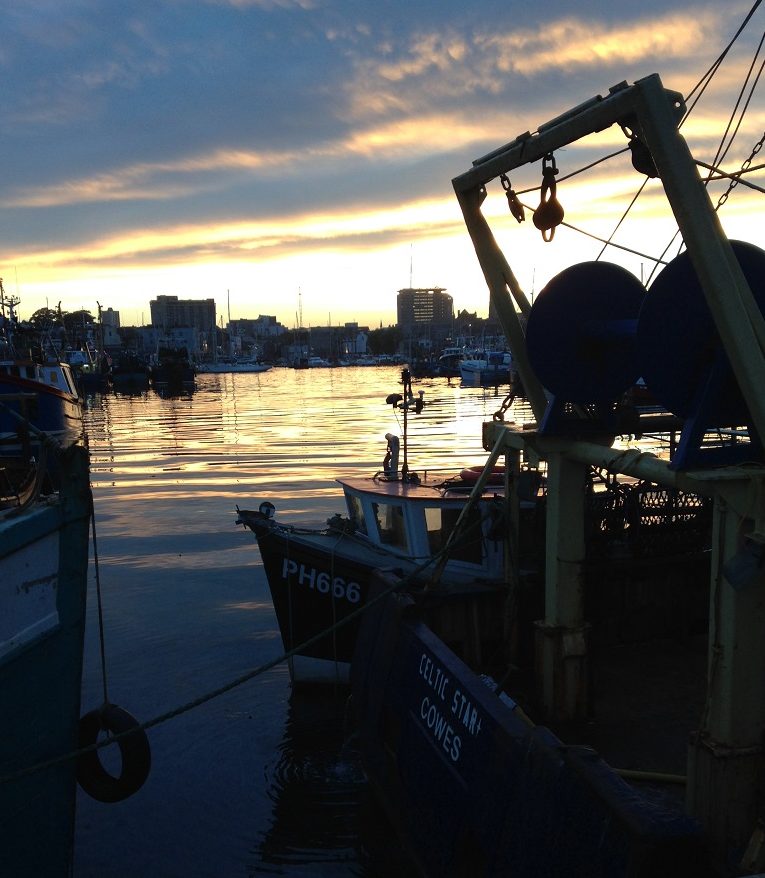 The following morning we called up the lock-keeper at 07.30 on VHF and locked out of the harbour. The lock is manned 24 hours a day and is wide. Getting in and out is easy enough.

The trip was some 21nm, and we set off early to catch the helpful tide along the coast and to ensure that we arrived at Salcombe approaching high water as there is a sand bar at the entrance to the river. There are leading line daymarks to guide us over the deeper section of the bar, but that route still has a least depth of 1.9m at certain states of tide at low water and so we wanted plenty of rise of tide to make things less nervy! 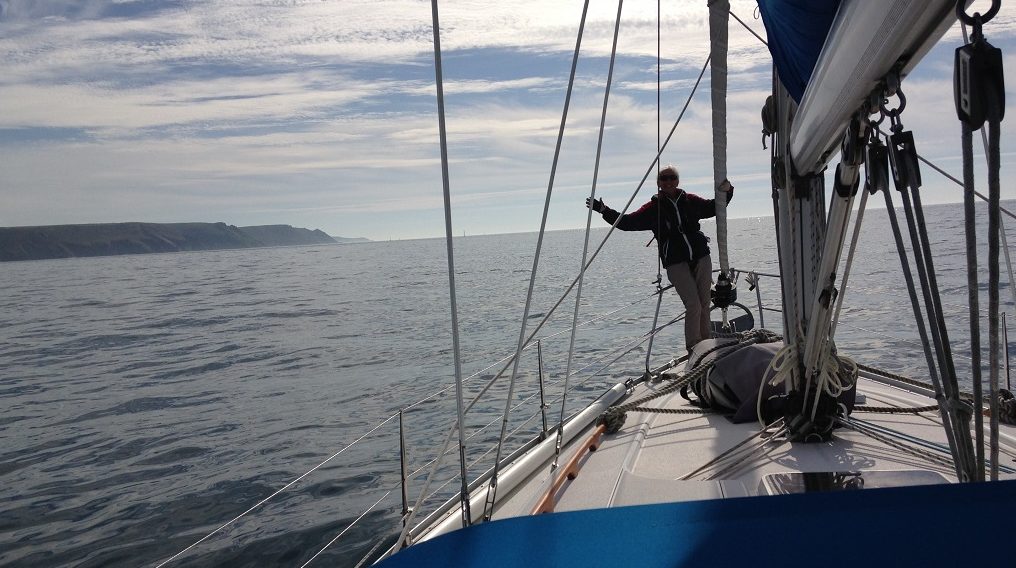 We motored for perhaps 60% of the way before the wind appeared, after which we had an easy sail with wind slightly aft of the beam for the final part of the trip. We took down the sails before entering the river as we are unfamiliar with the entrance with its bar and rocks, but all was fairly straight forward – we picked up the leading line and the good buoyage guided us around rocks to starboard very clearly.

We called up the harbourmaster on VHF and were directed to a visitor swinging mooring. The Salcombe Harbour website has a very helpful chart showing the locations of the various visitor moorings. We had that oniPhone and so when instructed to go to “victor one” we knew where it was.

The mooring was picked up easily first time under the expert helming of Mrs L. – who has a 100% record for first time mooring pick-ups on this trip – ably assisted by the fore-deck crew!

Shortly after we had settled in we were waved at by Rosie and Adam who wanted to raft alongside us. This was another first for us – we had never shared a mooring ball with another boat before, but this is common practice in the Salcombe honeypot, where 3 to a ball is common in the height of season – and with the forthcoming bank holiday weekend this was certainly peak peak!

Having tied Rosie and Adam alongside we put the outboard on the dinghy using the newly acquired engine hoist (seen here:)……….

……… and went ashore to explore. Salcombe was, to put it mildly, busy! We had a bit of an explore but quickly took sanctuary from the madding crowds at the Salcombe Yacht Club – a very friendly place where we looked down over Calypso over a beer (shown here, rafted on the far side of the 2 yachts shown in the centre): 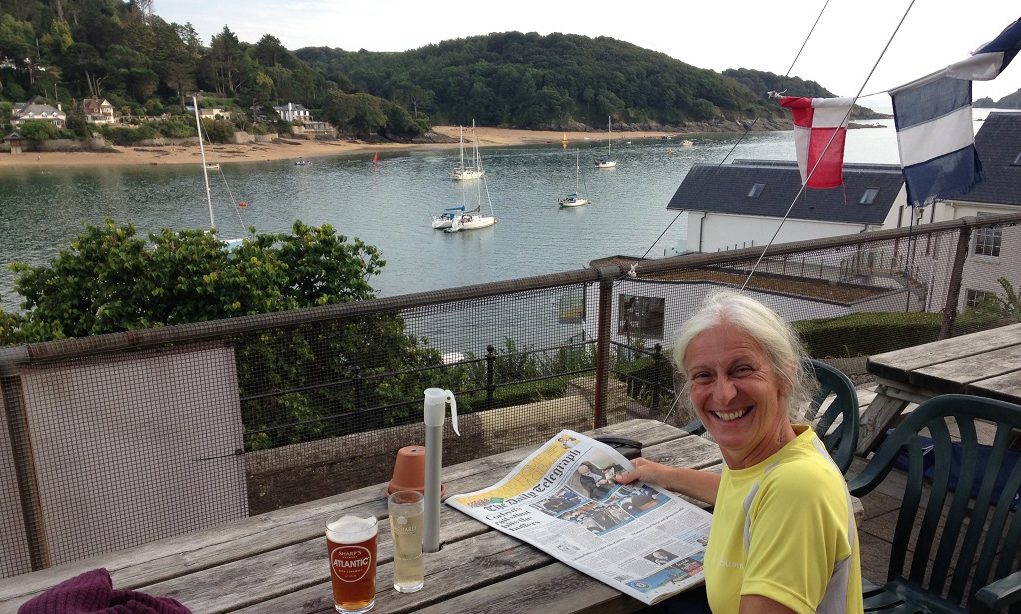 We had taken our shower bags as the Yacht Club welcomes visiting yachtsmen and allows them use of the showers (£1 coin required). We enjoyed the place and booked to eat on Saturday night, which turned out to be a good choice – both in terms of good food and good company. Indeed in the week we spent at Salcombe we returned to the Yacht Club several times (more for showers than beer!)

We booked a full week on the mooring ball as we arrived in order to take advantage of the “buy 5 get 2 free” deal, the cost for the week being £111. And as it turned out we were glad that we did, and could fully appreciate why Peter and Diane would return year after year.

That said, the place was mobbed that week by a certain clientele – the car parks had an unusually high proportion of German cars, with plenty of Range Rovers and Jags.. The dinghy docks were parade grounds for the kids of the wealthy, showing off in expensive ribs (some with annoying sound systems – that somehow just weren’t annoying here!) They were kitted out in designer shorts etc and clearly very well groomed. The last time we experienced such a spectacle was when we were moored off Mustique and witnessed well groomed kids of the mega-wealthy arriving at Basil’s Bar in golf carts – here the golf cart was exchanged for a rib!

The whole place is littered with dinghies and outboards – this photo shows a very small proportion (the island pontoon off the main walk ashore pontoon must house 50 – and they are just everywhere): 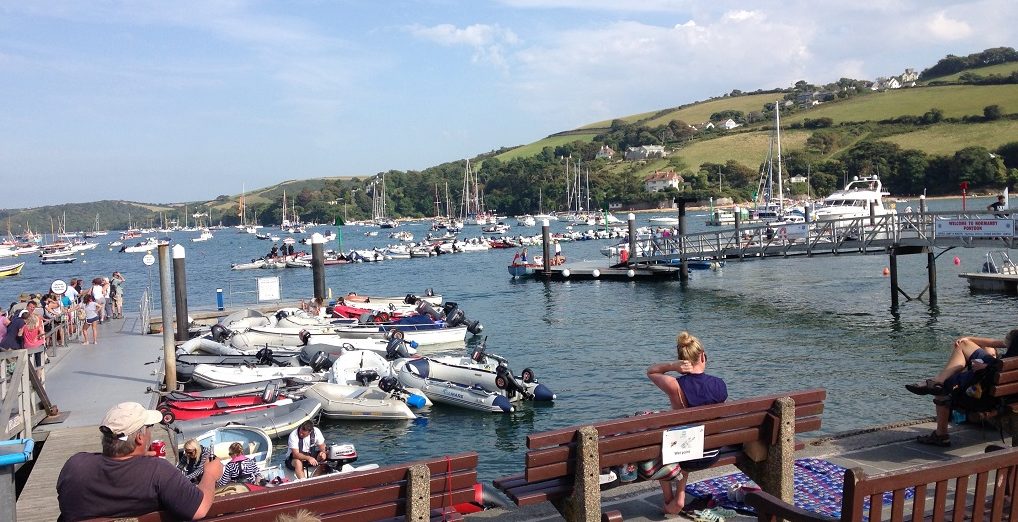 We walked around the expensive shops to find that all had sales running – prices reduced from laughable to expensive, but there are plenty of takers here. We did find our bargain though, with Val chatting to a local schoolboy carrying a large fish (pollack?) “Where did you catch that” ended up with our purchasing it for £4.08 (he didn’t have change for a “score”!) No doubt that will be used as beer tokens in the Fortescue later.

Early in the week we filled the dinghy with petrol and went up-river to South Pool. Even with a dinghy this village is only accessible by water about an hour and a half either side of high water, and pushing that a little we did have to pick our route through the shallows carefully. The dinghy pontoon is just a little short of the village, seen here in the background: 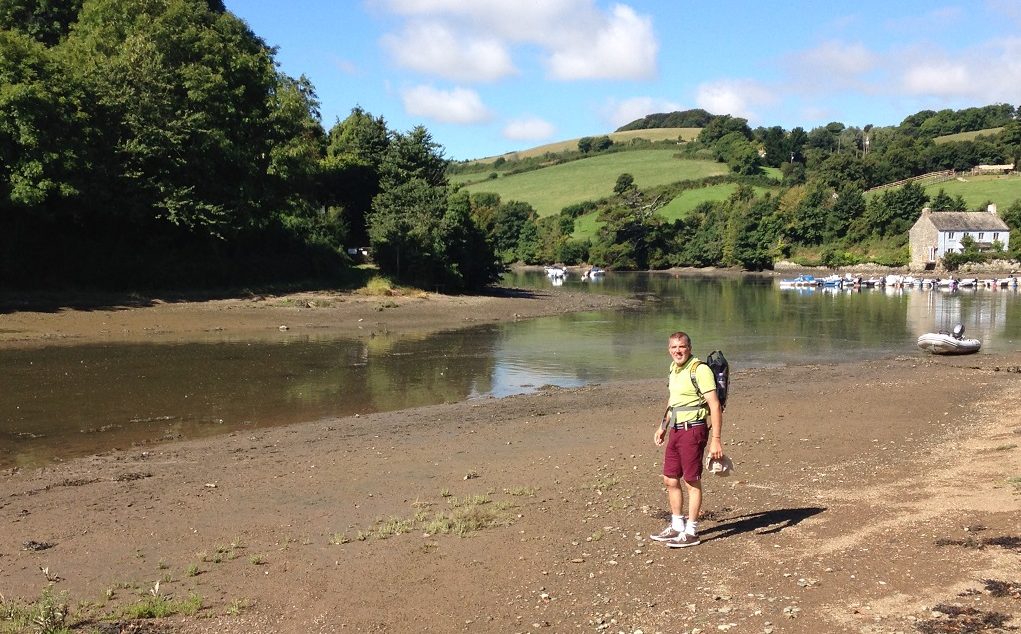 Going early, however, allowed us to book a table at the quaint and highly rated Millbrook Inn (with Frenchies in the kitchen) and to walk around the pretty village with its historic church: 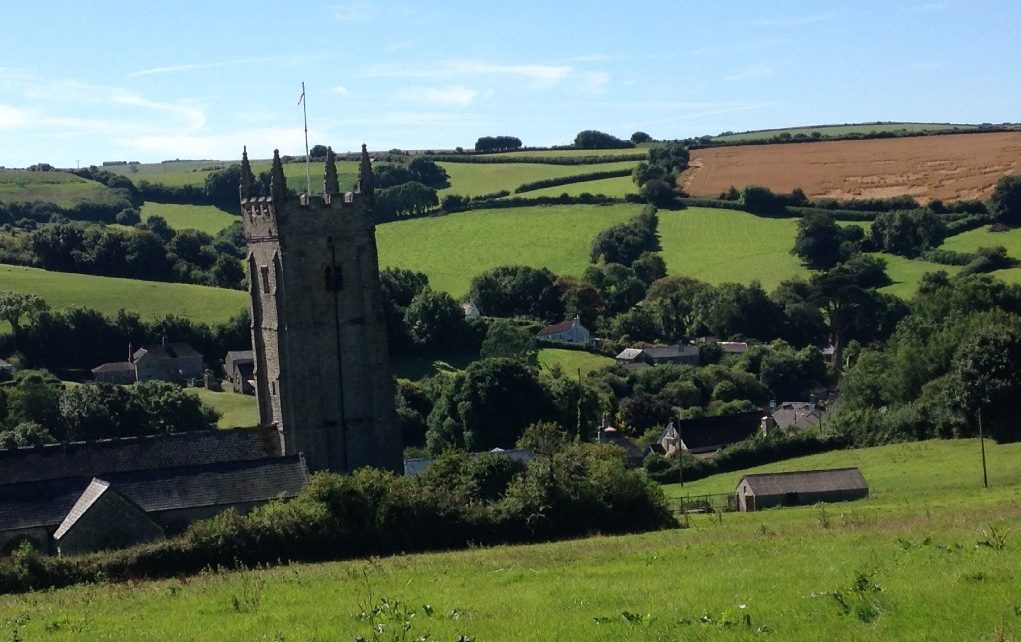 Having walked up a thirst we had a beer in the back garden before eating a superb lunch, pleased we had followed the recommendation of Rosie and Adam: 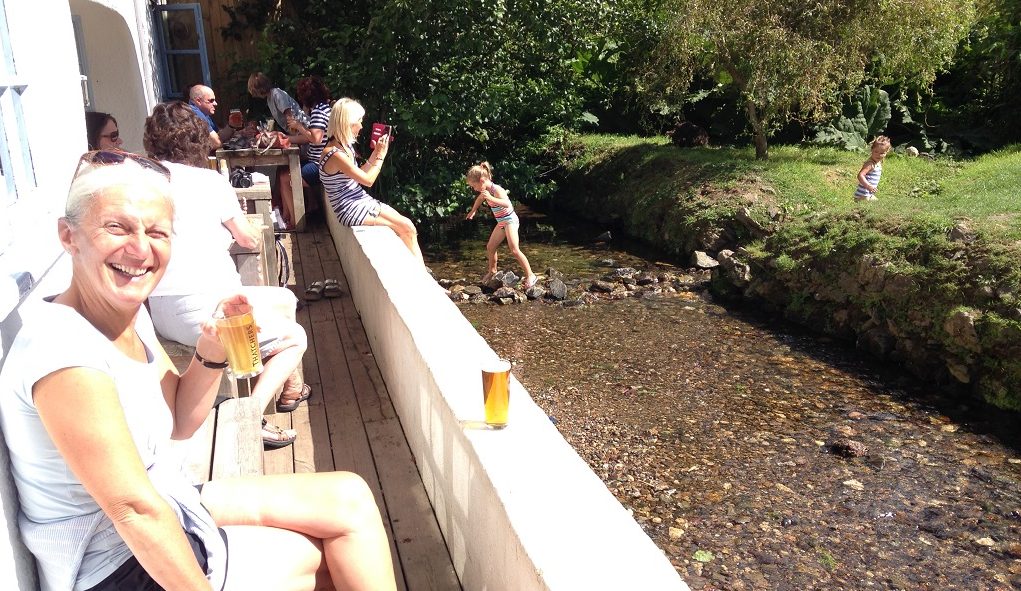 During our trip up river we noticed that the area was teaming with fish – sea bass in particular, and so Paul had to return. A spell of trolling a lure behind the dinghy yielded 2 mackerel and a sea bass – this being the prize catch, but unfortunately not over the legal limit and so no fish were harmed in this particular caper! 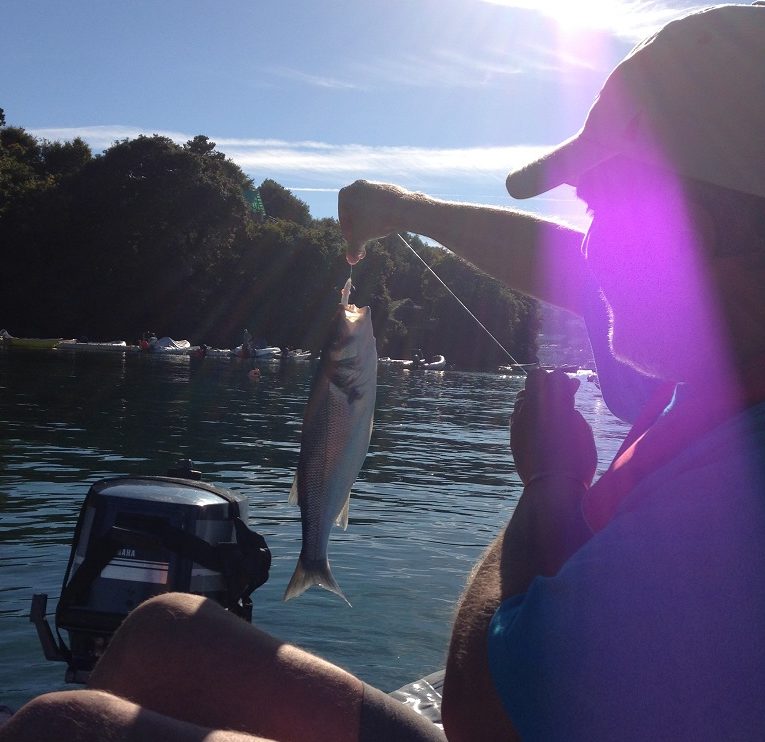 A couple of other days were spent walking – first from the town centre and to the North, with good views back over the town: 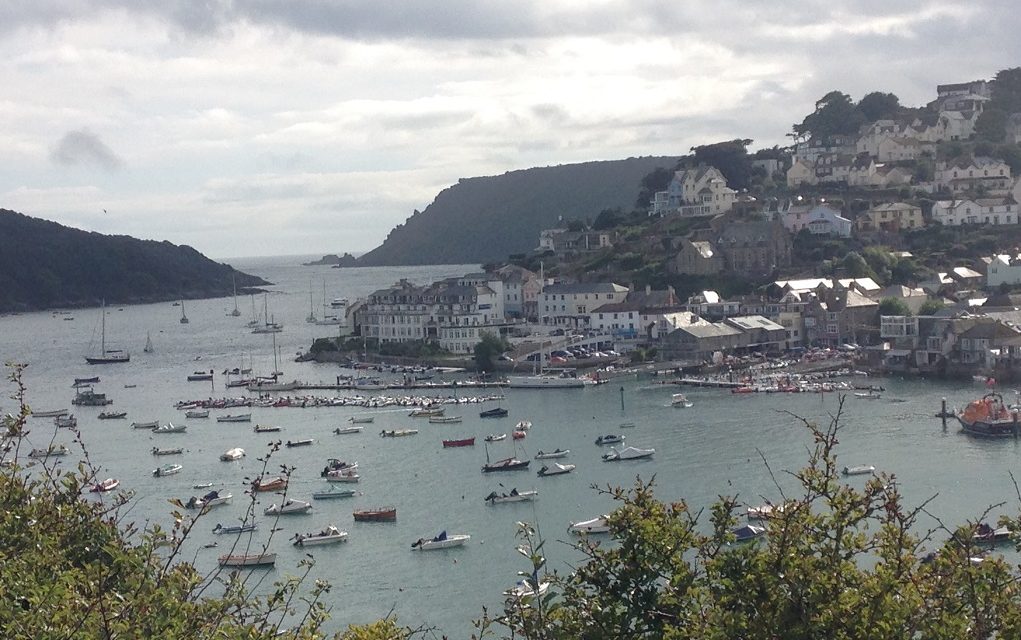 On the second occasion we took the dinghy down-river and landed at the North Beach to have a rather splendid fruits de mer at the Winking Prawn (no sniggering at the back!): 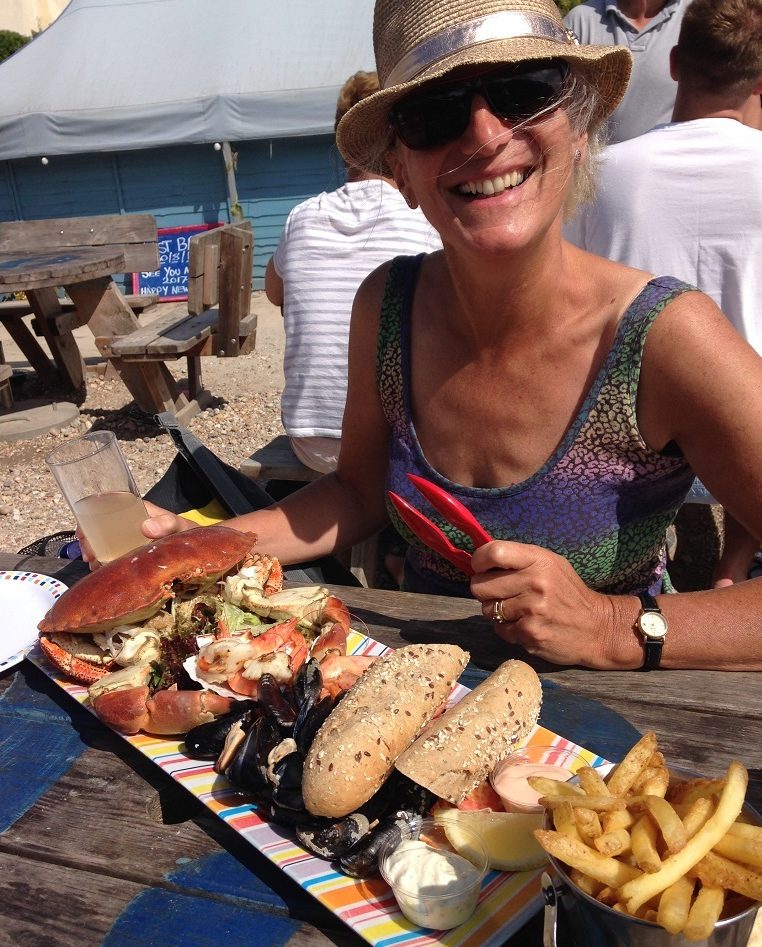 ….before taking the dinghy around to the South Beach, and after tying up in front of the hotel enjoyed our most spectacular walk yet, around the cliffs to the South West of the river entrance: 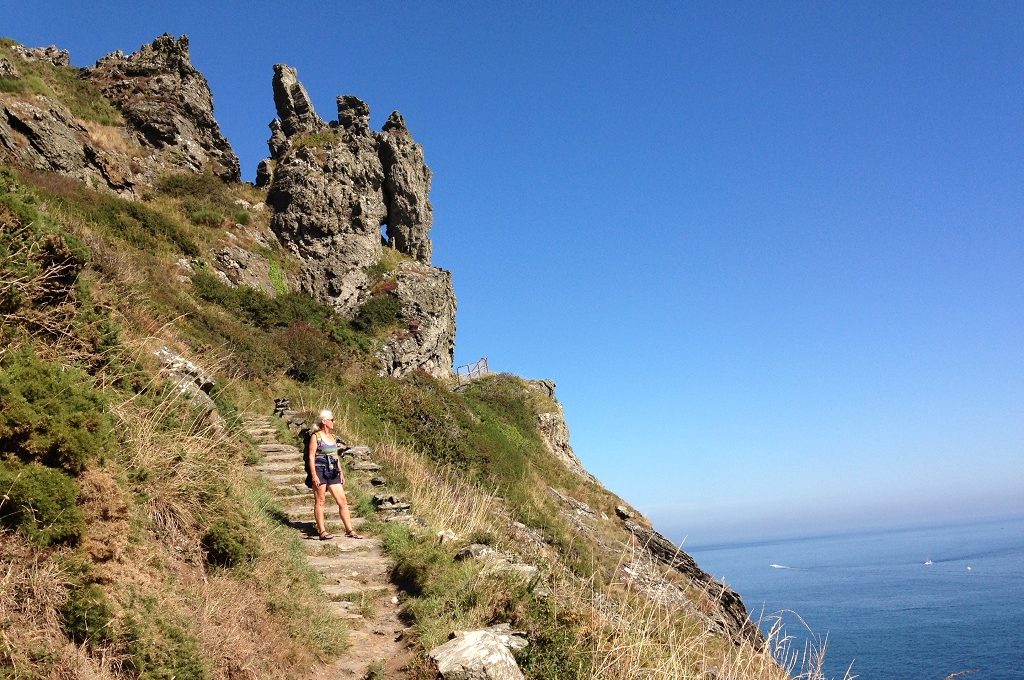 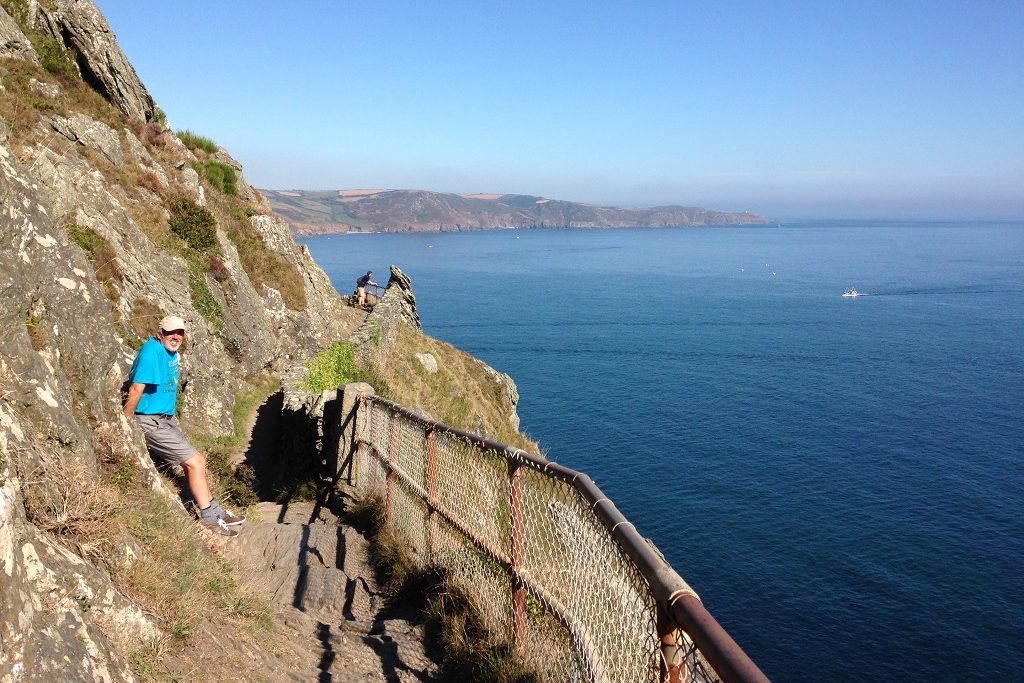 The week was drawing to a close, but we couldn’t leave without an afternoon on one of the lovely beaches. One of us thoroughly enjoyed the sun: 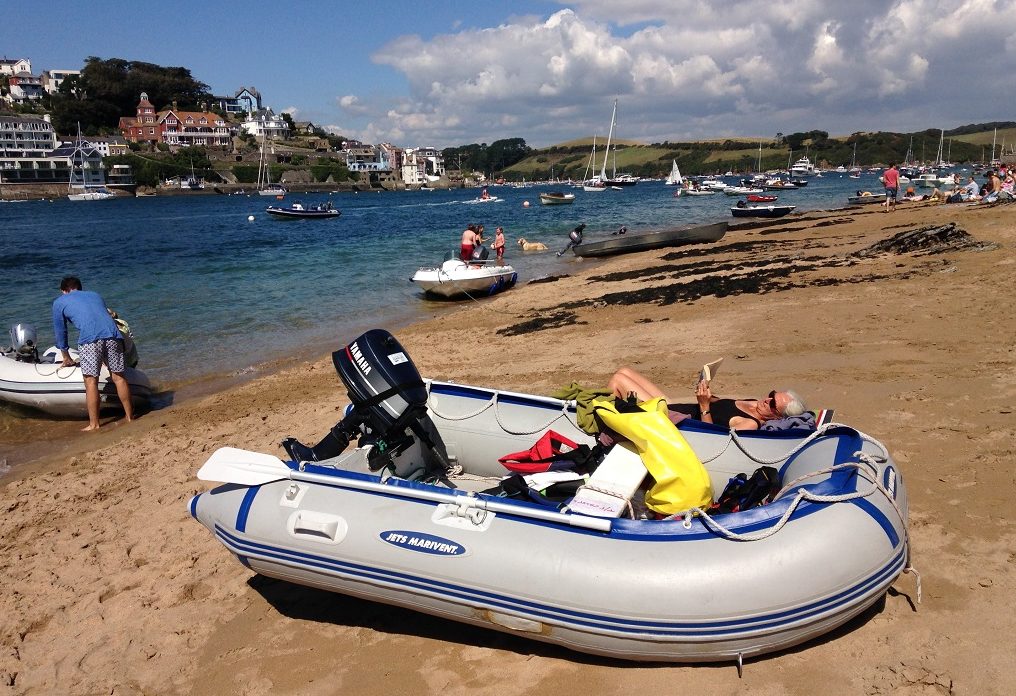 …..and one of us braving the chilly water for the first swim in the sea of this trip (I did try to photoshop out the wetsuit but failed!).. 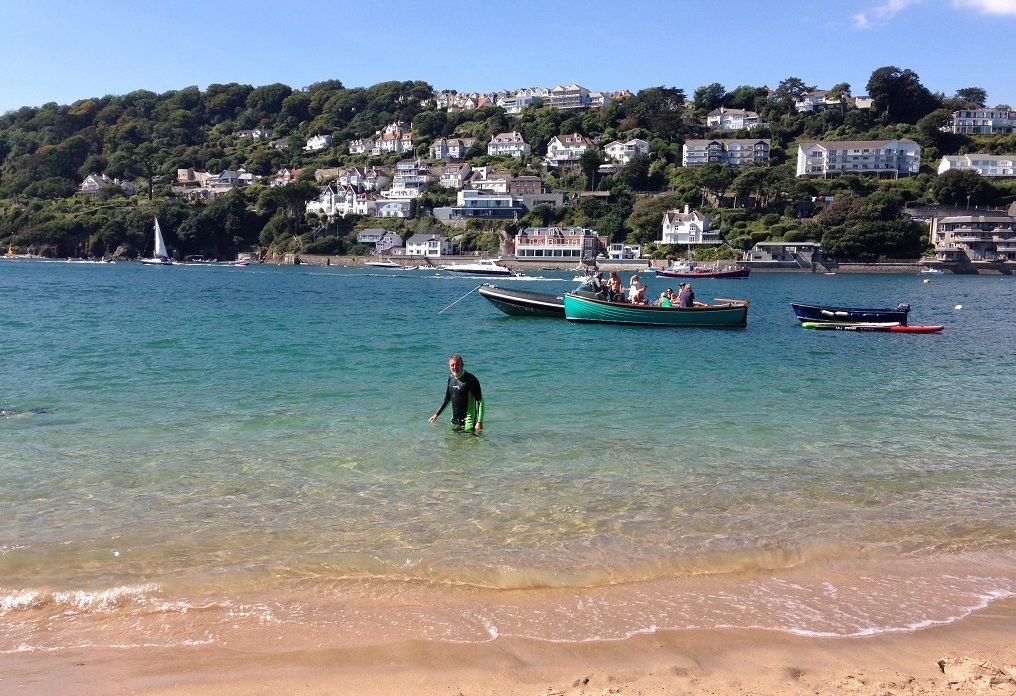 And so the week came to an end. Thanks for the recommendation Peter and Diane – Salcombe does indeed rock!