We had visited Muros and Portosin marinas last year as well as the San Francisco and Muros anchorages but felt there was more exploring to be done here.

We wanted to visit Noia as well as spend a little more time in the delightfully unspoiled fishing village of Muros. 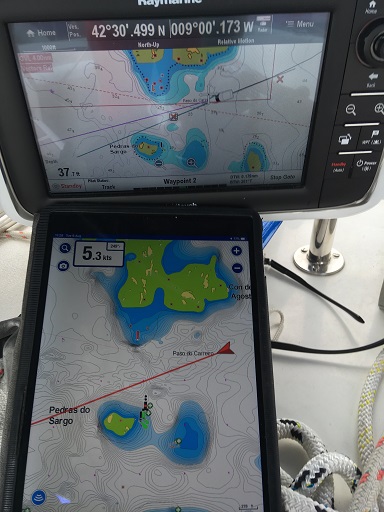 Last year when traveling from Ria Muros y Noia to Ria de Arousa we took the long way, passing to the South of Ila de Salvora rather than cutting through the rock strewn area with narrow passages between the island and the North coast of Ria Arousa.

This year we were a little braver and plotted a route to pass through the Paso do Carreiro, a safe passage; only around 370m wide, but clearly buoyed.

The photograph shows the chartplotter and iPad next to each other as we passed through the channel – both running Navionics charts but showing very slightly different detailing.

In this second photograph of chartplotter alone, to the North can be seen the Canal das Sagres. This is only around 225m wide and unbuoyed. One pilot says that it is “suited to devoted rockhoppers”! We are led to believe that all of the dangerous rocks are visible….except one – but it only takes one………… and we are not devoted rockhoppers!

Passing through Paso de Carreiro saved us almost 4 miles compared to last year’s rounding to the South of Illa de Salvora. Going through Sagres would have saved one more mile – about 12 minutes or so. We were happy to take a little extra time.

Last year we entered Ria Arousa in 20 knot winds. This year we headed through Paso do Carreiro with not enough wind to sail. There was a good deal more swell last year and it must have been the sight of waves crashing on rocks that made us go the long way around!

Today we motored the entire 27 nm, taking 5 hours and 15 minutes from engine on to tied up and turned off. We dragged a fishing lure the entire way, but still no luck. Maybe we need to reduce the size of the lure and accept fresh mackerel! 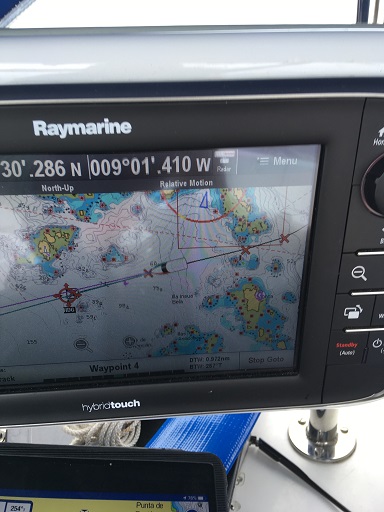 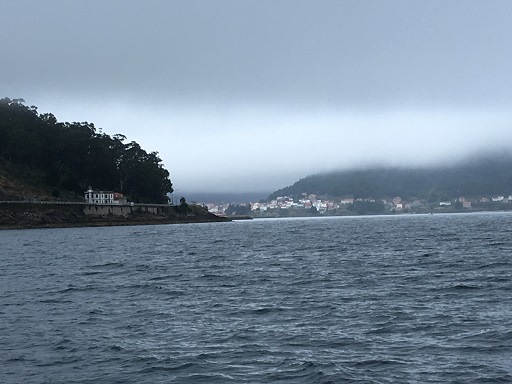 The weather was turning on the day we headed to Muros. It was dry but the clouds were low as we arrived, but the forecast for the next two days was for strong winds and much rain.

Having radioed in (very important here if not to risk the wrath of Pedro) Pedro greeted us initially with “did you have to come here? There are plenty of other marinas to choose from”!

And with that out of his system he greeted us like old friends.

When we stayed here last year the cost was very reasonable, but that was September. Now in August the nightly rate was 35 euro. We are offered a 15% discount as members of the Cruising Association, but because we stayed here for 5 nights we were given a 20% discount.

In a break from the rain we wandered across to the fish market and witnessed the catch of the day being auctioned off.

Nearby are 3 stalls selling very fresh fish which must have been bought here.

Mostly though our first couple of days were spent reading books in the day and socialising with the crew of Shiraz in the evening. 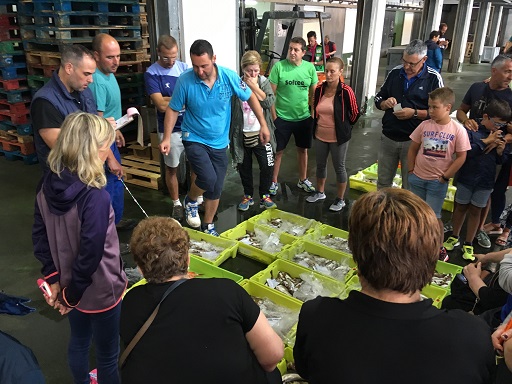 After the clouds parted we explored Muros again. It is known for covered walkways in the main commercial areas like this one.

We really like this place, both town and marina, although the shower block would benefit from updating!

Last year we took a walk in the hills immediately behind Muros. This year we wanted to walk out to the lagoon near the village of Louro to the West.

We could have walked along the seafront road but instead walked up through the town (on the road near the marina office) and passed the church, taking the higher road and finding this old wash house as we climbed. 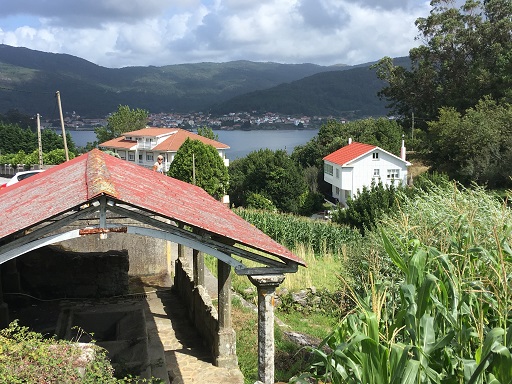 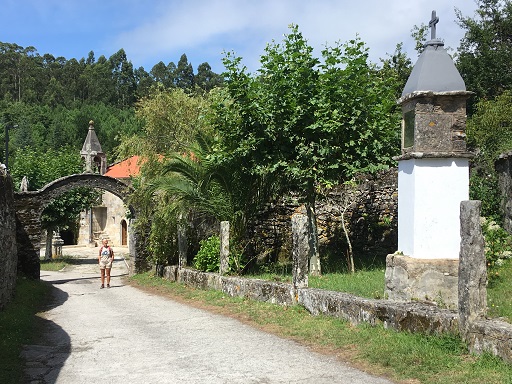 Last year we anchored off the San Francisco beach on the way to Muros but didn’t go ashore.

Today we walked through the village and found the monastery of Franciscan monks.

On the right of the photograph is a way marker for the start of a walk up into the adjacent steep hill. It is one of 14 such markers on “The Way of the Cross of Louro” leading up to a “cruceiro” (stone cross), each representing a station of the cross.

Apparently the monks would process up the Way every Easter and other major Christian festivals, but sadly that is no longer the case, given the ageing population of the monastery

We passed through Louro and tried to navigate our way to the dunes on the outside of a large lagoon.

We walked through scrubland but never quite found a way down to the beach, however enjoyed the views from the base of Monte Louro, a very large promontory at the entrance to the Ria.

We had our picnic on rocks overlooking the lagoon and then found an old track running back to the road on the other side of the promontory. 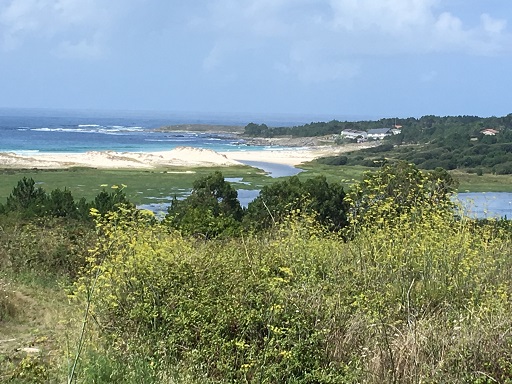 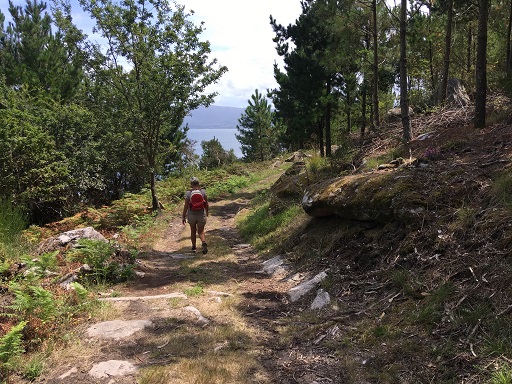 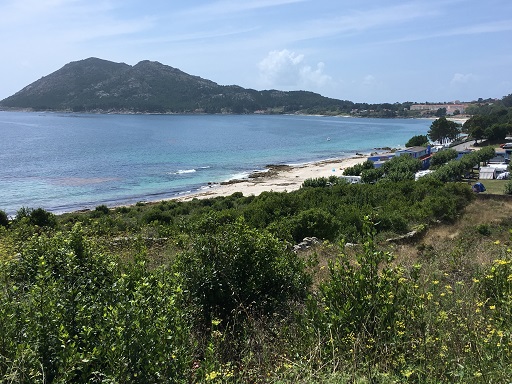 We walked back along the coast road, which had a decent path running alongside (could be used for cycling for those not wanting to walk that far).

The Monte Louro promontory can be seen beyond and the lagoon is to the right of that.

It had been a long walk on a hot day and we were glad to get back to the marina.

During the 2 days of high wind and heavy rain the marina had filled up, with some yachts arriving in the worst of the weather sporting full foul weather gear.

Today the marina had emptied, with several yachts now choosing to anchor just outside as seen in this photograph. 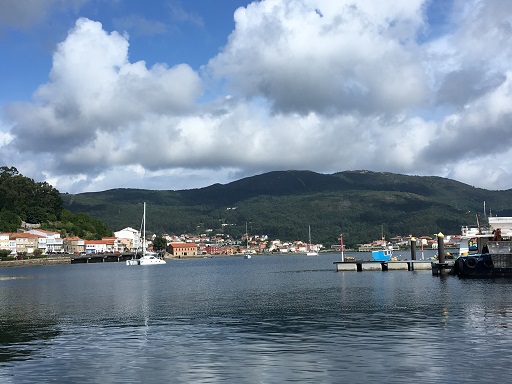 On Sunday we said farewell to Shiraz and hopped the 5 nm to Portosin marina. We actually sailed most of the way, although getting lazy in our old age we settled for a genoa only sail rather than raising the main! 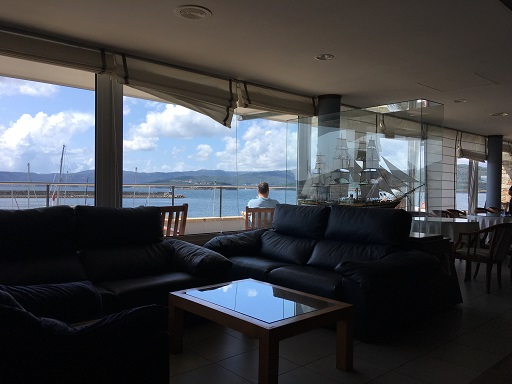 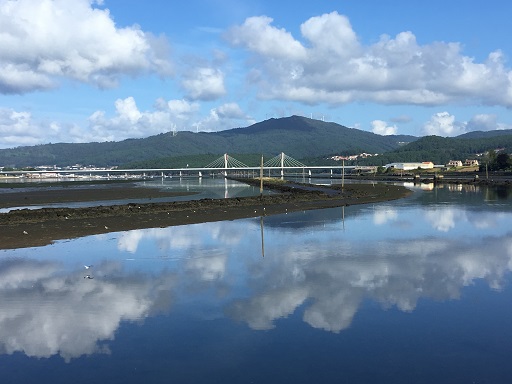 Lovely as the Portosin yacht club is there is not a great deal of interest in the village.

The main reason we had come to Portosin was to visit Noia by bus (the bus stop is right outside the Abanca bank – there is no sign, but that’s where people were waiting and the bus stopped).

Noia sits at the head of the ria at the confluence of 2 rivers, each bringing silt from the hills and so there is insufficient depth to sail here.

We had read that the old town was very interesting. Unfortunately we did not have enough time to visit last year as our appointment with the boat yard was approaching!

Noia was “quite nice”, but it has to be said that we were expecting more than “quite nice” and found it a little disappointing. Maybe that is a little unfair on the place.

We did find a very old church in the middle of a huge graveyard which now operates as a tombstone museum. That was interesting. And we walked upriver to find an old mill. That was okay. But we didn’t take a single photograph in the old town, which was – “quite nice”.

We returned to Portosin and enjoyed a drink on the terrace, watching the sun setting whilst drinking our favourite Albarino yet! 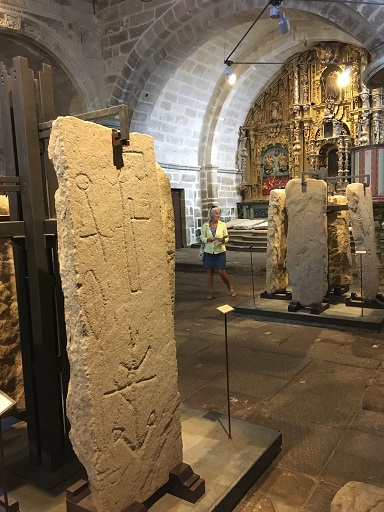 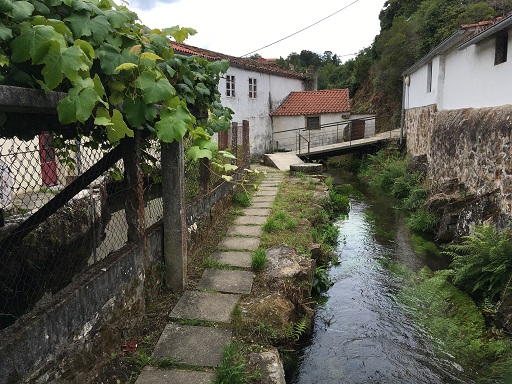 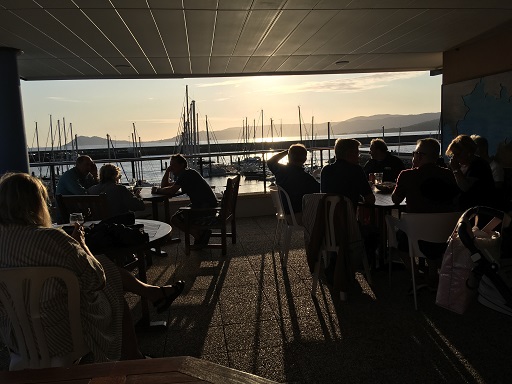 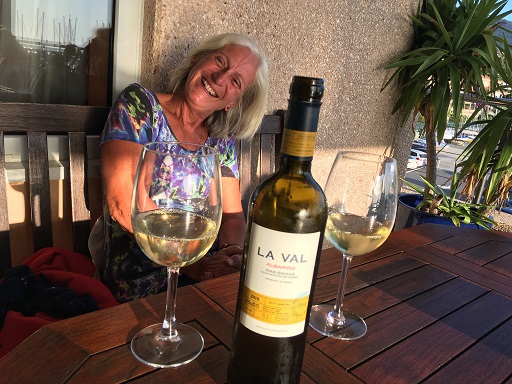 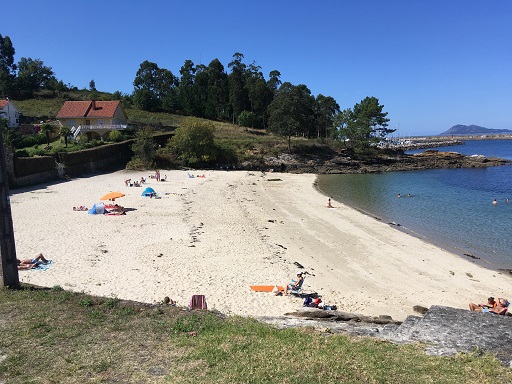 The facilities at Portosin marina are very good, and whilst mooring costs would be quite high here, with a 25% discount for Cruising Association membership we paid 54.75 euro for 2 nights, and received a nice bottle of Albarino as a gift.

Next to the marina is a pretty little beach, not as busy as some, and on our last day, delaying our departure, we went here for a swim followed by a hot shower (the marina can be seen sticking out from behind the trees in this photograph.)

We could draw out our last day in the marina as our next destination, the anchorage at Esteiro, was just 2 nm across the ria – seen here behind Illa Quiebra Arousa from above the beach in the previous photo.

We are definitely becoming lazy sailors. We could have sailed across, even under genoa alone, but it just didn’t seem worthwhile!

We did, as suggested in a pilot book, enter the bay straight through the mussel bateas to avoid the shallows to either side. 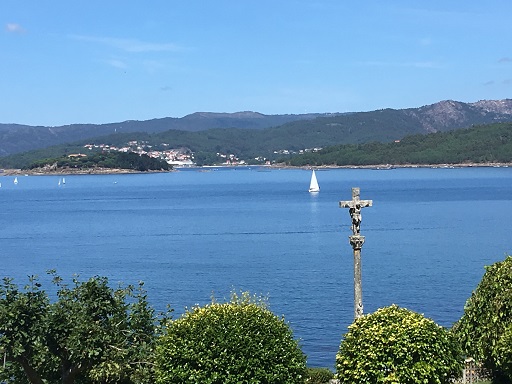 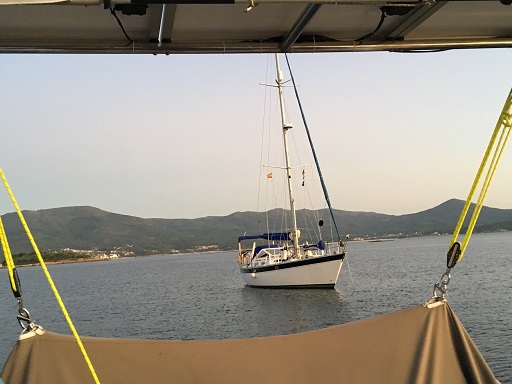 Shortly after we had anchored Seascape joined us. Ian was nearby and had accepted our invitation for dinner – a meat fest of a tagine, which we had cooked before leaving Portosin to make the most of the shore power connection!

The flavours had melded nicely by the time we ate it and we had a very enjoyable evening together.

Ian really does exist, but yet again we forgot to get his photo for the blog!

We stayed just one night in the anchorage before leaving for Finisterra, our next eagerly awaited destination.

We would have liked to have gone ashore here, it looked good, but the winds over the next few days dictated that we should leave, with very light winds the next day that would ease motoring to Finisterra, rather than fighting against the usual brisk Northerlies and accompanying swell.

We rose early (ish) the next day to find another grey day and the shoreline invaded by clam fishermen. The good news was that the wind, as forecast, was light! 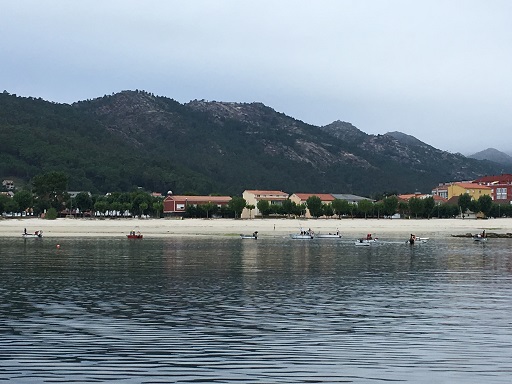