After leaving Viveiro marina we moved around to anchor off Playa de Covas by the entrance channel. It was a very sheltered anchorage ( although not sure what it would be like in very strong Northerlies) and we slept soundly. This time there was one other yacht at anchor when we arrived and before nightfall three others arrived and dropped the hook. We didn’t bother blowing up the dinghy and stayed aboard for the whole of the second day before setting off to Cedeira the next morning.

The forecast for the 33 nm trip was one of light North East winds increasing as the day went on. And for once the forecast was spot on! After 3 hours of motoring the engine went off and we were goose winging as we passed by the feared Cabo Ortegal. Whilst this is not somewhere to be in the wrong conditions, today (6th July) the Cabo was a Gato (pussycat)!

We goose winged most of the rest of the way, until we gybed the genoa and headed towards the Ria, often above 7 kts and occasionally topping 8. As we entered the outer part of the Ria we furled the genoa and there was plenty of room inside, beyond the breakwater, to drop and stow the main – being cautious of the large shallow area at the head of the Ria which uncovers at low tide, seen in this photo: 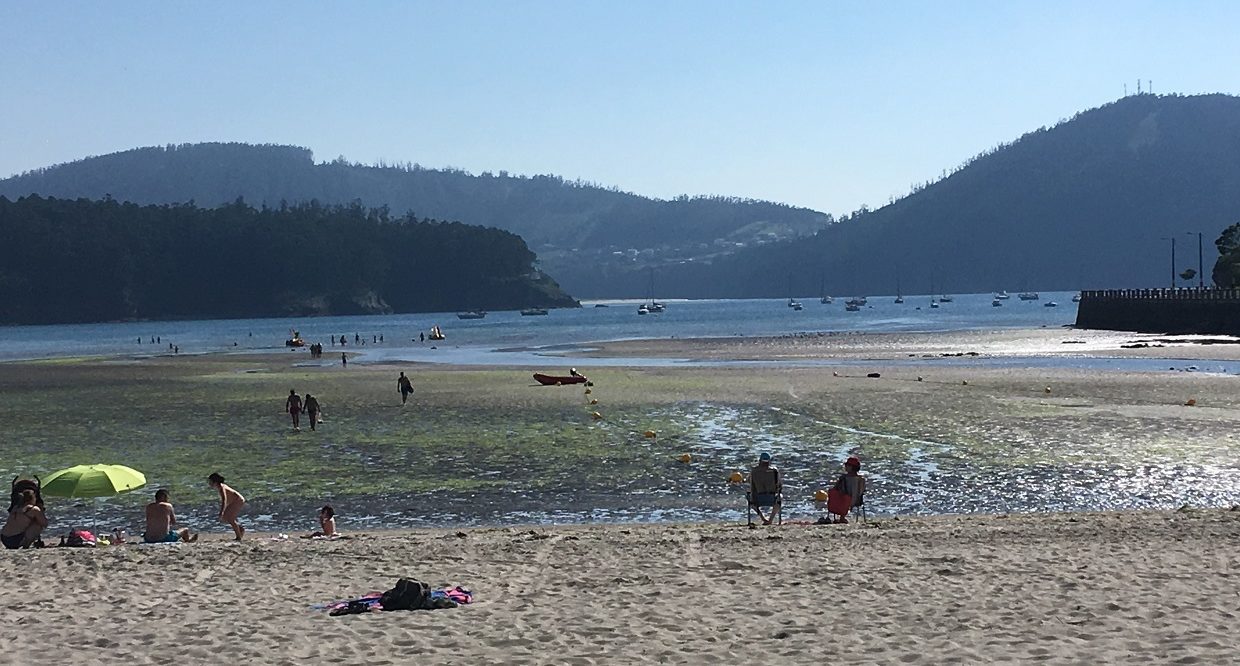 We anchored with shelter from the breakwater of the fishing port, with 3 other yachts already anchored. we stayed 6 nights on anchor with numbers of anchored yachts gradually increasing to 15 by the time we left. This was an international fleet, with French, Belgian and the odd German yacht as well as a few Brits.. It seemed that after a slow start the season was finally in full swing.

We arrived in full sunshine on a beautiful day, and the Ria looked at its stunning best – we decided this was the prettiest place we had visited so far this year: 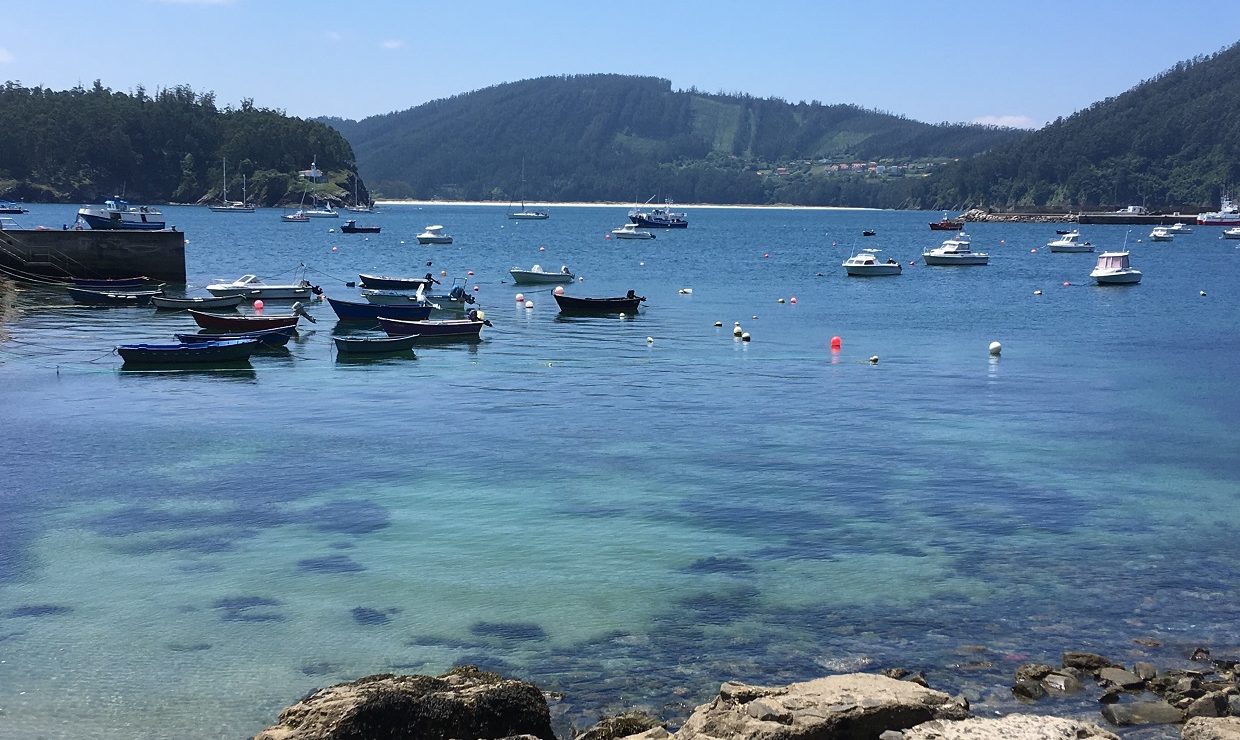 There is no charge to anchor in Cedeira and we decided to stay put for several days to enjoy the place and rest the wallet! This meant blowing up the dinghy and putting on the outboard motor – which Val did (to save Paul’s bad back) with Paul operating the hoist on the arch. This was the first time using the dinghy since the arch was installed and we were interested to see how it coped with the dinghy maneuvers. The dinghy dock (floating pontoon) is sited to the right of the old harbour, which was a good way off – we were pleased that the outboard started third pull after a year and a half of inactivity (our 2 stroke Yamaha may have a 30 years birthday this year but has proven very reliable – oops; kiss of death!!)

Each evening we hoisted the dinghy out of the water in a horizontal position with the outboard still attached. This was the first time we had used the attachment points on the arch designed specifically for this purpose. The system worked very well. When traveling with the dinghy inflated (but outboard removed) the arch design allows us to easily hoist the dinghy vertically and strap it to the transom. We could easily add davit arms to the arch to carry the dinghy high out of the water and horizontally (with outboard still attached) if we wanted to – but the dinghy is less vulnerable carried vertically in a very heavy sea; and with the outboard hoist it will be not much effort to install and remove the outboard (once we have relocated it to the rear of the pushpit). At the moment we are happy to stick with the planned routine. Here is a photo of the dinghy carried on the stern (taken in La Coruna). 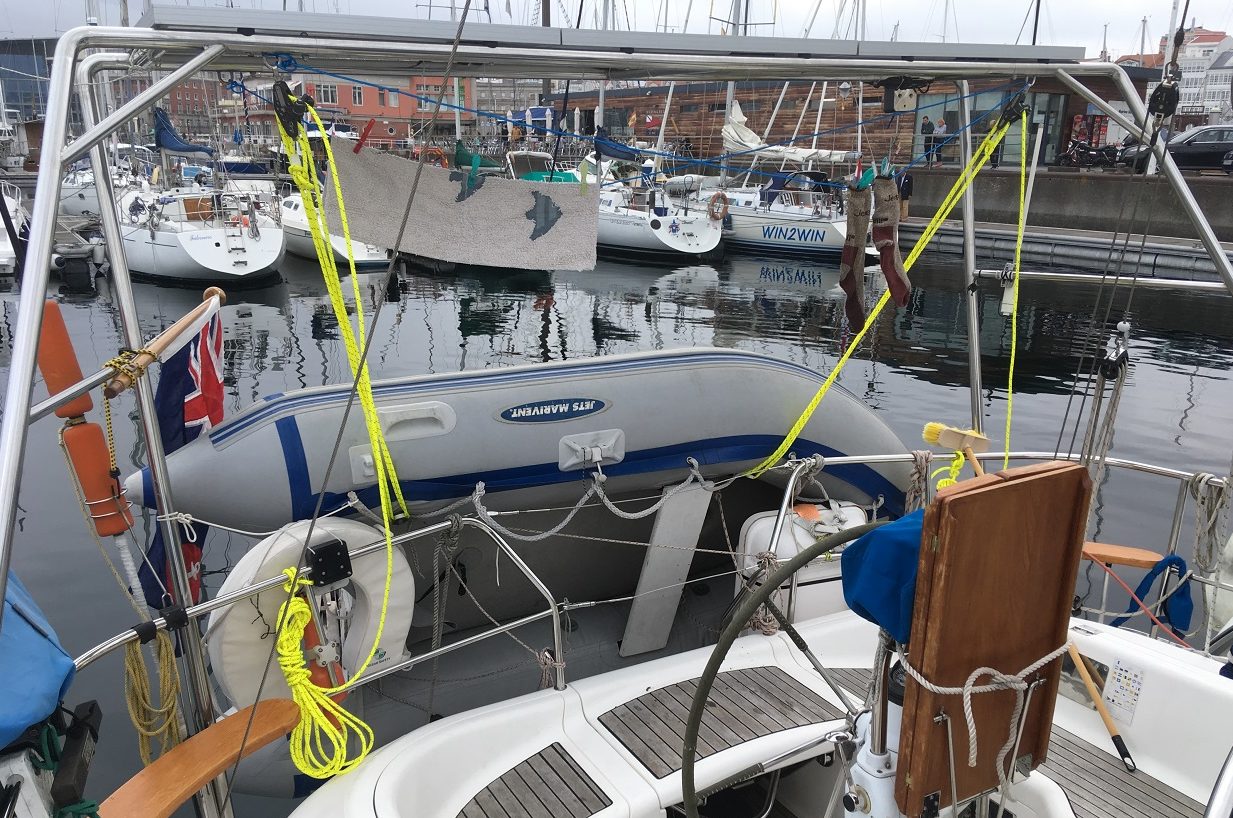 Our friends on Shadowfax arrived in the Ria just behind us but opted to anchor in the mouth of the Ria on the first night and reported good shelter in the conditions (I recall that the swell was from somewhere close to North).

We think they were somewhere below the fort, near the cetareas shown here: 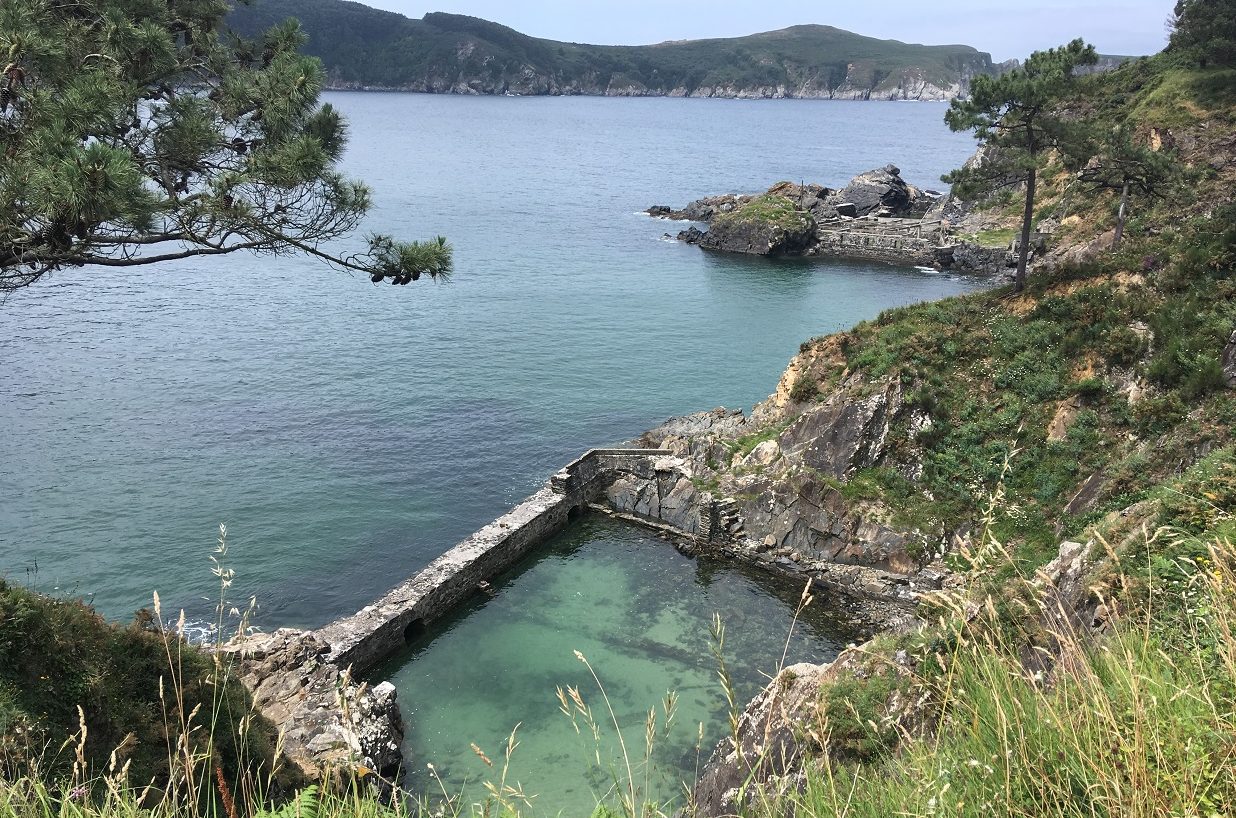 They sent their drone into the main anchorage to take a photo of us in the sunset (you can see us in the cockpit here): 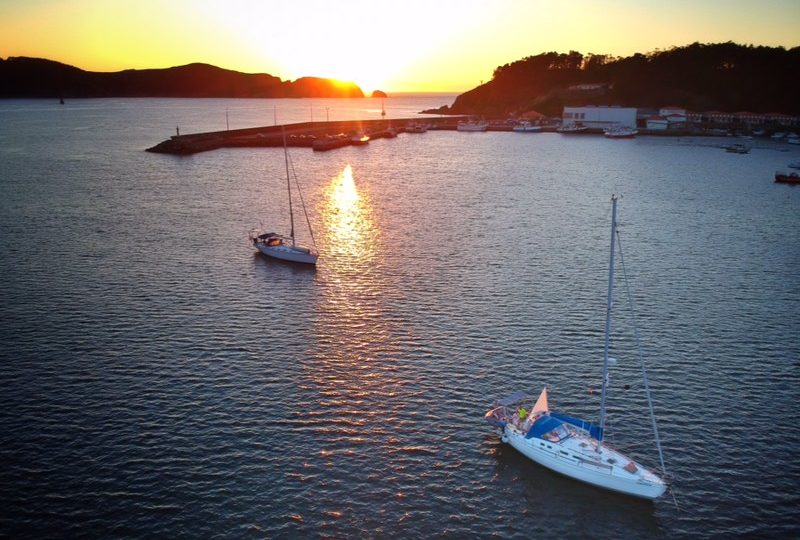 On the second day they moved into the main anchorage and we joined them in the town to firstly have a pizza with Dad John and his wife Julie, before watching England beat Colombia on penalties in the World Cup when Tim and Emmie joined us.

Here are Val and Julie at the side of the river that separates the old town (to the West) from the newer part as we walked from pizzaria to the bar. 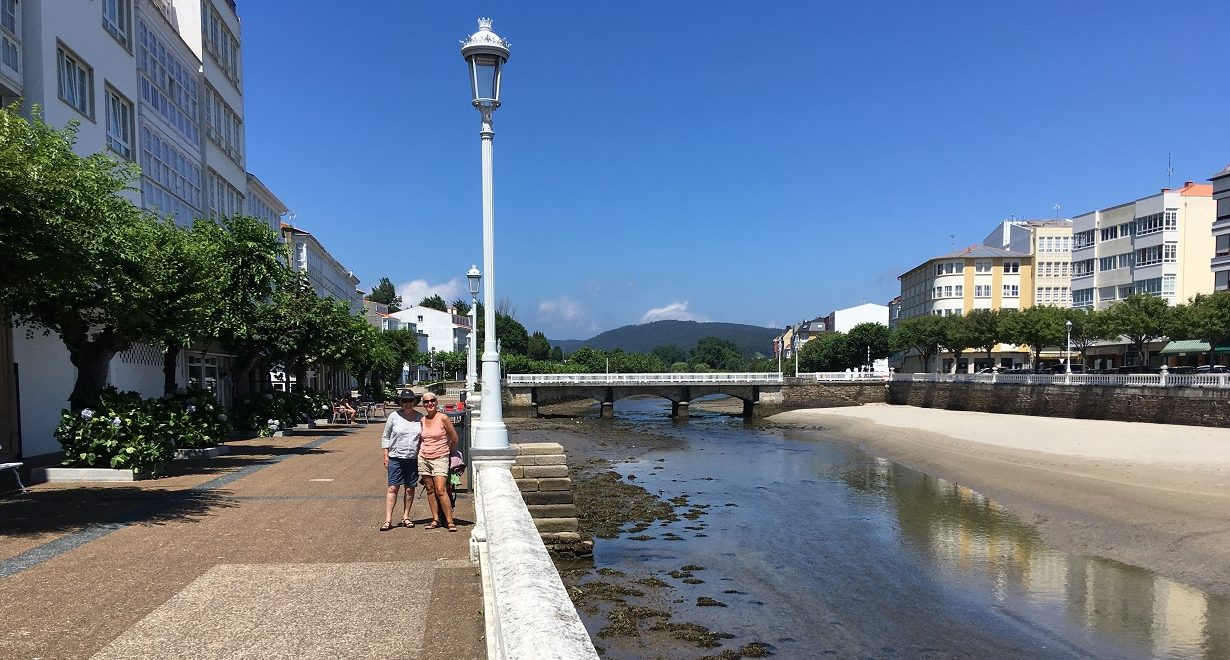 We invited the Shadowfax crew on board for a seafood linguine the next evening – mussels, razor clams and prawns with trimmings and linguine, all cooked on our single induction hob running from the inverter and accompanied by the local Albarino wine that we are becoming addicted to! We learned a new recipe for a simple but delicious chocolate cheesecake that Emmie brought (cream cheese and Nutella on a biscuit, nut and dried fruit base – yummy!!)

Tim and Emmie had purchased an induction hob based on our earlier recommendation but sadly their inverter does not run it (possibly not a “pure sine wave” inverter or maybe just not quite powerful enough – the jury is still out). So far we have still used gas only 3 times this year, and our 1 kw kettle and induction hob were used for the 6 days at anchor here.

The town of Cedeira has a smallish shopping centre with good provisioning. We especially liked the old town with very narrow streets and a peaceful square at its heart, where we had a picnic lunch: 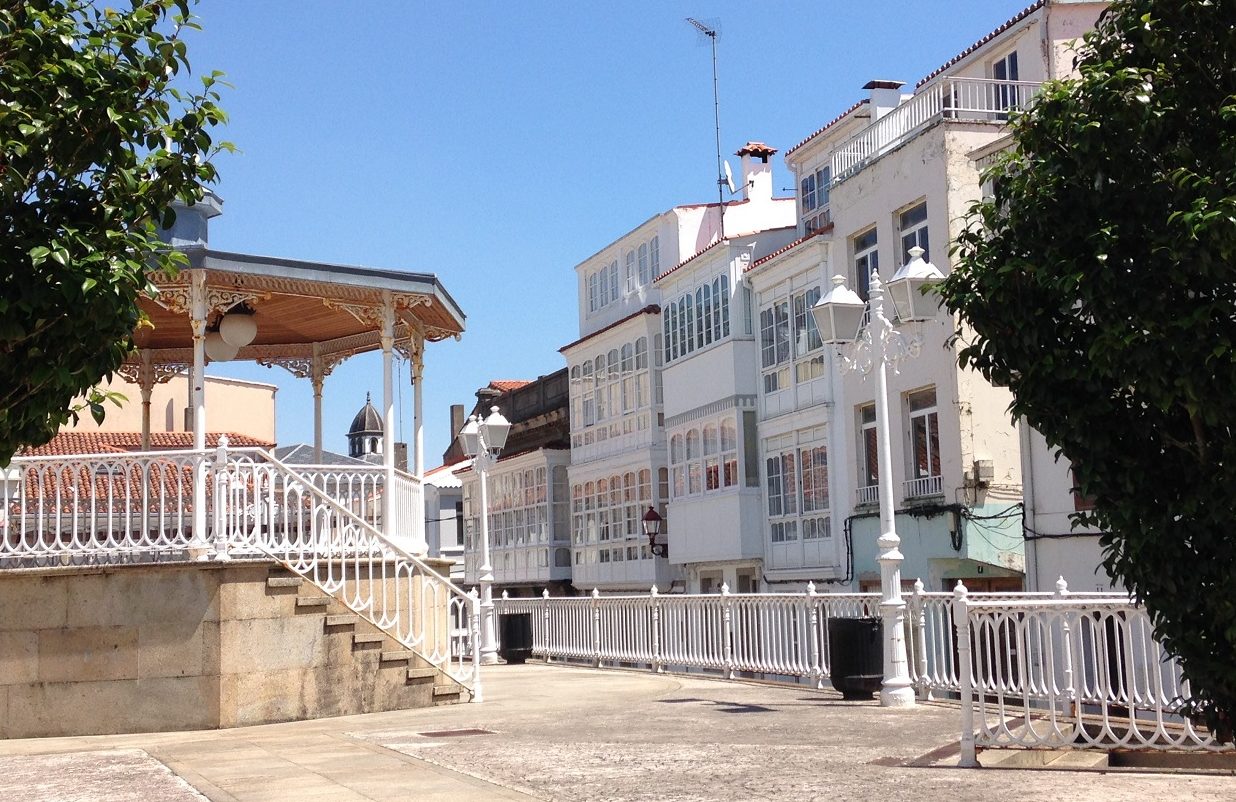 Another day we walked through the fishing port and up to the fort above, which had a small, but staffed and free to enter display. 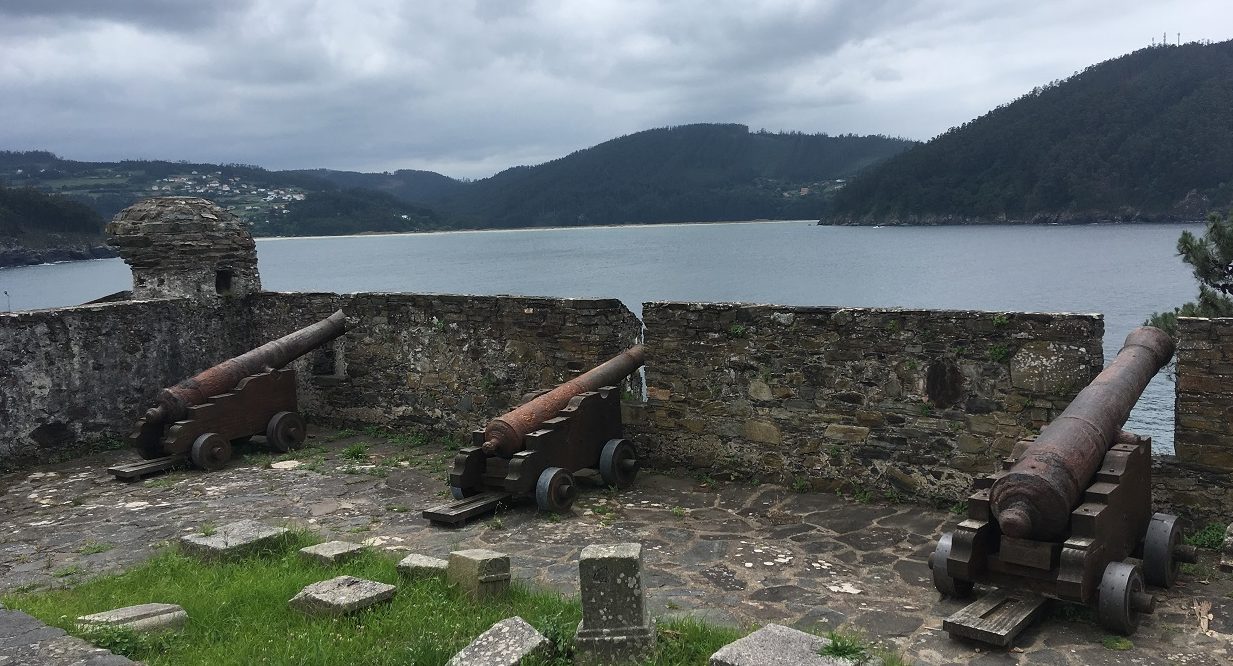 From there we walked high above the Ria back into the old part of town, with good views (Calypso third yacht from right, centre pic in the distance): 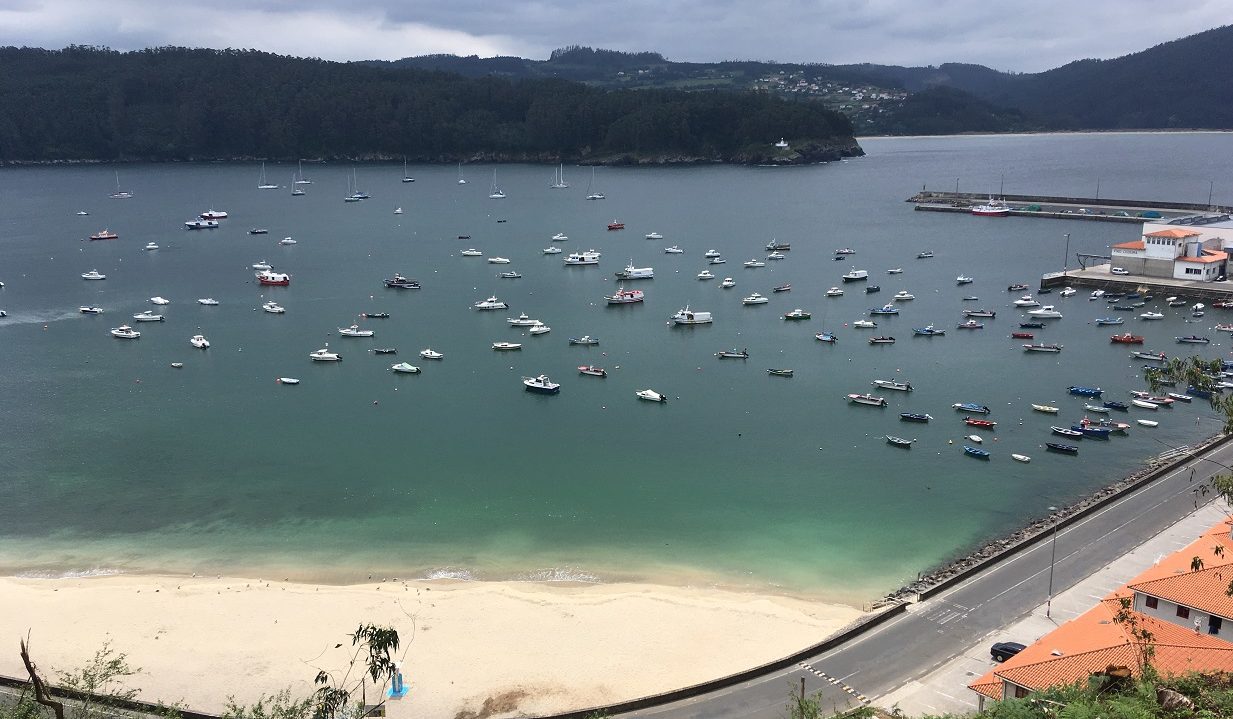 On one very hot day (27 or 28c) we took the dinghy on a 1.5 nm round trip to Playa de Vilarrube, a huge stretch of beautiful sandy beach, backed by dunes, and with few people there we felt to be on a quiet Carribean island! We took our cockpit sun shade and used the dinghy as a windbreak as we picnic’ed – and as we dried off and warmed up after a cold (and brief!) swim.

At anchor (or on mooring balls) we have always sailed around a lot – which does increase the chance of dragging the anchor. We now put our home made anchor riding sail to the test (it is photographed in the last blog, Viveiro, but there was not wind to speak of there). We think that it did have some effect as we were not yawing around any more than the boats around us. Indeed an odd one was moving much more than we were in strong winds up to around 30 kts through the anchorage over much of the 6 days we were here. We do, however, need to make a modification – to add battens across each sail at the mid-point to reduce the flogging of the sail’s leaches. This will quieten it down and make it more effective. We will report back – again.

Cedeira’s comedy moment resulted from Val’s confusion in the darkness – “why does that yacht have a flashing anchor light?” she asked. “That’s a lighthouse” was the reply!! In her defence she had removed her glasses……

Given the strength of the wind for much of our time here we were happy to have our oversized (25 kg) Rocna anchor on our bow. We slept soundly when those high winds blew through the anchorage most evenings – except when the anchor alarm went off twice in the early hours! Unfortunately we had forgotten to set the alarm when we dropped anchor so that we could set a circumference around its position. Instead we remembered it when settled – and in spite of setting a wide radius from that position we did have a couple of big wind shifts, leading to a couple of rude awakenings! Hopefully that’s lesson learned which won’t be repeated!

Cedeira was certainly the prettiest spot yet, and was just what we had expected from the Spanish Rias. However after 6 days it was time to move on to our next destination – La Coruna / A Corunna. First of all though we had to retrieve our anchor. It was so well set after a week of high winds that we had to drive over the anchor to break it out of the muddy sand – and when it emerged at the surface it seems that the anchor had buried itself completely. We have, however, seen and heard reports that an odd yacht has dragged or struggled to set its anchor here due to debris on the sea bed (possibly from the fishing port activity). However other than such bad luck, holding here seems very good.

This year we had now anchored as many times as we had in our entire sailing experience – with more hopefully to come, but first a city centre marina break……….