The winds were fairly gentle as we headed north from La Turballe towards the Vilaine River, but we did have a very pleasant sail for most of the way, dropping the sails as we we reached the point where the approach narrowed and shallowed. We are perhaps over-cautious, but didn’t want sails up in case we needed to hunt for deeper water. In theory we should have had enough water across the whole of the approach (given our arrival with a 2.3m rise of tide and a minimum depth of around 0.8m below chart datum (giving us a minimum of 3.1m depth of water – so 1.15m beneath the keel).

However the chart clearly states that in this area depths constantly change and that charted depths may be inaccurate. There was certainly a point that we crossed (perhaps for 100-200m distance) where our depth sounder showed that we had only around o.6m beneath the keel, suggesting that this area was shallower than charted by around 0.6m. At this point we slowed and watched depths carefully, but other than that depths were exactly as expected and there was very little swell to worry about.

As we approached the barrage and access lock the heavens opened and so we slowed and hid under the sprayhood, allowing another yacht to pass – we could then follow them to the lock and see how things worked! As we arrived (in sunshine) there were a number of other yachts in the lock (seen on the left of the photo) and we watched the yacht that had overtaken us head straight in, rather than tying to the waiting pontoon (seen at the right of the photo).

The lifting road bridge sits above the lock, and it pays to arrive early for an opening so that you can enter the lock and wait (sometimes there is not enough space for all boats wanting to transit the lock). The front yachts get close to the road bridge, moving forwards when the bridge opens to allow other yachts waiting outside to squeeze in behind, before the lower lock gate closes.

Inside yachts wait 3 abreast (or 4 for the small boats). We entered and tied up in the middle, with lines taken to yachts either side. Those yachts had looped mooring lines around chains draped down the sides of the lock. We then waited for an hour or so, having lunch and chatting with adjoining crews. Shortly after us two more yachts arrived, each bearing the Cruising Association burgee. One burgee was flown from the top of the mast – denoting that our Association president, Judith Grimwade and husband Mark were behind us. We got chatting and were to meet up with them a few days later. 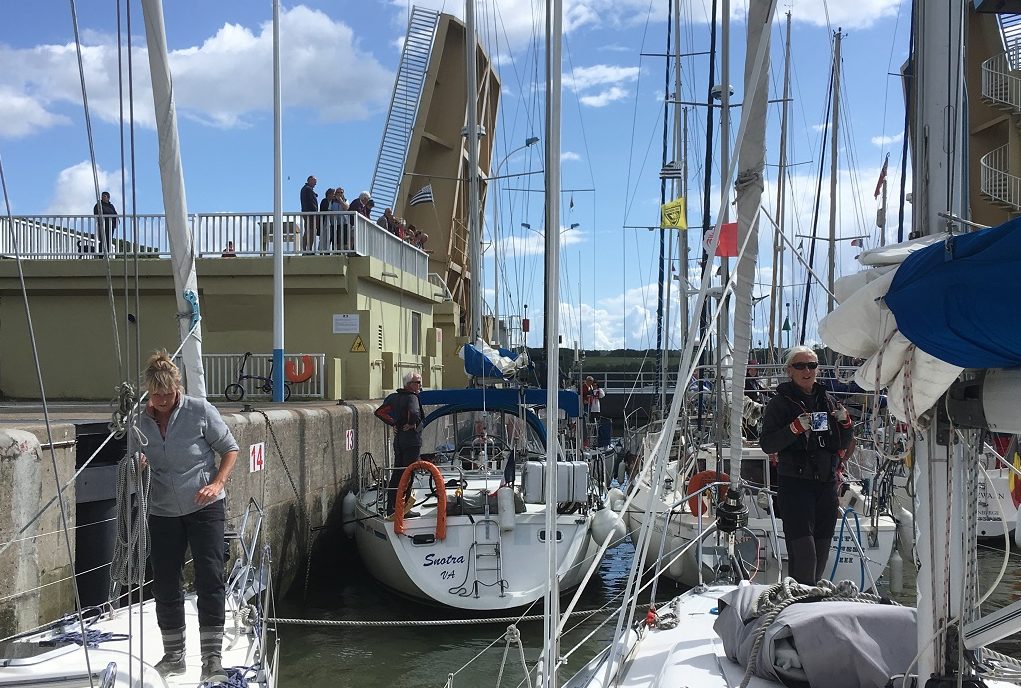 You can see a few spectators in the photo above – and just past the bridge they lined both sides – we counted over 50 spectators. We witnessed about 120 at a later opening when we joined the throng, to witness the chaos that follows after the bridge opened. In the photo above a German crewed boat sits in front of us. New to this, as we were, the helm made a bit of a mess of moving forwards, only to be shouted at and verbally abused by a French motor yacht driver. Paul smiled and suggested he “calm down dear”, but he wasn’t in the mood. Fortunately there is a lock keeper who directs the order to shift forwards.

When we returned  as spectators a few days later, the 120 spectators were treated to a yacht getting itself at 90 degrees to the direction of travel, parked across the bows and stern of neighbours. For those who follow, there is a useful guide to entering/exiting the river through this lock HERE

Note that the lock was closed for 3 days a week for much of the summer due to a water shortage. Lock opening times can be found at the same web site.

After we entered the lock we took the opportunity of undertaking a test of the performance of our propeller in flat, tideless waters and with no sails set. We measured the speed at 200 rpm increments from tickover to WOT (wide open throttle), both with and against the  10 kt wind. we were surprised to find that the speed was significantly increased by the action of wind on the boat – no doubt our large sprayhood acting as an efficient downwind sail! As an example at 1,800 rpm our upwind speed of 3.1 kts became 4.1 kts downwind.

We are still undecided whether to change the propeller – the cost will be over £2k to increase our cruising speed from 5 kts to 6 or 6.5kts. However put into context – a 5 hour motor will become 4 hours, and if chasing a tidal gate or fading light then that can be important.

Anyway, enough of that, back to the delights of the Vilaine river. The river is obviously tideless and the barrage gives depths in excess of 3m right the way up to Redon, 25 miles away. At the entrance is Arzal, with a huge marina but little in the way of a town within walking distance. Just a few miles upriver (about 4) is the pretty little town of La Roche Bernard (LRB), our destination on entering the Vilaine. Beyond that are a couple of small marinas and pontoons and miles of opportunity to anchor amidst fields and farm animals before arriving at the marina in the heart of the small town of Redon.

Unfortunately we didn’t have time to explore the delights of the river other than having a couple of nights at the LRB marina before heading to our winter base.

Here is the view as we arrived at LRB, with the old port along an inlet to the right (as seen from above in the top photo) and the marina pontoons to the left – the first one being the visitor pontoon which was full when we arrived, however a space was found for us among the full time berth holders to the left of the photo.

The marina was in a very peaceful setting, enhanced by the lack of swell! There is a very high road bridge a few hundred metres upstream, but it seems to carry little traffic and we couldn’t hear that which did cross. 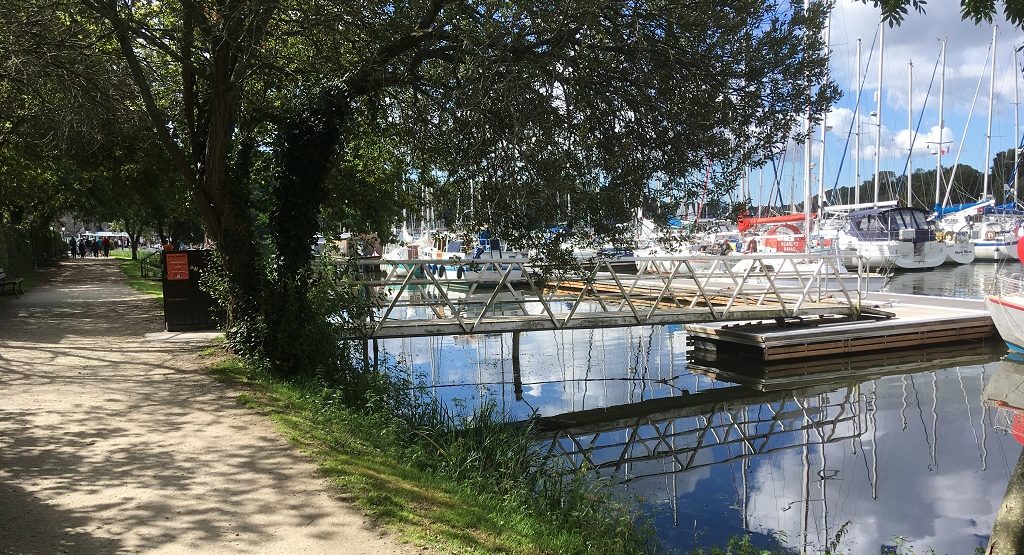 We were surprised at just how many of the yachts were British flagged. One British couple we got talking to said that they had stopped off on their way to the Mediterranean and never left. Apparently this is a frequent occurrence, with LRB being known locally as “the graveyard of ambition”!!

Apparently marina fees at LRB are quite reasonable, and an annual contract comes with the “Passeport Escale” scheme, whose holders are entitled to have 2 free nights at the many participating marinas in the area multiple times (having to leave for one night before returning for 2 more free nights). Many retired British cruisers take a contract here on the basis that they can then take their summer cruise in the Southern Brittany area economically.

Facilities in the marina were fair to good, but (as usual) the sexes shared. We may get used to this – but then again we just might not! The cost, now in shoulder season, was a modest 23E for our 11.46m.

There are a few nice bar/restaurants around the old port, but we opted to eat in the main town square – at “Les Deux Magots”, an excellent restaurant. This was the view from the Magots as we left:

There is an old quarter with various artist’s studios and we found an excellent pottery, where we managed to just about complete our Christmas shopping! There are two supermarkets in walking distance from the marina, and all in all we quite like LRB.

Around the town were signs for a weekend of culture – the very weekend we were there. We went into the tourist information office but the young people in there seemed more interested in flirting with each other in the back office than speaking to us, and as usual there were no brochures for the event on display. As an aside, we have found that there are very few leaflets/brochures in the tourist information offices (in spite of ample empty wall space) and you seem to have to ask at the counter. Great if you know what to look for – or speak fluent French!

So after the anticipation of a weekend of cultural events, in total we managed to stumble across one – with people in traditional costume eating a shared meal in advance of Breton dancing: 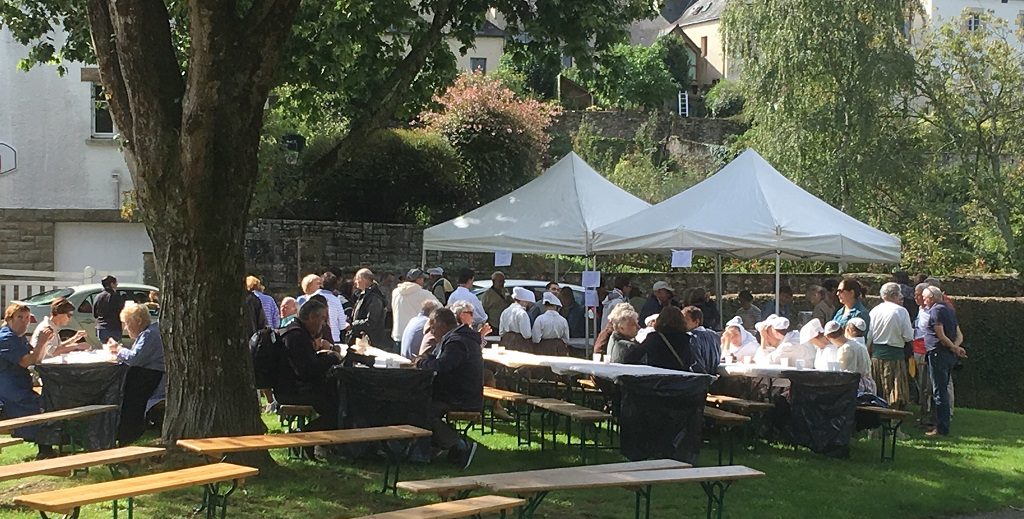 We would have stayed an extra night but the berth holder was due to return and the visitor pontoon remained full (no rafting here!) So we headed back downstream towards our winter base and had a few nights on the pontoons at Arzal. Here we met CA President Judith and Mark, together with another Cruising Association crew, John and Debi on Shiraz.

The 6 of us had a pleasant evening aboard Shiraz, marveling at the skill of John, who had built Shiraz from scratch, starting with “a pile of wood and a set of plans”. John is an engineer by trade and clearly a very skilled craftsman.

We had to have a photo just before they headed upriver to Redon: 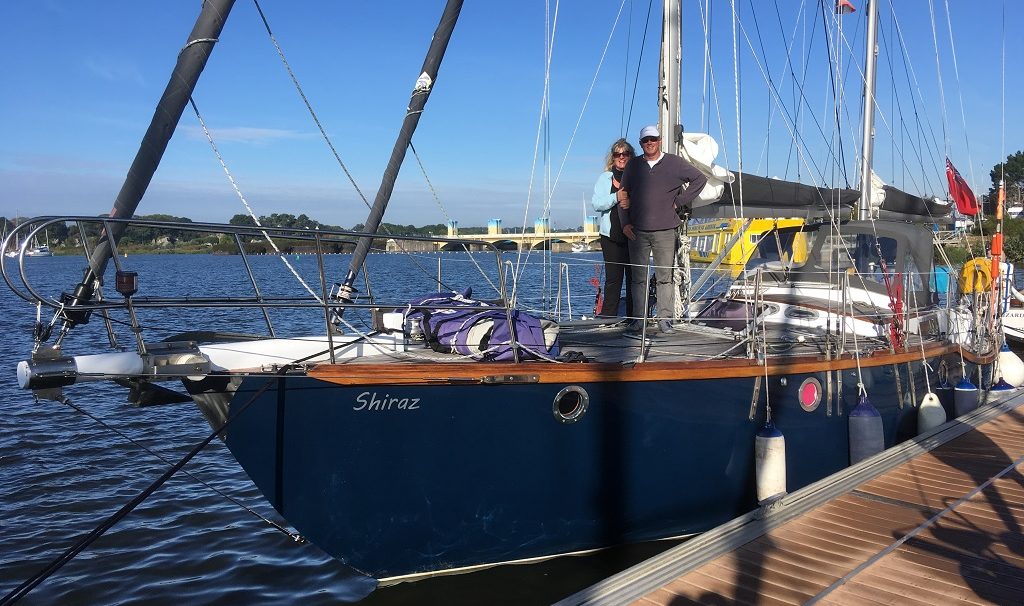 After Shiraz departed we had a night at the Corne du Cerf, a Les Routiers restaurant, with Judith, Mark and yet another CA couple, Roger and Penny. We must find more Les Routiers – they offer amazing value, and we had a lovely evening. A car is required to get to the Corne Du Cerf, but there was also a very good value set meal at the restaurant on site (the one nearest the lock), where we had lunch with Val’s sister Anne who popped in to say hello.

Before leaving the Arzal pontoons we took the opportunity on a calm, sunny day of removing the sails – after drying them in the sun (genoa first:) 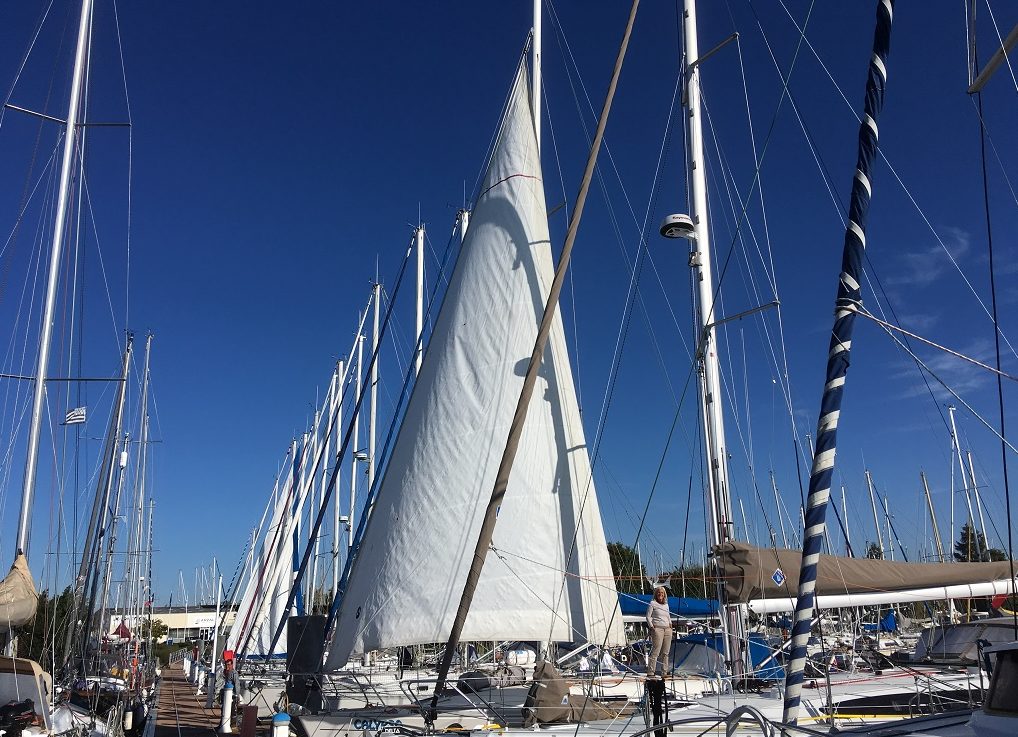 ….and in the sun we celebrated the end of our season with a crepe party on the bow of Calypso, using the purchase of the year – our portable induction hob (not visible here)! We liked the Vilaine river and hope to explore more in the early season next year, before heading towards Spain.