We had a forecast for our 34nm trip that would see us motoring from Cedeira towards Coruna until early/middle afternoon, and so with our propeller issue, and knowing that the forecast doesn’t always behave, we set off fairly early. Actually the forecast was quite accurate. We motored past the minor cape, Cabo Prior in glorious sunshine and a very light North Easterly – directly behind us. As the wind started to build we put up the main and gained half a knot. 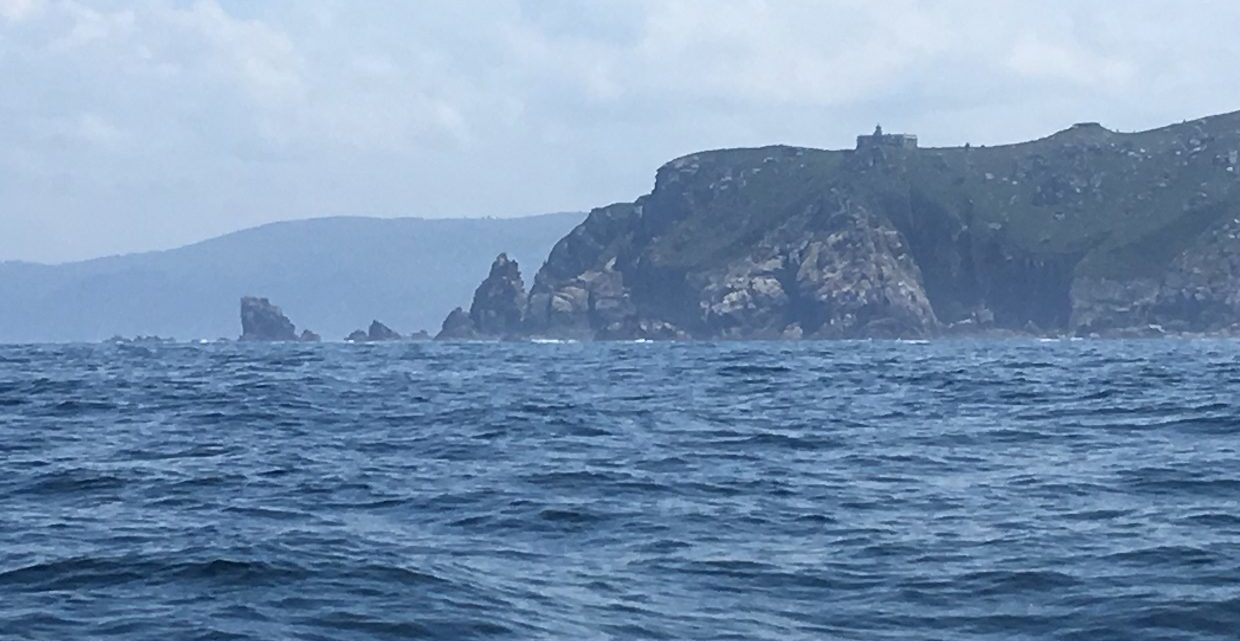 At the appointed hour the wind filled in sufficiently to turn off the engine and soon we were goose winging into La Coruna. This was something of a major milestone for us (we had read much about the place and were excited to be here at last) and so arriving in a fresh breeze at 7.5 knots and seeing the famous Torre Hercules in the distance was quite special:

That was followed by the port control tower over Marina Coruna – also an iconic landmark. As we rounded the outer breakwater we furled the genoa and reached into the port on main alone at over 5 knots, towards a group of dinghies with attendant safety boat/instructor. The water behind the breakwater was pretty flat and so dropping and stowing the main was easy enough here.

We then radioed the other marina – Real Club Nautico Coruna. Their marinero was on the arrivals pontoon and waived us around behind the first pontoon and into a berth away from the main entrance (which would turn out to be a good thing!)

Our friends Adam and Lynne on Charisma were a few doors away – although Adam was in the UK, due to return in a few days. Here are the two girls – pleased to be reunited. As you can see, RCNC is right in the heart of the city:

The fee for up to 12m is 32 euros a night, but as members of the Cruising Association we get a welcome 25% discount. Showers, toilets and laundry facilities are generally to a reasonable Spanish standard.

The best thing about this marina is its proximity to the city centre – right at the heart of the most attractive area. Maria Pita Square and the town hall is just across the road (note – for the Gladis Supermarket exit the square in the corner behind the tree on the photo below and then pass behind the church beyond – it is below the market hall). 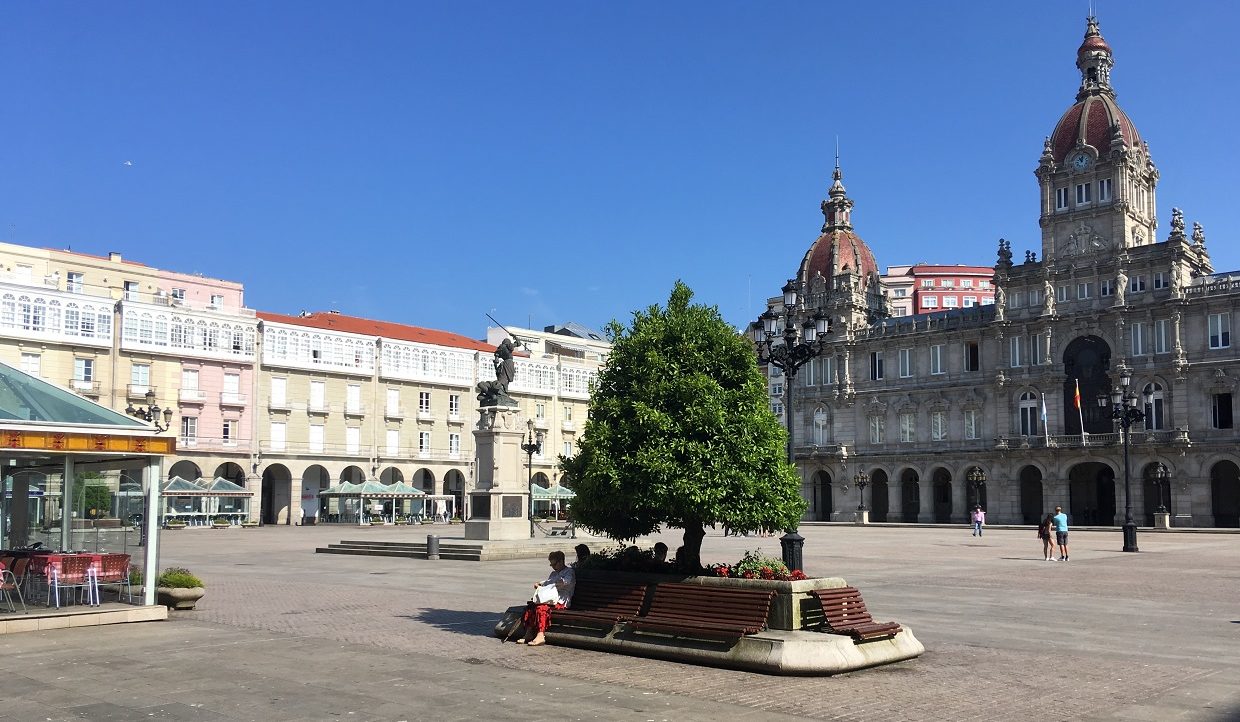 This market hall in fact – obviously not as old as some, and not as good as some, half of the stalls being empty: 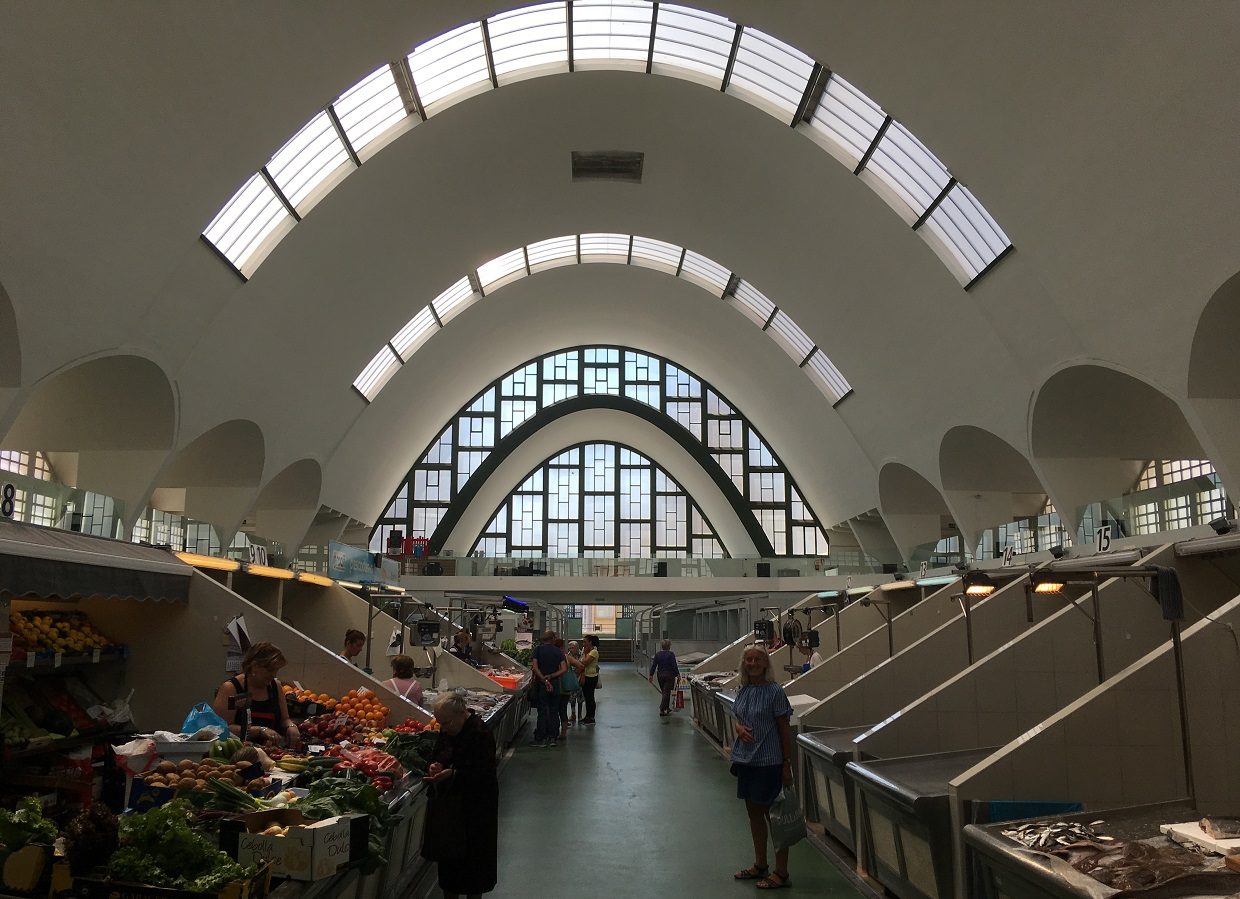 Leading from Maria Pita Square (left of the photo above) is one of the best shopping streets in the city – narrow and with many independent retailers. Also running parallel to that is another narrow street full of restaurants and tapas bars. Unfortunately no photos of those, but beyond is the area with the larger national/multinationals, but where the architecture is still fascinating: 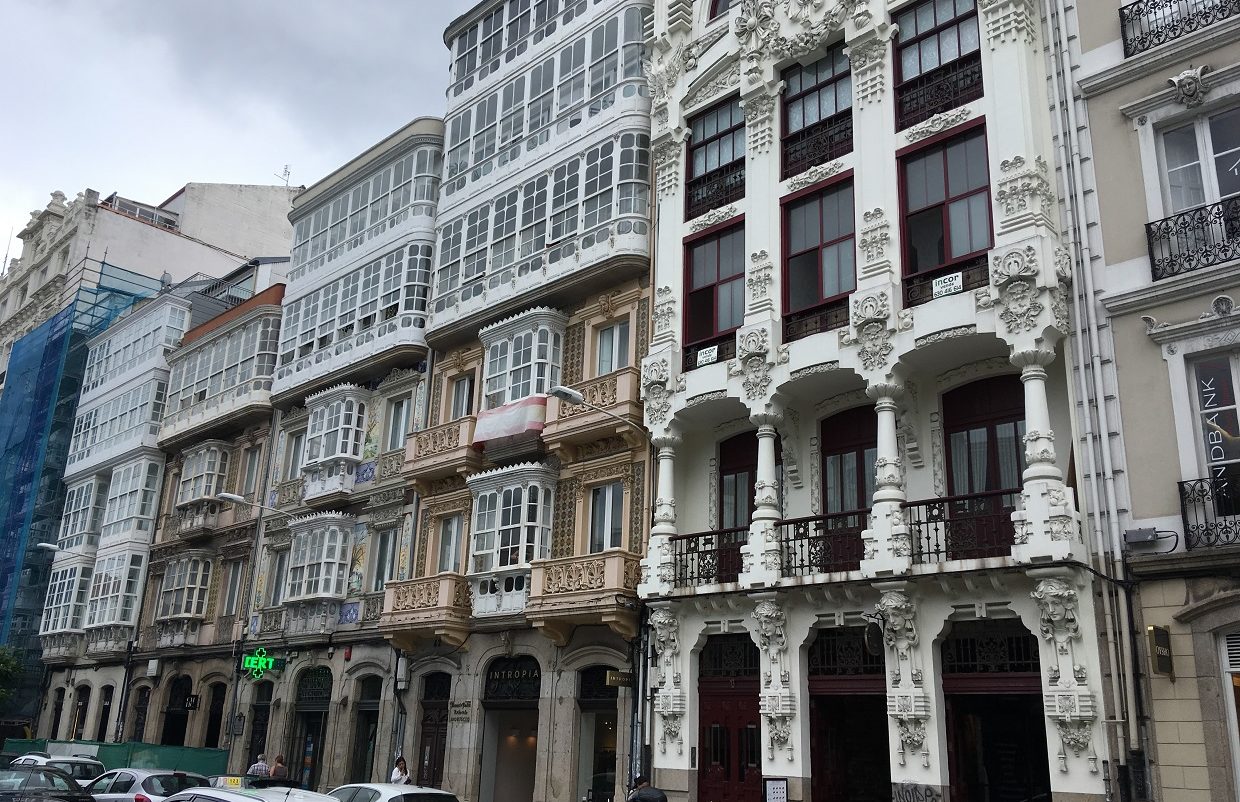 To the right on exiting the marina the largest seafront walk in Europe starts. This goes past the other marina (here taken from the old town). This has outer wave-breaks but is still reputedly much bouncier than Marina Nautico (we only went in here to fill up with fuel). 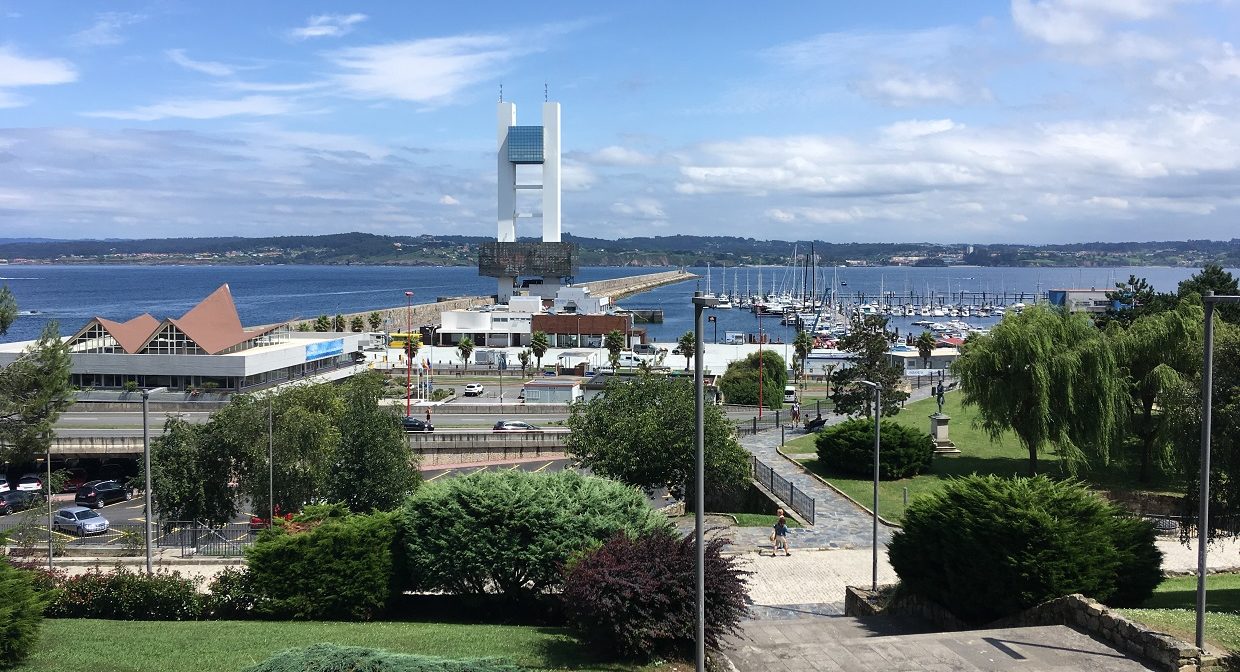 We walked past this marina early in our stay and on around the seafront to see Torre Hercules close up (oldest working lighthouse in the world, from Roman times, but enlarged/ overclad in the 18th century). You can climb it for 3 euro a head but we were feeling tight on the day! 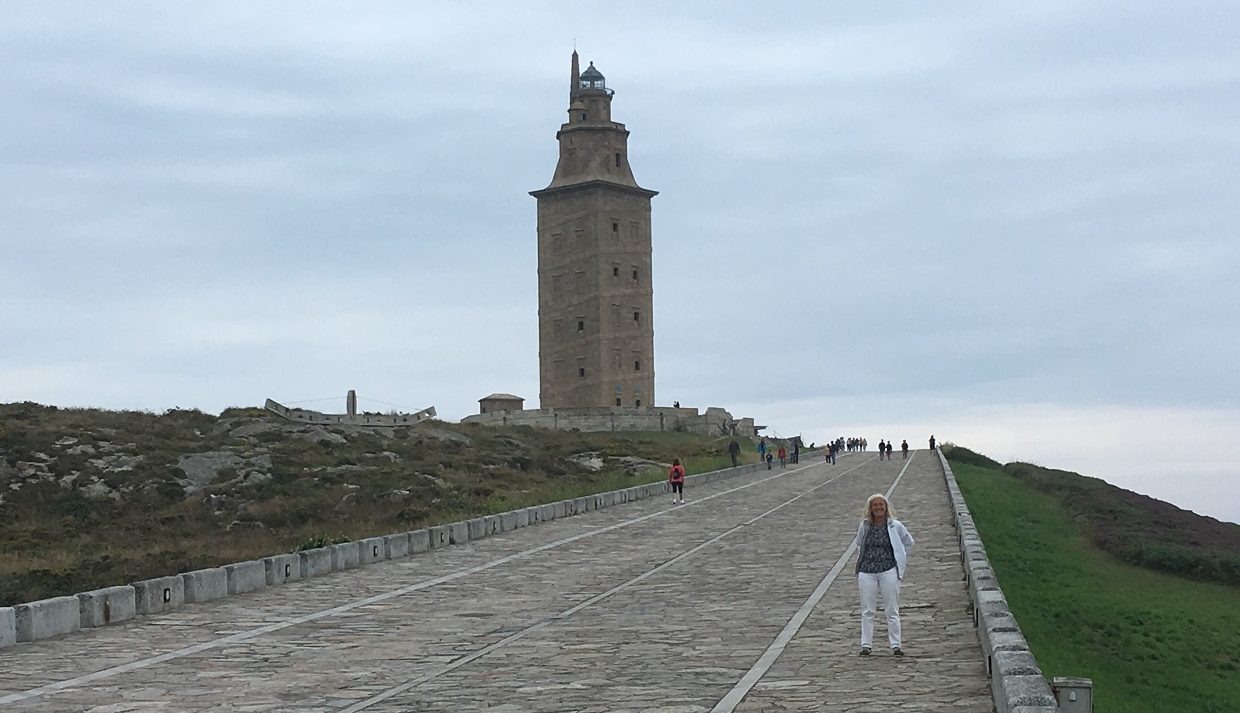 We continued on past this towards Riazor beach – the main beach of the city. This is also just a short walk from the marina. 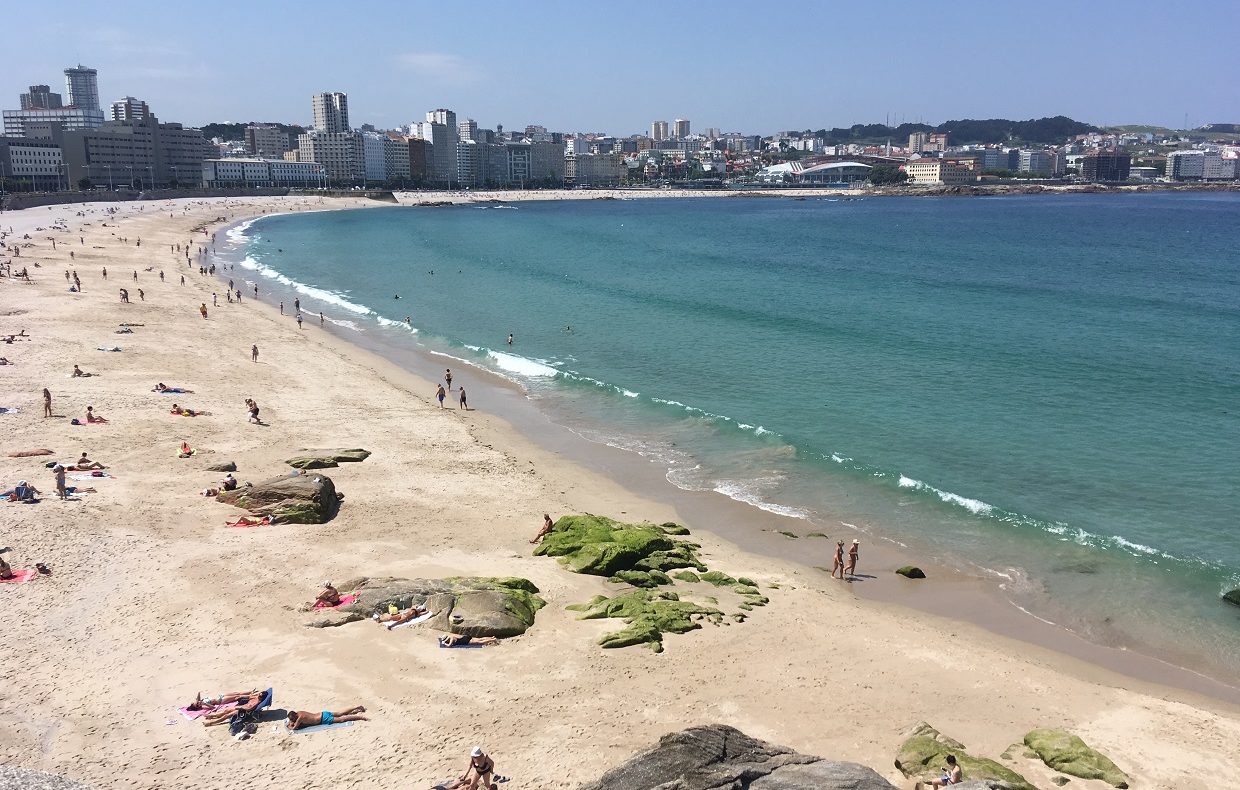 Directly adjacent to Marina Nautico is the cruise ship berth. When we arrived “The World” was berthed there for a couple of nights – with its passenger list (all co-owners) being the rich, famous and royalty. Google it for an interesting read! 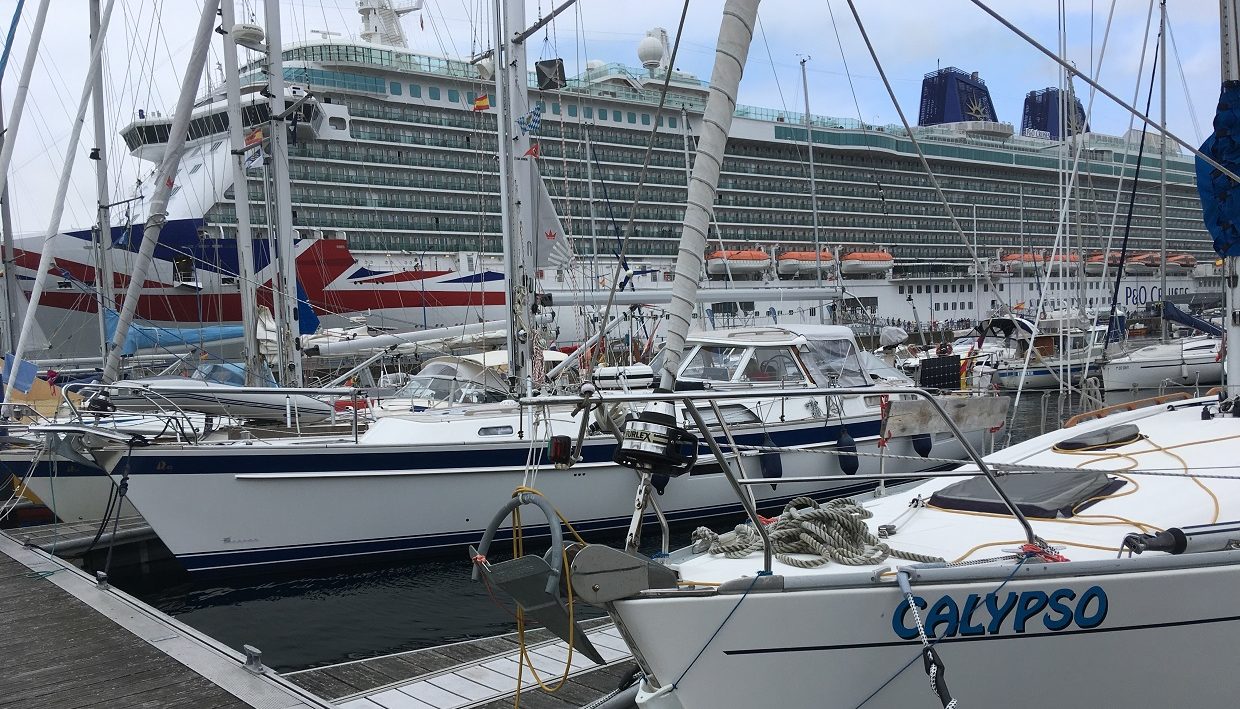 When we first arrived we thought it our duty to keep Lynne entertained as she was obviously pining for Adam! One our first night we ate in one of the restaurants in Maria Pita Square….. 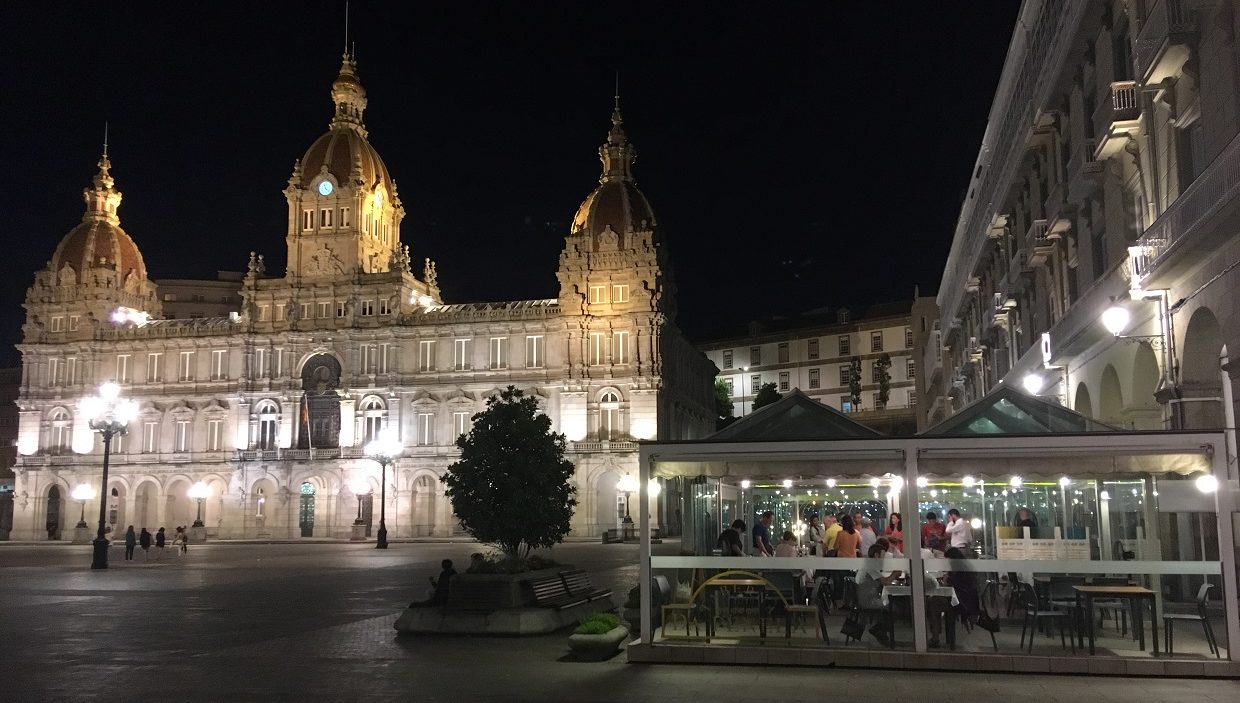 and the next day had lunch of a large plate of “jamon, queso y pan” with Albarino wine – see; she’s not pining any more……… 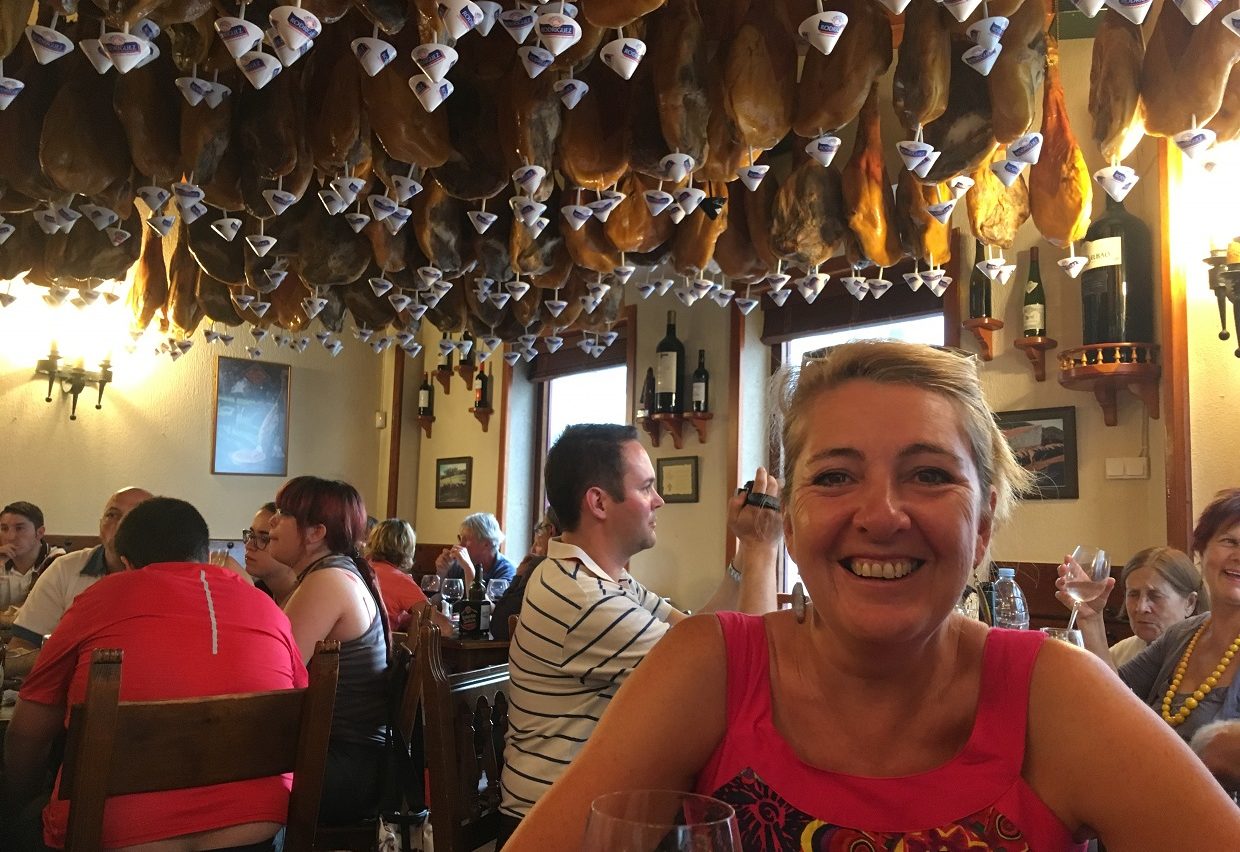 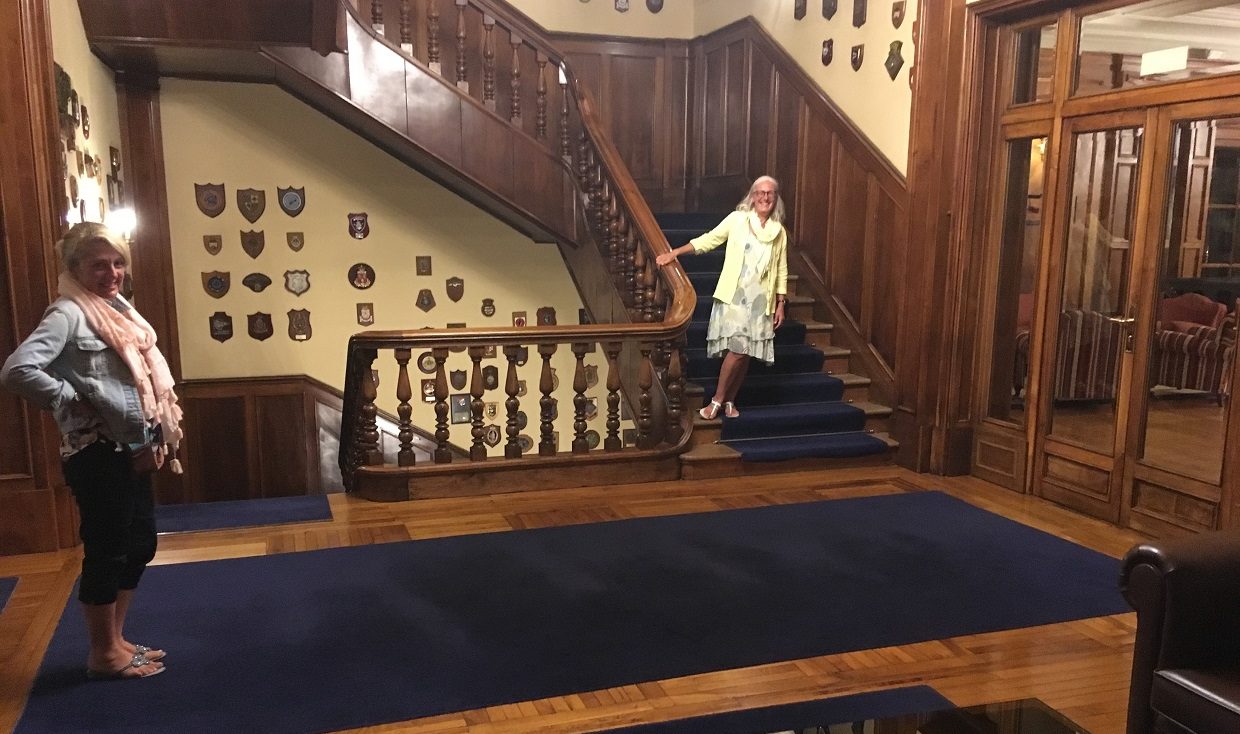 Lynne told Val that she had been advised to go to Maria Pita Square on Saturday to watch the glamorous weddings. And so Paul had to endure a Gok Wan style critique of the various frocks on display – for what seemed like hours!! 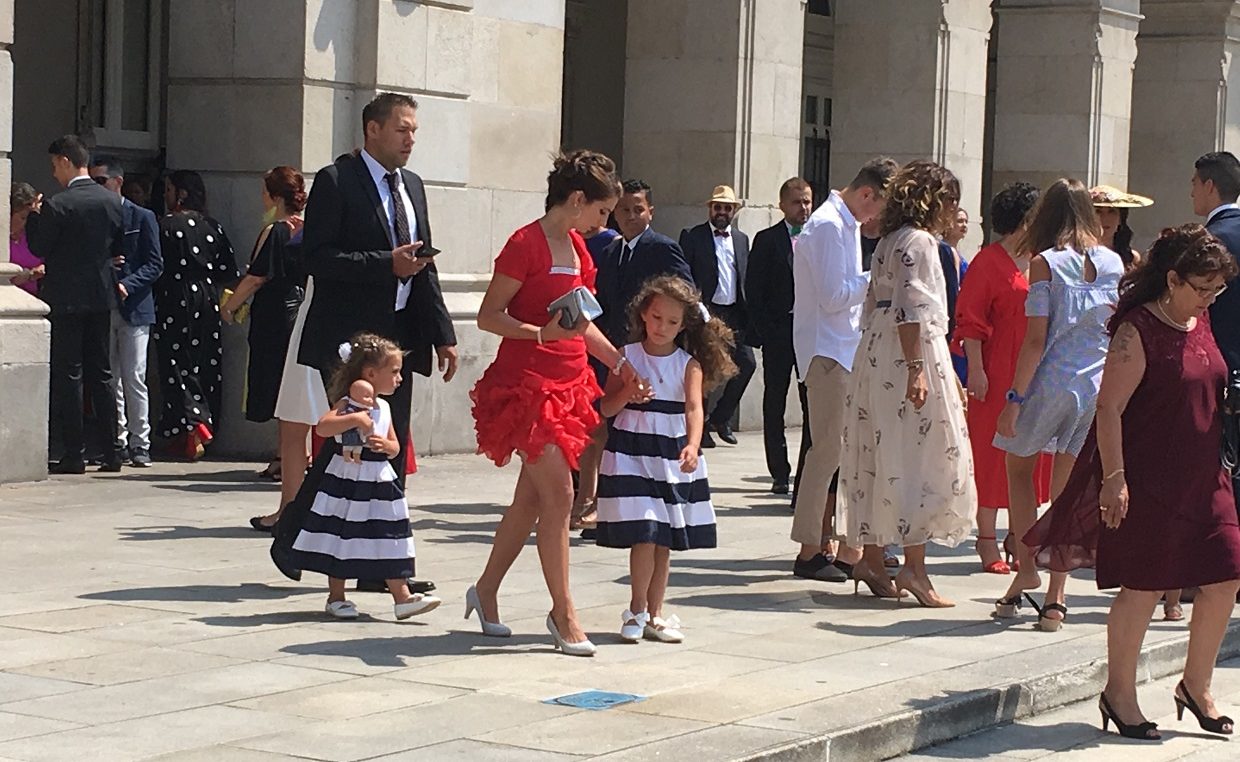 Adam had not seen any of the city before departing to the UK, and so when he returned we went on a tour of some of the better bits – including the old town…… 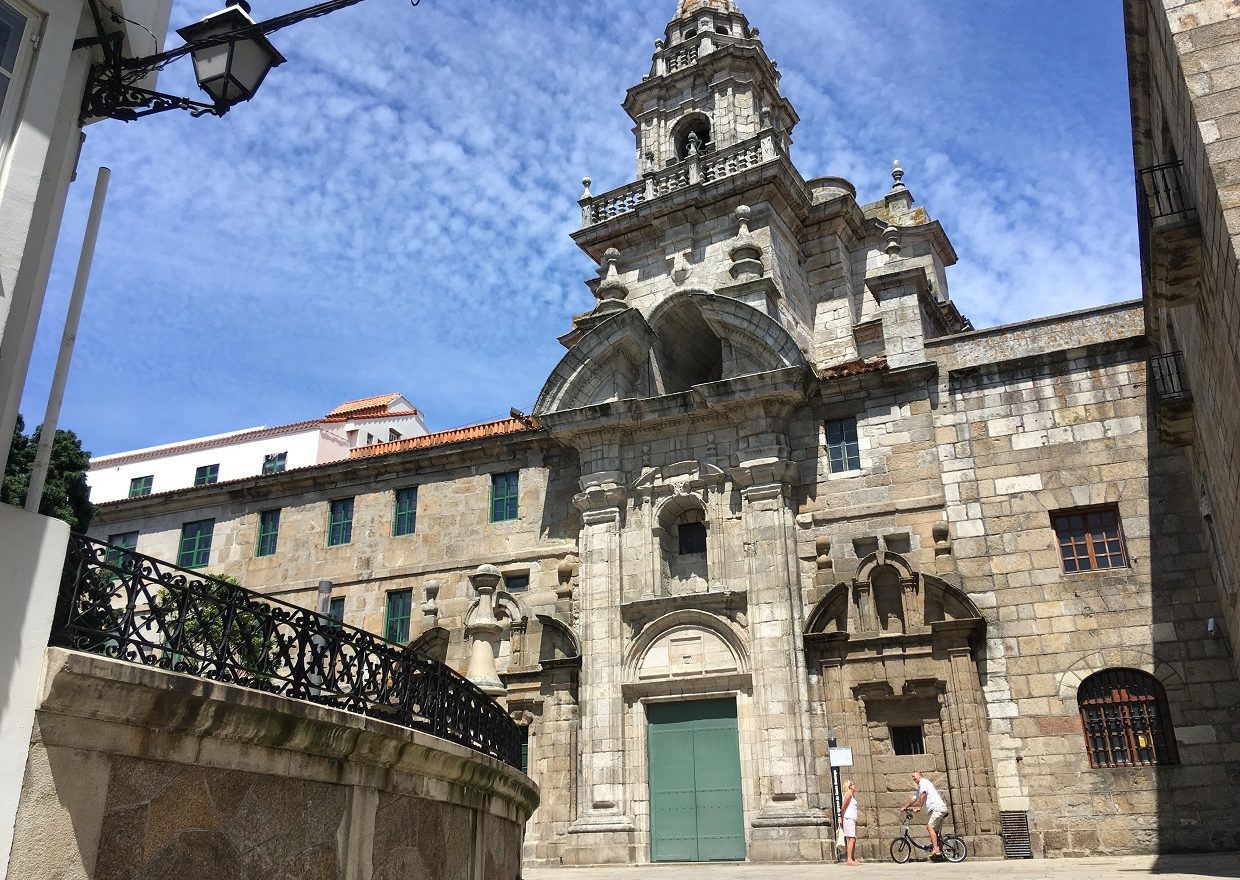 ….and on the day of his birthday we all cycled out to the Torre Hercules and nearby scuplture park for a picnic… 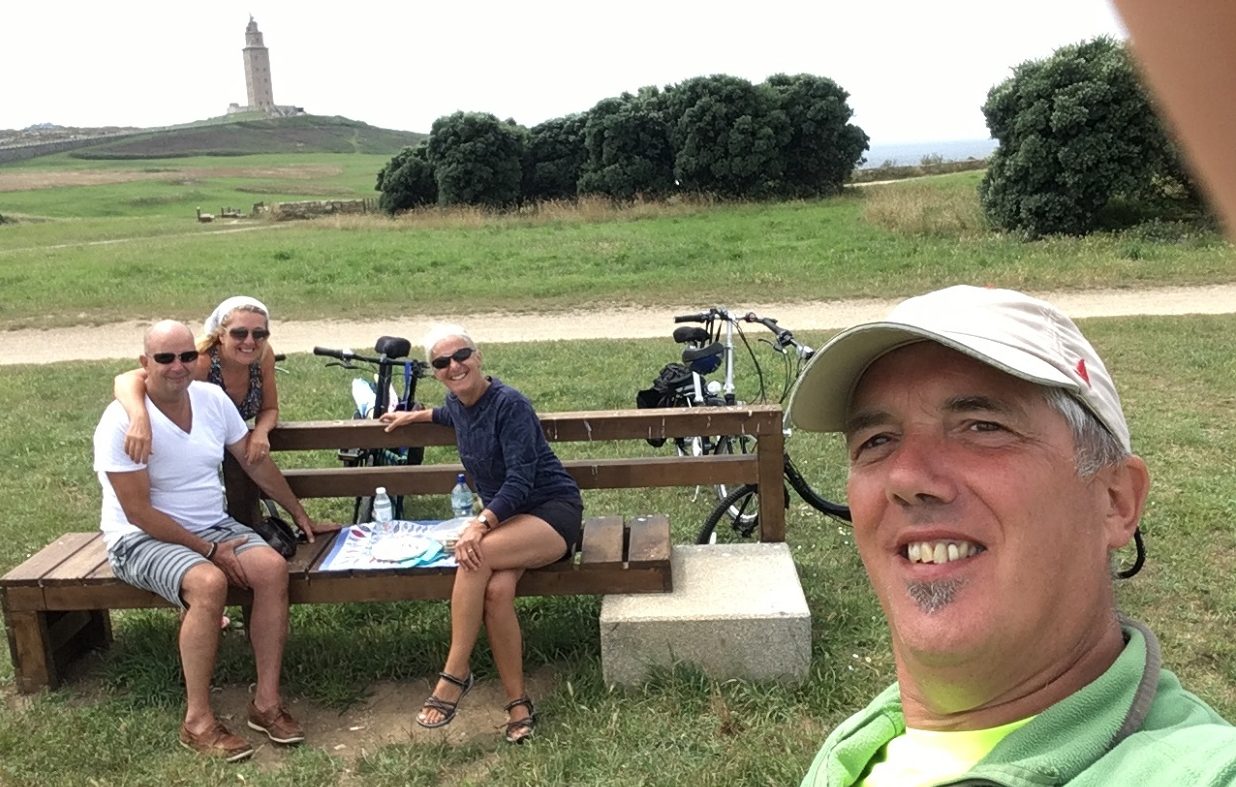 …..returning home via a beach (where Lynne demonstrated that she shares many genes with a dolphin) ….and then getting changed for Adam’s birthday surprise meal at the yacht club, after Lynne managed to persuade him to dress almost smartly for once….. 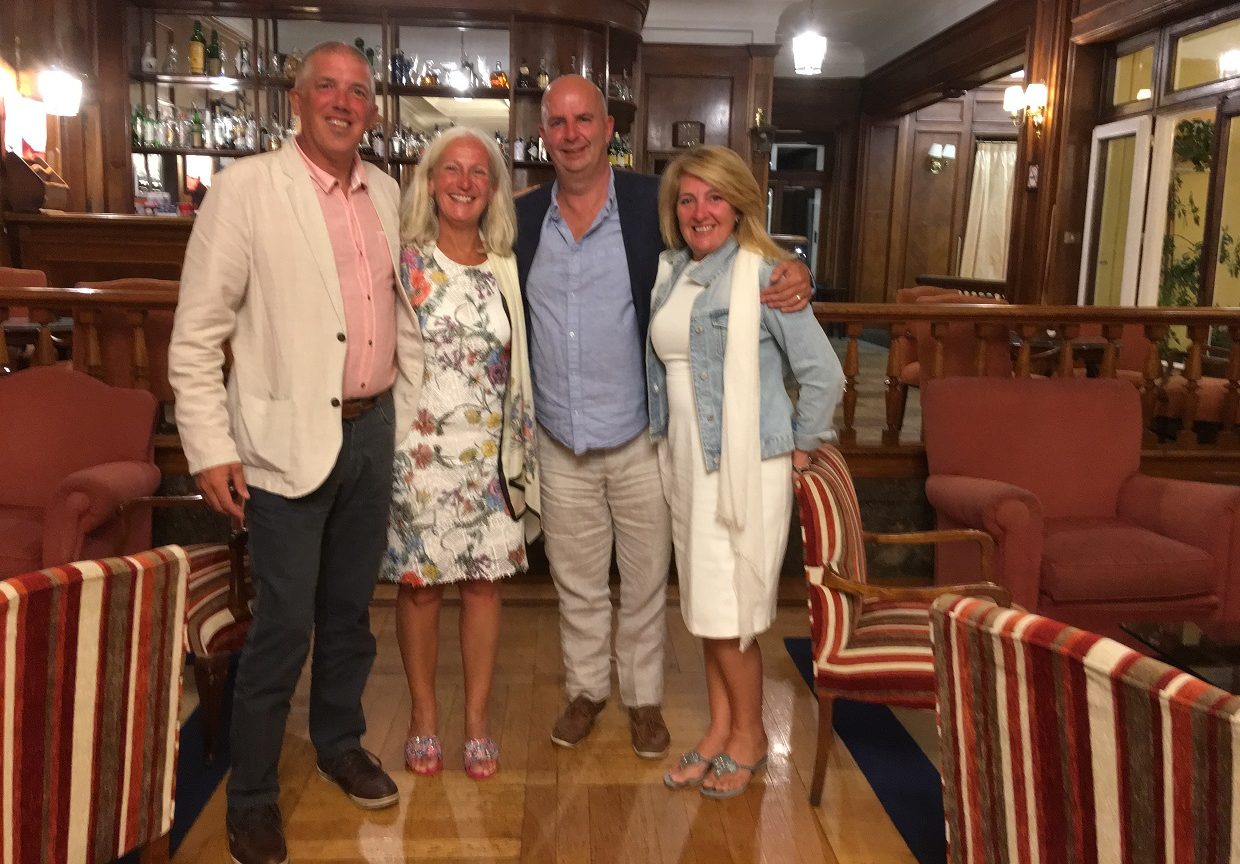 After a week we departed the marina – with the intention of returning later – to spend some time in the Rias around Coruna; first having to pass under the nose of the cruise liner! 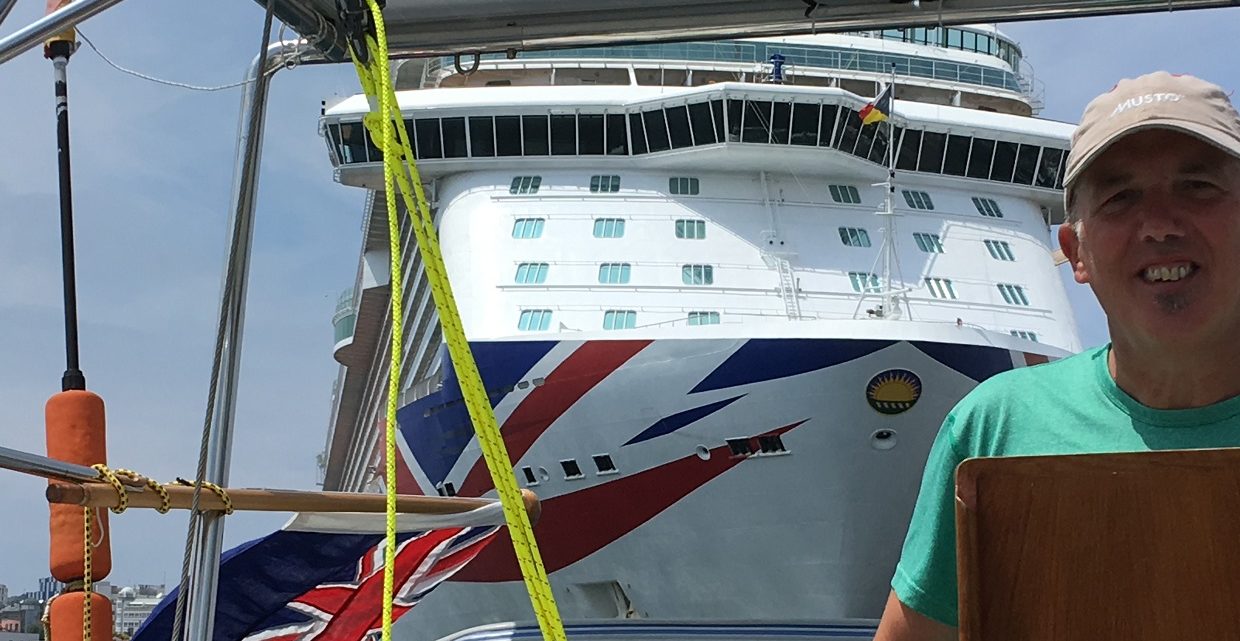