We weren’t going in here but plucked up some Dutch courage!

Our Irish friends from L’Aber Wrac’h had said we should go to Vannes, especially for Bastille Day (14th July). The marina sits behind a lock in a long canal-like stretch of water that runs right up the the gate of the ancient walled town – the Intra-Muros, with its mediaeval half-timbered houses and shops and amazing markets.

We were tempted, but the Morbihan (“small sea” in Breton) covers 50 square miles of relatively shallow water which empties and fills through a gap that is less than half a mile wide – and as it enters the tide sluices and boils in narrow channels between the many pretty islands in there. The tide runs at up to 9 knots through some of these channels during springs tides, and still maybe 5 or 6 knots at neaps. We had decided even before leaving home that we would not be going here!

We were tempted, but of course we weren’t going to expose ourselves to such stresses when there is so much to see elsewhere around here. But then Val was finally persuaded that Bastille Day in Vannes shouldn’t be missed, and navigator Paul was beaten into submission with the assistance of one Adam Bispham. Adam told Paul that he now had probably more experience than 80% of recreational sailors and should man up! And so he agreed, possibly under the influence of the red stuff!

The almanacs and pilot guides don’t give absolute chapter and verse on entering the Morbihan and reaching Vannes, but from reading through all of them and looking at online resources this is the plan that we came up with (note that much of this is aimed at scaring Paul’s mum and our kids, not intended in any way to inform others following us in!):

State of tide – we decided to enter 7 days before Bastille Day when the tidal coefficient was 66 and heading towards springs (neaps tides are down to around 45 and springs tides up at around 100, so we were around 40% of the way between springs and neaps). Had we entered the following Monday the coefficient would have been 77 and the tide would have been stronger – we may still have coped but preferred to prolong the stay in Vannes than to enter later and find out!

Timing – the entrance channel into Vannes has a depth below chart datum of 0.5m and on the day we wanted to enter low water was at 0.4m above chart datum, meaning that if we entered the channel at low water we would run aground in around 0.9m of water. Better to arrive when there is enough water but also when the tide is still rising in case you stray out of the deeper water channel and run aground – the rising tide will lift you off.

We worked out the time to enter with reference to the tide at Port Navalo which sits at the entrance to the Morbihan. High water at Vannes occurs around 2 hours after high water Port Navalo and there is around 11 nm to go once you pass Port Navalo. When you travel through the Morbihan, carried by its strong tide, you cannot simply slow the engine down and let the tide carry you as you will be swept onto the rocks – you need to keep motoring (locals with knowledge will sail, but not us) and we assumed that we might motor at 4-5 knots but average 6-8 knots with the assistance of the tide. So we might expect to take around 1.5+ hours to travel the 11 miles.  We calculated that if we entered the Morbihan around 1.5 hours before HW Port Navalo we would arrive around 1.5 to 2 hours before HW Vannes or just after that, when there would be sufficient water in the final approach channel to Vannes – and the lock would be open.

The Vannes marina sits inside lock gates which open roughly a couple of hours (or slightly more) either side of high tide during hours of operation (the times are published on their website).

On our selected day we entered the Morbihan at around 15.30 with HW Port Navalo around 17.00 and HW Vannes around 19.00 (times not quite exact but rounded for ease).

Tidal Height – we draw 1.95 metres and calculated that if we arrived at Vannes from 17.00 then we would have just enough water beneath us in the Vannes channel with around half a metre below the keel. Elsewhere on the route in there was never less than 2.2m or so below chart datum, and so at no point would we be in danger of running aground, as long as we kept on course, as there would be 2.6m here at low water and as we entered there would be comfortably over 3m here.

The route – our Imray Atlantic France pilot guide describes the route in good detail, and so we set waypoints on the chartplotter and built the route for the autopilot to follow. The first part of the pilot guide’s advice is that when you enter, passing Port Navalo, to steer on the “Gregan Tower”  – and continue to steer on Gregan until past the Mouton green starboard markers – don’t get too close to the Moutons or the strong tide could sweep you into the shallows! We carefully plotted the route taking this into account.

Well we survived the raging boiling tides, obviously, and here is how it all went:

Firstly we entered at said hour (15.30 ish) to find the tide running very swiftly. This photograph of one of the Moutons shows the tide ripping past it:

We held our course on the Gregan “Tower” – which turned out to be a stubby short thing, which confused us for a moment, especially as whilst our course over the ground headed at the stubby yellow and black thing, the nose was pointing at a tall white tower as we crabbed across the tide and we wondered for just a few moments what on earth the stubby yellow thing was!

Calypso’s autopilot (Dotty) coped with holding the line with continual adjustments. As we turned Dotty did a good job in what was now a very strong current (we had turned the response level to maximum) and we really didn’t get chance to get a good photograph of the boiling sea as we were spat through the channel at 11.5 knots, including a 7 knot helping tide. Here is a shot as it calmed down, where out of the tide rip the water is flat calm:

One of the hazards we read about was the amount of ferry traffic and fast speed boats – with the ferries expecting you to keep out of their way, whatever the rules of the road. We were fortunate that we did not encounter a ferry in any of the tight channels, but we did see a few, and we did stand on our course requiring one fast speedboat to divert around us when we should have moved (here the speed boat is off our starboard bow and we should have changed course but decided to feign ignorance!) 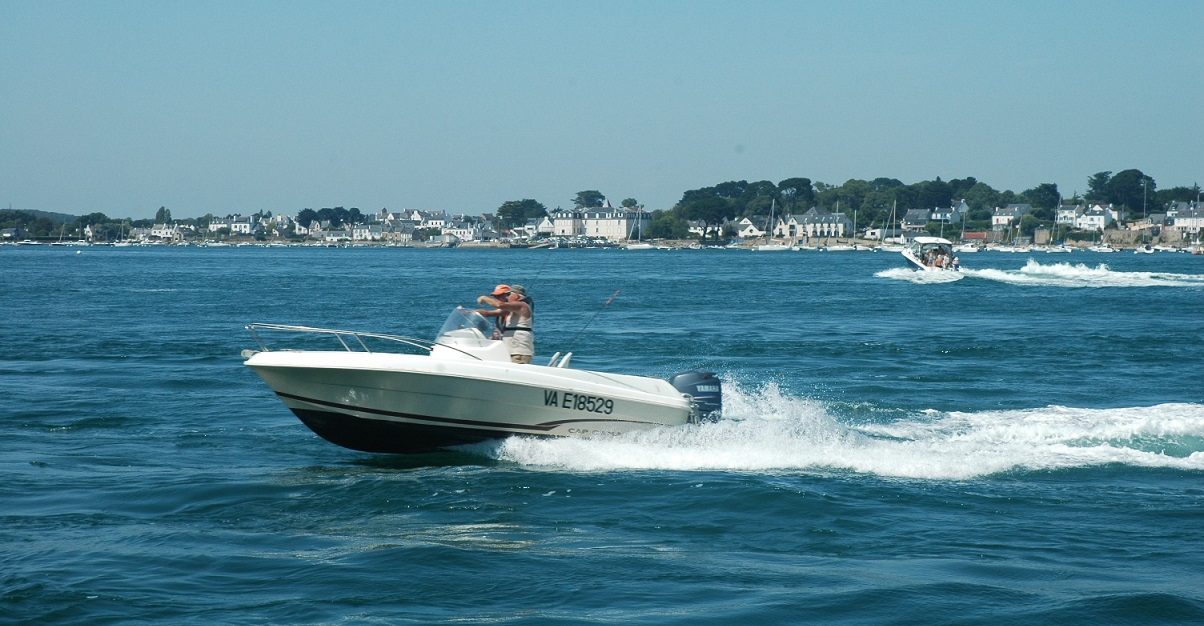 This was the first time we had built a waypoint to waypoint route using the new chartplotter (in fact we have never done it with any plotter before) and given how fast everything went at times and how much we were concentrating on following the route and checking off islands, buoys and depths (to ensure we were where the charplotter said we were) it was good that following the plotted route was so easy. Each time we approached a waypoint the plotter gave a warning beep and politely asked if we wished to change heading and continue to follow the route. A simple tap of the touchscreen and off went Dotty without further ado. We are so, so pleased that David at Hudson Marine Electronics persuaded us to have the plotter in the cockpit rather than our intention to place it at the chart table from where the old one was removed. Thanks Dave, great advice!

There were only a couple of times when we deviated from the route – once to avoid running down a poor chap fishing from his kayak – and once as the selected route ran straight through a bunch of mooring buoys and boats! Returning to the route involved just a few taps of the plotter’s touchscreen and Dotty obliged.

As we crossed the widest part of our route the tide slowed down to a couple of knots and so we dropped the throttle to tickover and drifted (but retained steerage) with the current to slow down progress – at this rate we would arrive too early. Around this time we were passed by Jack and Debi, the American couple on S/Y Iroquoise who we had met in Port Haliguen last night. They had entered slightly after us, but with less draft could perhaps afford to arrive slightly before:

The route programmed into the chart plotter ended as we neared Vannes and the channel narrowed significantly – we preferred to hand steer from here through the well buoyed channel. The long straight channel into Vannes is marked by a series of port and starboard markers, although with a slight cross current you need to keep an eye behind as well as forward to ensure that you are not pushed out of the channel.

We then went through the road swing bridge. We understand that this stays open when the lock gates are open in recent years, following the construction of a tunnel that takes traffic beneath the water. There are green lights signifying that access is permitted – but outward bound traffic takes priority. There is a waiting pontoon off to starboard (shown in the photo below), and whilst we had read a report that the depth is very shallow here, and that it may not be suitable, since arriving we have walked past when the lock and bridge were closed and witnessed yachts rafting on here. However for us the bridge was open, lights were green and we entered the canalised section of the channel up towards Vannes:

The canal was narrow and shallow – we got the depth prediction around spot on as we saw only around 40cm beneath the keel at times and went in on tickover and full concentration! 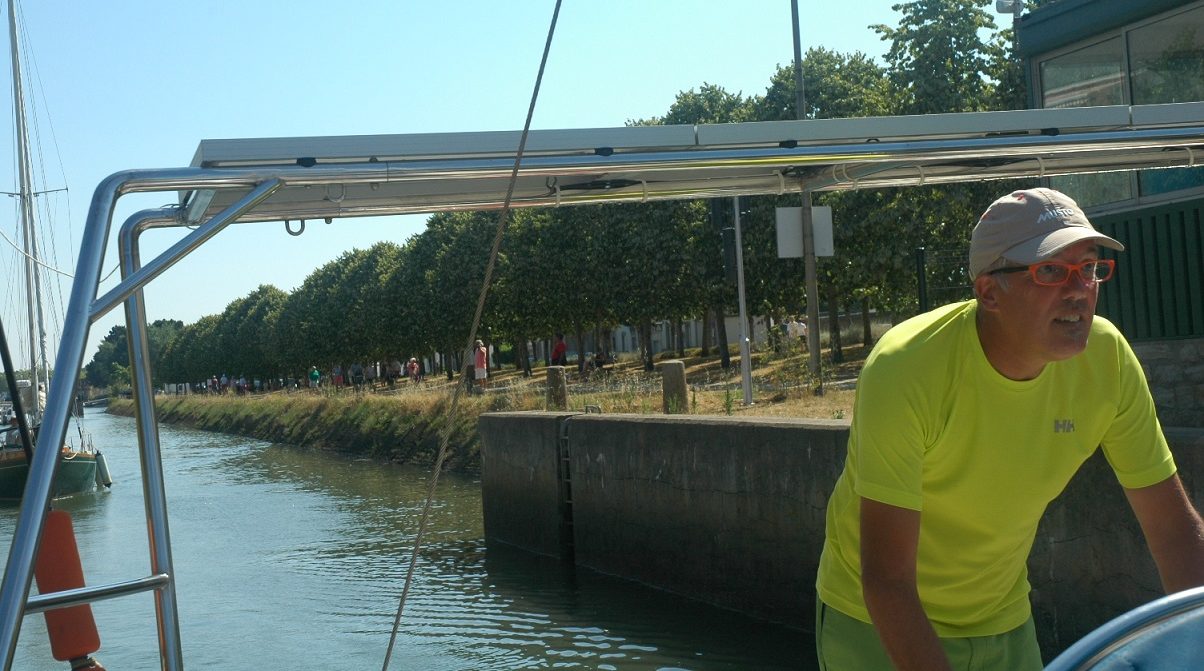 Through the lock and into Port De Plaisance de Vannes  we were met by a lovely girl in a dinghy who gave us a plan and told us where to berth. Visitor pontoons are alongside berths, in front of and opposite the new and clearly visible Capitainerie. You may be guided to a finger berth (“catway”) if available, but otherwise rafting on the alongside pontoons seems to be the norm.

Here is a photo of Calypso as we arrive – the lovely, lovely town of Vannes beyond is intentionally out of focus (according to Val) – you will have to wait for the next post for more of that! 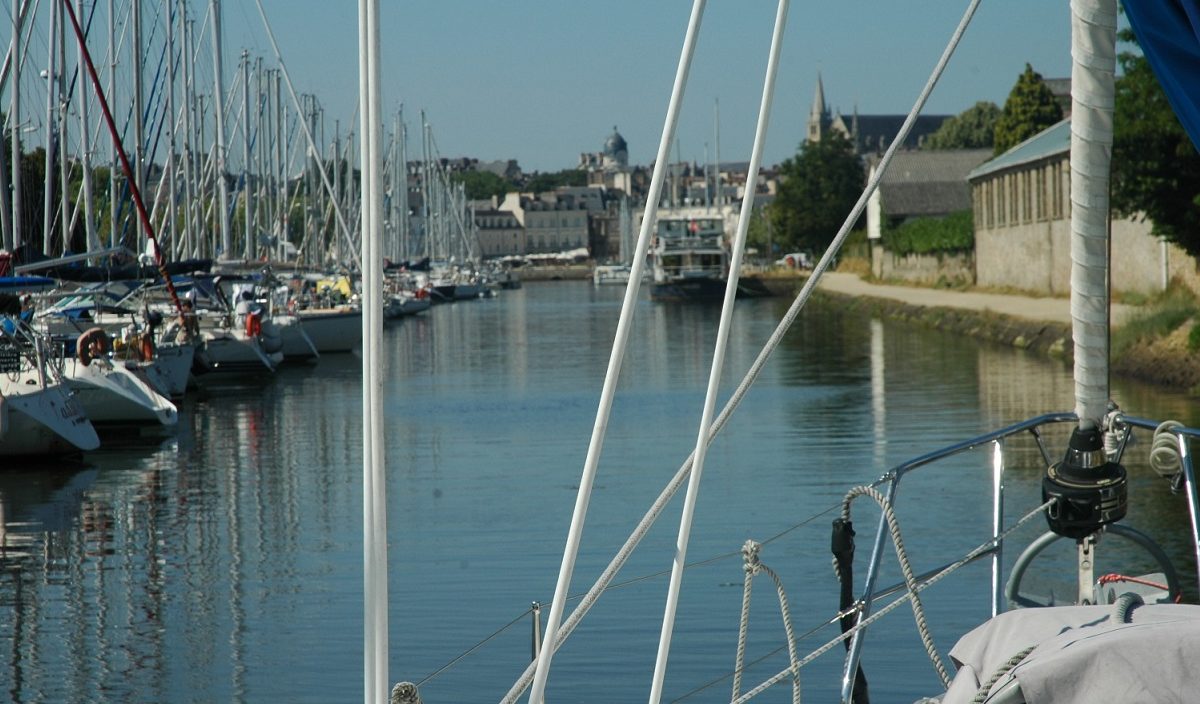