The old fishing village of Combarro is another tourist magnet and we had been looking forward to coming here and to staying at the modern marina, said to have the best showers in these parts.

The approach to the marina looks very shallow on the charts, something that just a few years ago would have made us rather nervous, but we had read that there is always sufficient water in the approach, and as we confidently motored across the stretch at near low water we found that to be true. That said, Cautious Kevin set waypoints at the start of the shallow area and outside the marina to let the autopilot guide us across the deepest area available!

We radioed in on channel 9 and were met by a marinero who helped us to tie up. This is the norm around here – seen rarely in the UK, where you are usually given a pontoon and berth number and help yourself. The marina was indeed very modern and housed some expensive yachts. We saw as many British boats here as we had seen so far all season, and the outside of the visitors pontoon was awash with million pound yachts from a few large new Hallberg Rassys to a Discovery 55.

These are all very lovely, but we told ourselves that they wouldn’t have got into some of the marinas we have been to!

The shower facilities were, indeed lovely, and the bar outside the marina building on it’s platform above the water was a very nice place to enjoy people watching.

The cost for up to 12m is 40 euro, but as members of the Cruising Association we had a 25% discount and paid 90 euro for our 3 night stay. Marina manager Maria was very helpful and spoke good English.

Whilst we had intended to arrive here early we hadn’t set an alarm clock and woke up late, eventually raising anchor at 11.30 and after a trip of 4 nm tying up and switching off the engine at 12.40.

After chatting to Maria and settling in we went to explore.

The old town is relatively small, just a few streets, and built on a granite outcrop, with that being clearly apparent in places. The buildings are mostly well preserved and intact (ie not too many modern additions externally), and in the back streets one could get a good feel for how life might have been back in the day….

However the front street, being the most characterful part of the village, whilst retaining the original buildings had lost some of its character. The many restaurants were mostly quite tastefully created, but the shops…………………..the shops – were simply DREADFUL!!!!

They all sold absolute sh….te! Fridge magnets, 1 euro bracelets, resin wall plaques of anchors……and witches, everywhere witches! There must have been 15 shops in the old village, mostly on the front street, and not one sold anything other than this rubbish. WHO buys it?? It is not just here in Galicia that we have witnessed this phenomenon of ruining the ambience of a stunniing old place with plastic crap adorning historic shop frontages, the French have a love of it too. There must be at least as many shops of plastic crap on the walk up the otherwise wonderful Mont St Michel in France. Rant over.

Beyond the far end of this street of tat we found a small bar overlooking the sea and along the main attraction of the horreos and fishermen’s houses above the beach. We had a quiet beer, before heading uphill and buying dinner at the supermarket.

On the second day we got up earlier and put on our walking shoes. We went to the tourist office (in the old village) and got a map. We also enquired whether the Monastery at Poio would be open. Val had read about this and wanted to visit, but the website suggested it might be closed. It was fortunate that we asked because they said that it is open and gave us a map of the area.

We planned our route in the tourist office – back through the front street to see if it felt better with fewer tourists around (it did, but the sh…te was in the process of being hung out), then around the bay, up a stream with more of the watermills we had seen in Moana and up to the Monastery, then back to the sea front path that the tourist office promised would be a good walk – but were we sure we could manage all that in a day?? We said we were younger than we look and they laughed, wishing us “bien viaje” – good trip.

We headed back to the town square and over the granite outcrop at the start of the front street – from where we could see that the clam pickers were out in force on the beach (see photograph below).

Part way along  the street is an old quay, now taken over by a couple of restaurants, each with a wood barbecue oven and a pile of logs on the quayside. 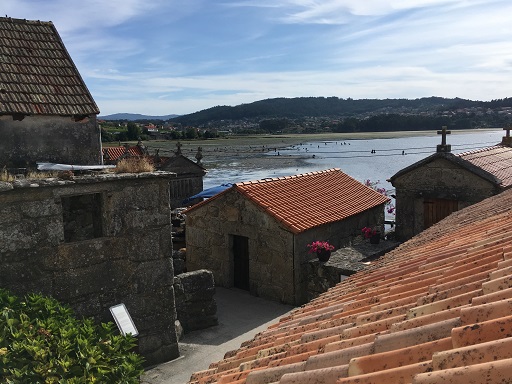 We walked along the beach as far as we could, but it got very soft and muddy and so we turned back and walked along the main road for half a mile or so (the only part of this walk that wasn’t delightful, but which still had a good view back to the town as seen in the photo). 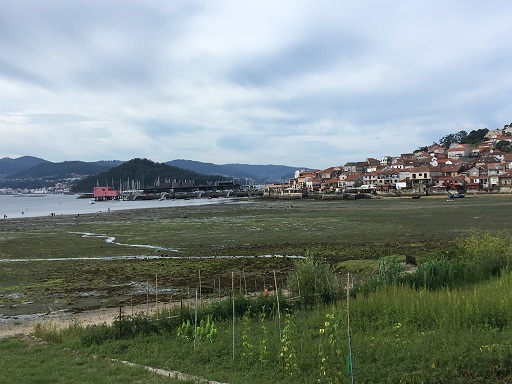 We then dropped down into a recreation area and followed an old couple who were walking home after an early morning clamming session.

The large park area also housed a sports field, a circle of stone sculptures and a bar.

At the far end of the park a stream crossed the path and fell into the sea. A sign pointed upstream to the old water mills. we saw three at the beginning but after scrambling up a rocky outcrop we never saw another ; maybe we took a wrong turn.

The map provided by the tourist info office was just not right, but we passed through a lovely area with old houses and various allotments, and whilst clearly not on the right path for the mills we eventually got back towards the monastery with the help of a map on the phone! We could eventually see the monastery in the distance – it was huge!

However the only parts open to the public, for the princely sum of 2 euro, would be the church, two different cloisters, a sculpture exhibition in the old refectory and a museum. 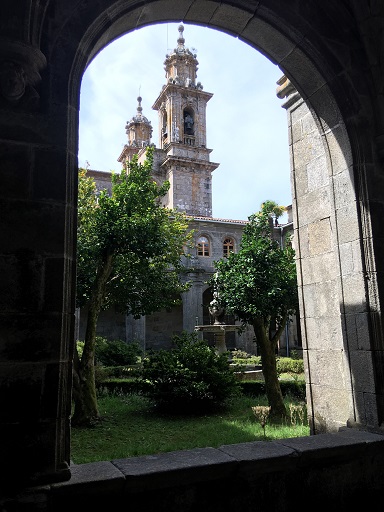 Val had read that the sculptures and carvings at the monastery were particularly good, and so they turned out to be.

In the church were many extremely well carved effigies and some biblical scenes carved or cast in bas-relief. We would like to show more, but this is a sailing blog and you’ll just have to take our word for it, but this really was some of the best work we have seen 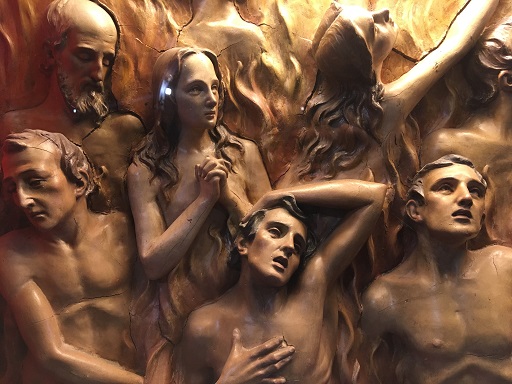 The sculpture gallery in the old refectory displayed relatively modern work right into the 21st century, showing that the monks still have the same appreciation of art as their predecessors.

In the second cloistered area was a mosaic, extending around all sides and depicting scenes from the French Way of the Camino de Santiago. From memory this was commissioned in the 1980’s or 90’s. And after that was a small museum, all included in the amazing entry fee of 2 euro.

We did add to that with our usual habit of paying to light candles and sitting in silence to remember absent friends.

At the end of the tour we saw the longest (or largest?) horreo in Galicia – clearly there would have been an awful lot of monks here!

As we went to the cafe for lunch we found it closed – perhaps what we had seen on the website! Thank goodness the tourist office set us straight as this was a truly memorable place, and peaceful – which we shared with maybe 10 other visitors that morning.

We think that the main accommodation block, huge as it is, is possibly now used as a care home and/or hotel/hostel? We assume there will still be a few monks around here?? 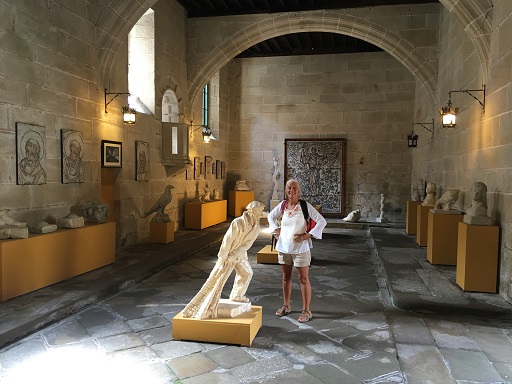 We walked back and found the recreation area a little more easily than we had found the monastery, and then headed out along the excellent shoreline path that had been recently upgraded and would be suitable for a bike ride.

We followed this for a few miles of ever changing scenery, including past some lovely old waterfront houses, a small fishing port and a few nice beaches.

The lady at tourist info had said that there are a few restaurants at Lourido.

We had passed a few beach bar/reastaurants and there was not much at Lourido other than the three restaurants. We chose the least pre-possessing – and after a superb 3 courses with wine, water and tea for 10 euro each we were glad we chose it. We normally give the 10 euro (or less) menus a miss as it is often stodgy, but this was good seafood and we could see why it was packed, when the two fancier looking restaurants were fairly empty! 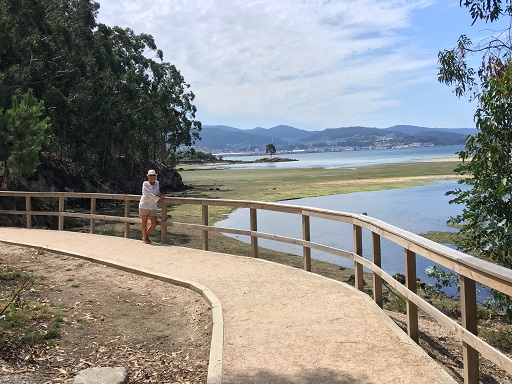 When we arrived back in Combarro we think we had walked about 9 miles. Fortunately much of it was relatively flat and we still managed to scramble along the narrow ledge in front of the horreos, now that the tide was back in!

On our third day we had a lazy one; other than going to the laundry at the top end of town and filling our shopping trolley with provisions at the supermarket nearby, we lazed at the boat, blogging reading and scrap-booking.

We couldn’t raise the enthusiasm to go to one of the front street restaurants as planned – blaming the nearby tacky shops for that lack of enthusiasm, but with hindsight – maybe we are not as young as we claimed at the tourist office! 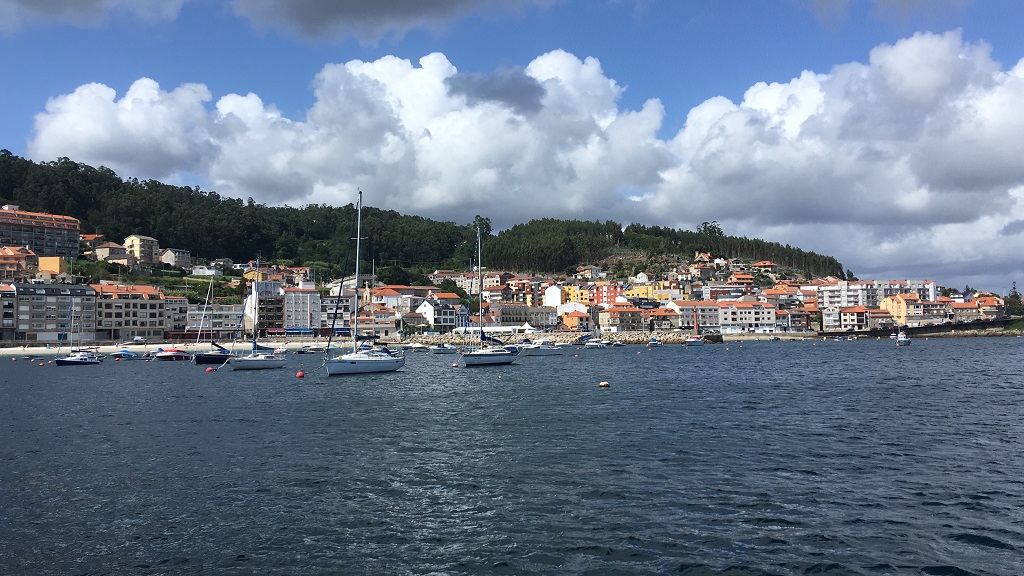 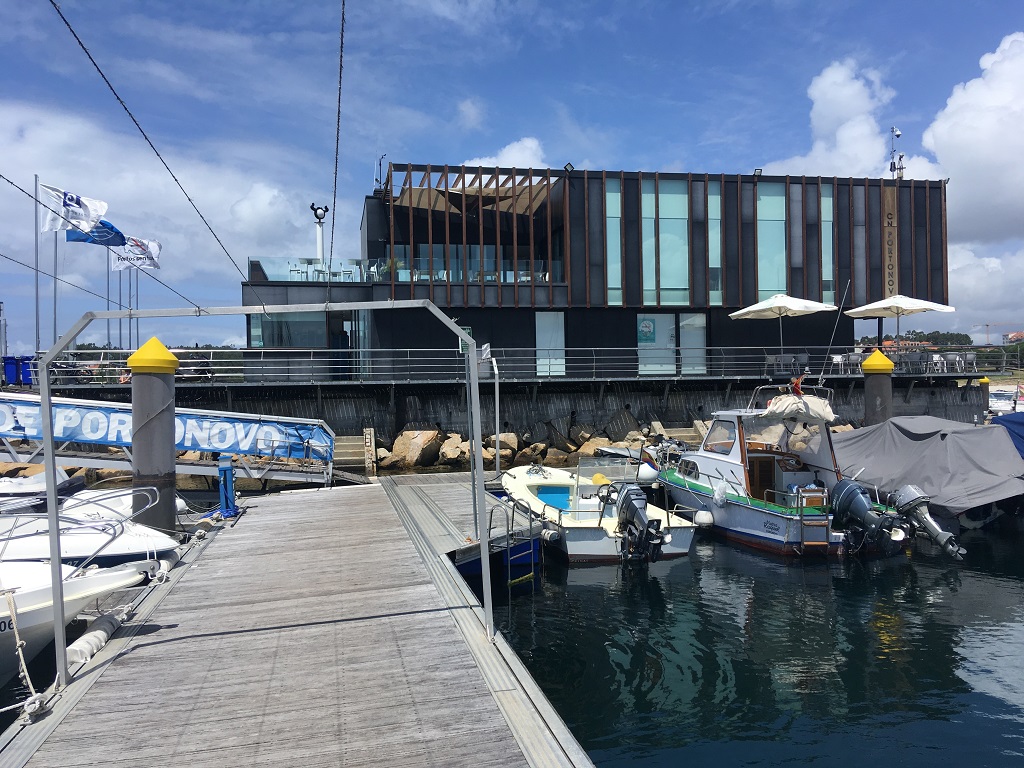 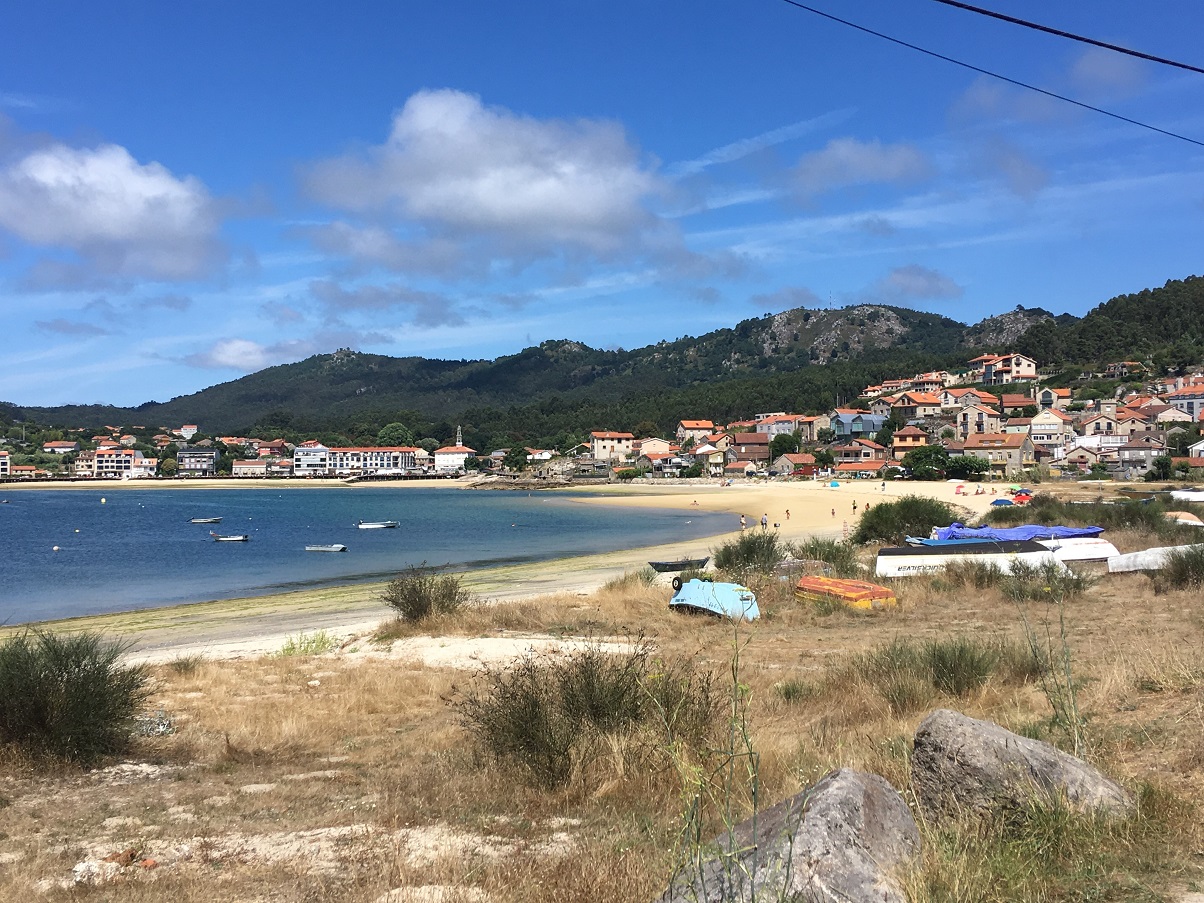