After our very brief stay in Ensenada de Barra we headed in to the big city of the Rias Baixas. Adam had to fly home for a few days and we went to keep Lynne company. Well, that was our excuse for a bit of city living. 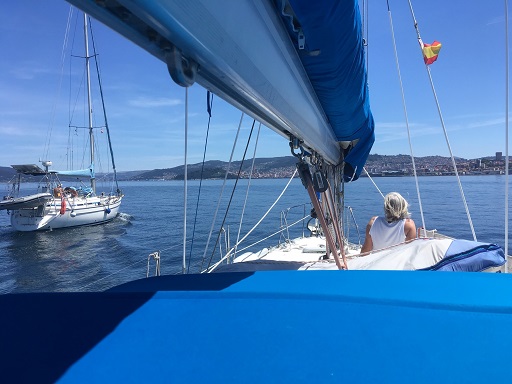 The wind was from the East as we motored the 7nm East to Vigo with Charisma. We are accustomed to falling well behind in such circumstances, but today we motored easily alongside Charisma, and as the marina neared we plotted to overtake them to make sure we got the best berth.

Fortunately our dirty trick was unnecessary as Adam suggested we head in first as they wanted the fuel pontoon!

The city has a population of around 300,000, and as with most Spanish cities, high rise living predominates. Sharing the skyline with the towering blocks of apartments were the huge cranes of the extensive dock area, looking like giant sculptures.

We had selected the marina of the Real Club Nautico, right in the heart of the city. It would be handy for Adam’s transport connection,

handy for the city centre (especially the old part) and as an added bonus a berth in the marina comes with free access to the leisure complex – full size pool with gym and sauna.

The leisure complex sits alongside the club house – a large art deco building in the style of a small cruise ship of that era. We would also have reasonable wi-fi on the pontoon (good by marina standards) and access to the restaurant and bars of the club. Given the facilities available to us the cost (after CA discount) was a very reasonable 26.67 euro a night or £182 euro a week.

We had radioed in on arrival on Sunday around 1.30pm and a marinero came out in his rib to guide us in to our berth, inside the outer breakwater near the fuel pontoon. It was relatively calm in there with just a slight roll now and again as the Cangas ferry left from nearby. We never had much swell even as the wind blew harder. 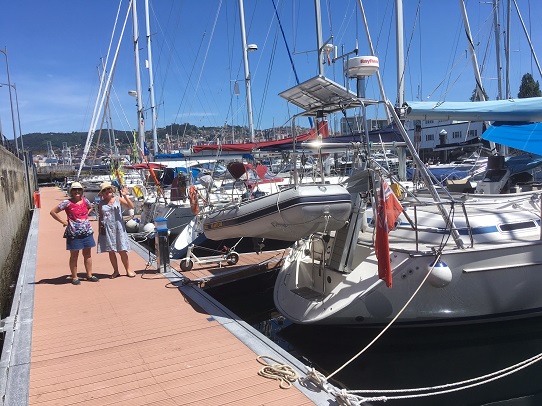 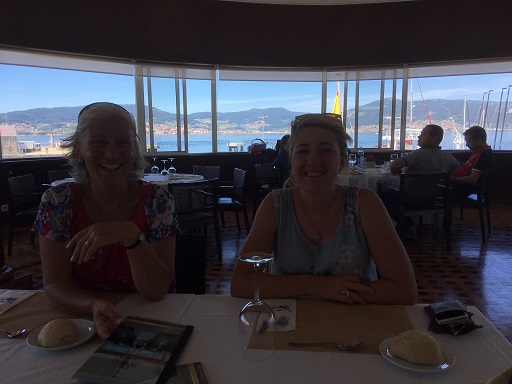 After tying up the boats we went to the club’s restaurant for a late lunch. The menu del dia (3 courses plus glass of wine, water and coffee/tea) was 17euro at the weekend (12 euro midweek) and proved to be very good value and taken in very nice surroundings, with panoramic 108* views over the ria.

As we entered a rather elegant Spanish lady, taking the opportunity to exercise her very good English, recommended the cod main course. We all took the recommendation which was a good one!

There are two toilet/shower blocks available for visitors. One is in the club’s storage/utility building which seemed to be open at all times but where the showers were cold on the two occasions we tried to use them.

We tended to have a swim in the pool and shower afterwards, this being open for long hours. On one occasion we went for a swim with Adam and Lynne and there were only the four of us in the pool.

The pool was very well used, however, and was usually full of noisy kids having swimming lessons, practising synchronied swimming routines or playing water polo (when there would be a couple of lanes reserved for members and marina visitors). 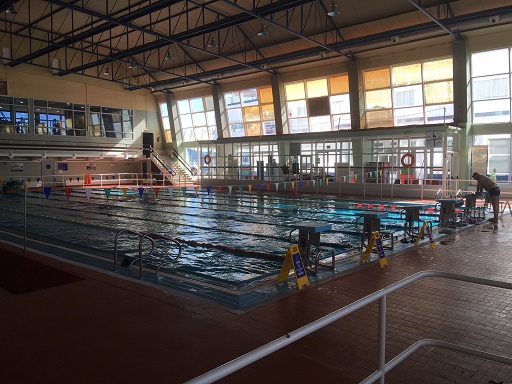 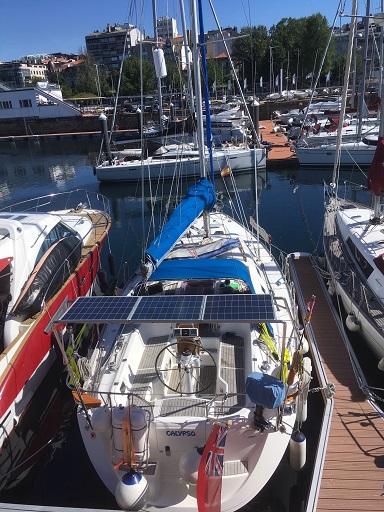 We had a good view of the city from our berth as can be seen. However this photograph was taken from the harbour wall along which people perambulated. At high tide we were quite close to the level of the promenade and so not only at those times were we on full close up display, the security access onto the pontoons was in reality of little effect!

The area was quiet on most evenings except at the weekend, when there was a degree of noise from the very late night revelers. That was when the high tide loss of security felt slightly perturbing – although the only notable incident was when Paul witnessed a very young couple getting very fruity on the railings as he went for a late night pee!

From this part of the promenade regular ferries run – 3 an hour to Cangas and apparently to Moanna. In season a ferry runs to Islas Cies for those not wanting to visit with their own boat (or who have not managed to get the permit needed to anchor there – we obtained ours over the winter).

Whilst Vigo was not dissimilar in terms of population size to La Corunna it is not somewhere we would recommend as a weekend break destination (as we would of La Corunna).

The tourist office advised that there were several centres, and whilst we were at the main centre we had already felt that this was not as impressive as we had expected – there was no large public square, no big market and to prove the point the El Corte Ingles (department store) was quite small!

There were many impressive single buildings and sculptures, but it just lacked……..something.

Unlike Corunna there is no beach in the centre and no amazing seafront areas. That is not to say that we did not like the place – we did. Just not as much as we had expected.

The marina was certainly an improvement if only for the lack of interminable swell that affects those in Corunna. 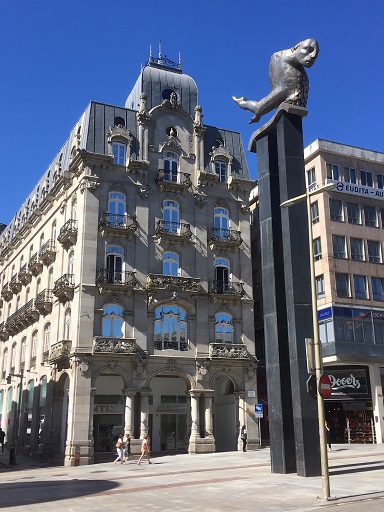 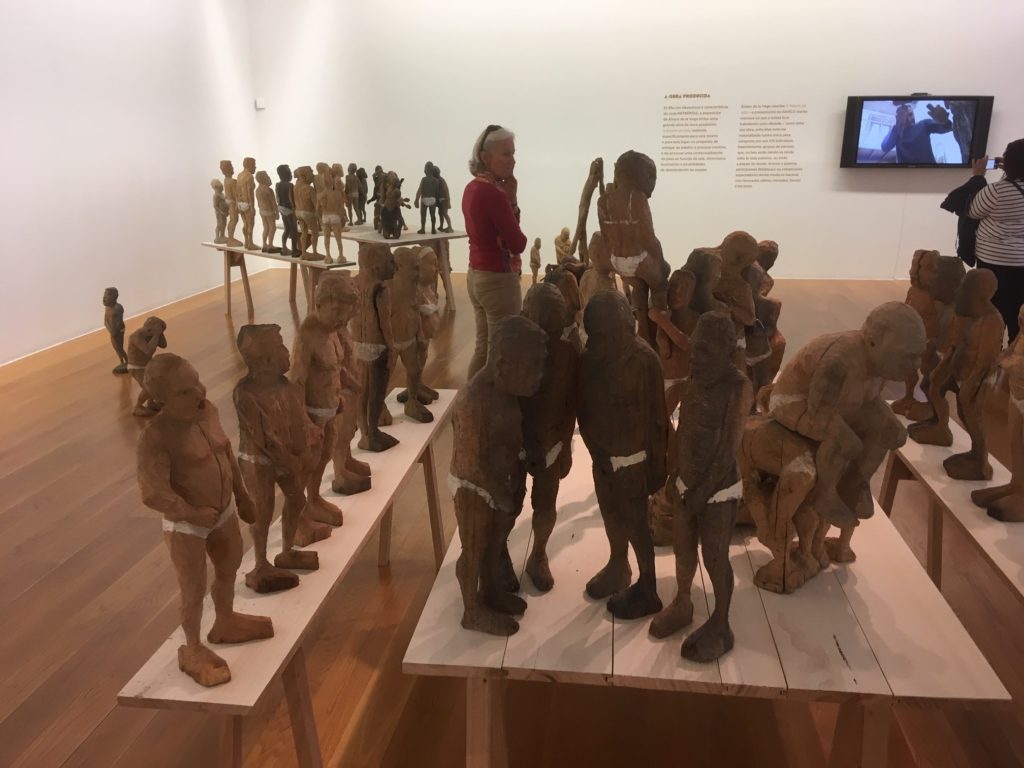 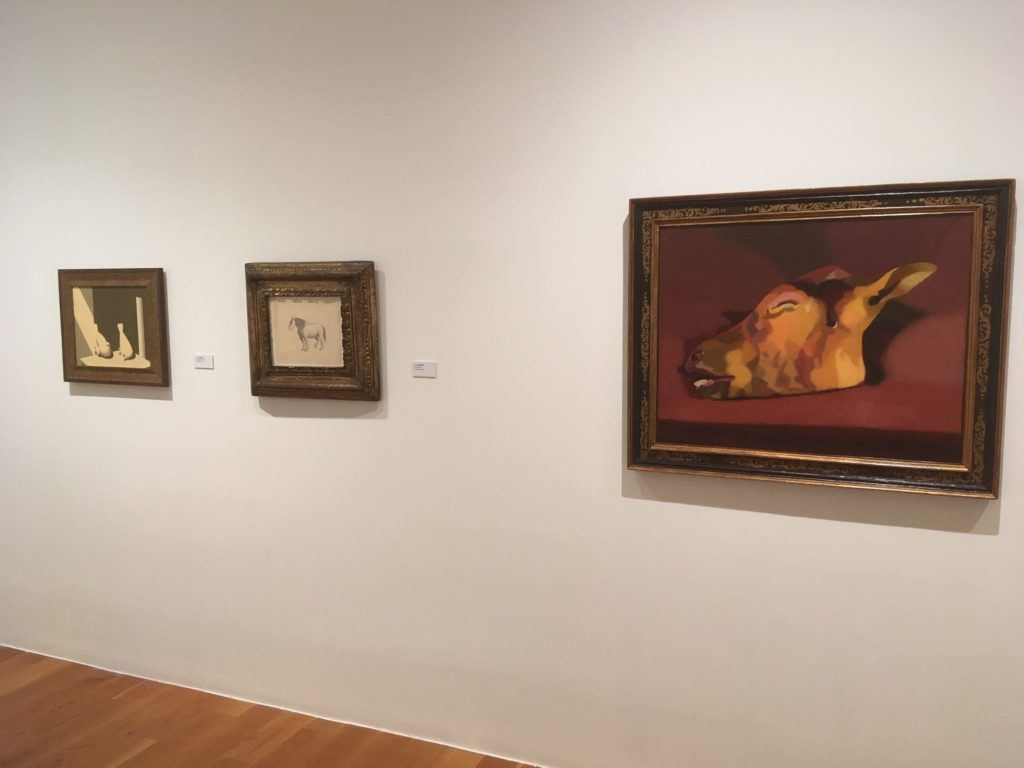 There are plenty of shops – the photo shows the main pedestrianised shopping street. We both managed to expand our wardrobes significantly whilst here. Val found an up-market gown shop closing down and Paul had to settle for 3 new pairs of linen trousers from C&A (remember them??)

Also on the main shopping street was a superb art gallery. We had walked past it a few times before venturing in. The space itself is amazing but the first two galleries were a bit disappointing.

After those though the exhibitions improved no end. There were several Picassos and works by other notable artists and a good deal of canvas art dating from the seventeenth century to date.

This is a small part of the extensive exhibition of work by sculptor Alvaro de la Vega which was just fascinating.

We caught a bus and went to Pazo de Castrelos, a grand house sitting in extensive gardens within a large area of parkland. It houses the museum of Quinones de Leon, named after the family who gifted it to the city of Vigo around 90 years ago.

The gardens were said to be extensive and interesting. Maybe we have been spoiled by our recent trip to Kew Gardens, but we soon regretted arriving 2 hours before the museum opened and ended up having a siesta on a bench in a quiet corner beneath a tree!

That may be a little unfair, but there is certainly not 2 hours worth of attraction to the garden, which felt as though the staff was at least one gardener short!

The orange trees were heavily laden and surprisingly not picked even at the reachable height. The first segment made it clear why – these were the most bitter of oranges – and so we picked a few and made a good kilo of marmalade. Surprisingly good for our first ever attempt – and at two and a half hours cooking time is another plus point for our decision to buy the induction hob!

The house was certainly worth a visit, an interesting building, lots of old works of art and a small museum. And free entry, even better! 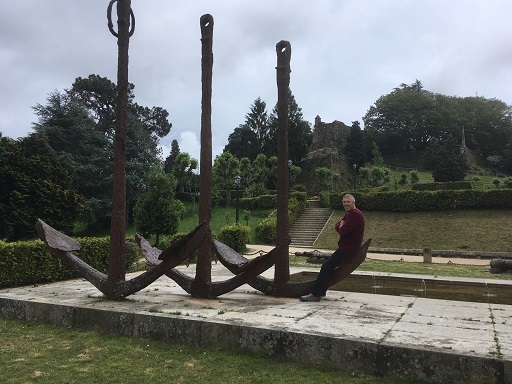 On another day we walked up through the old town to visit the castle towering above the city. The first part we reached had intact walls to perhaps half of the original site with a 1970’s monstrosity of a council office block on the other half!

Skirting around this and across a busy road then led to a very steep climb to the upper fortified area.

Val insisted that Paul posed for this picture part way up – no prizes for guessing how many big anchors can be seen!

The climb was nose bleed and burning thigh inducing, but the view from the top was worth the effort.

The port area of Bouzas can be seen from this photograph, with the Islas Cies on the horizon – part of a natural defence against Atlantic swells which keep the sea state in the Rias Baixas calmer than would otherwise be the case.

Middle left can be seen a luxury cruise liner under construction. When we took a taxi to Bouzas on the Sunday for street market and lunch (with Adam and Lynne) the driver told us that this had once been a major ship-building port which was now in decline, although we did see ships under construction in a couple of other yards. 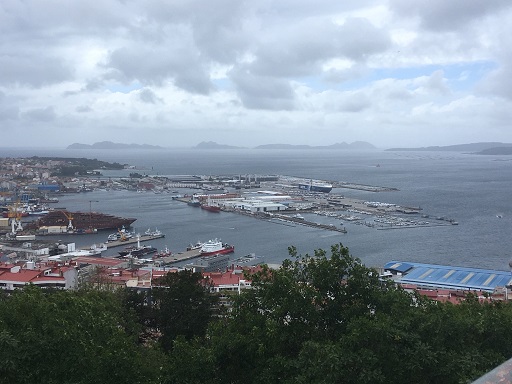 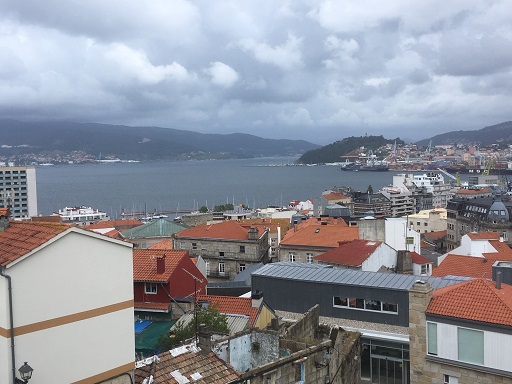 This photograph looks East across the rooftops of Vigo, with Real Club Nautico Vigo marina just visible at the lower water edge.

As is evident from the photo’s we had a few cloudy days to end our time in Vigo – 9 nights in the end – but Paul was quite happy with the overcast weather as he was by now shedding his skin like a snake after foolishly braving the sun on the way across from Bare Arse Bay!

On our last morning we did a few boat jobs, bought food for our intended 2 nights at anchor and went for a final swim.

Val also wanted to visit the narrow street in the old town (leading off the main square) which was home to basket-makers.

Paul’s comment that all of the baskets would now be imported from China was perfectly timed – around 10 seconds before we reached the doorway where a very Spanish looking chap was weaving a basket.

“Harumph – just for show” said the miserable one! 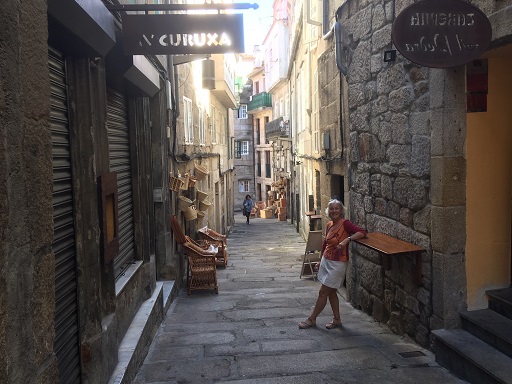 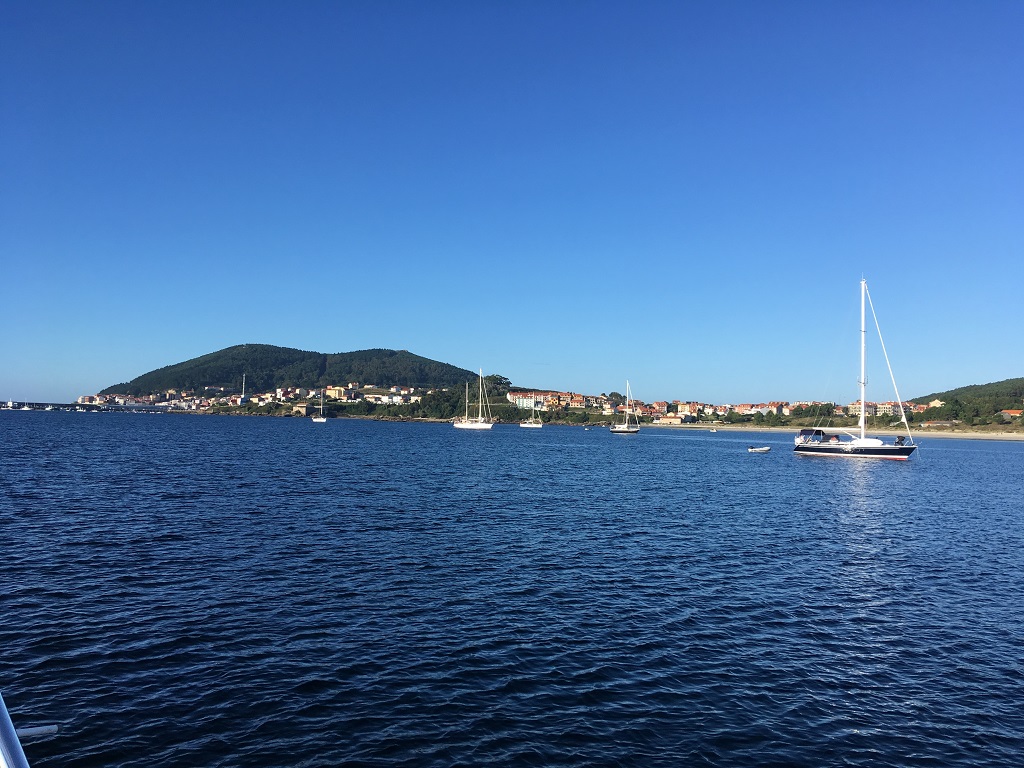 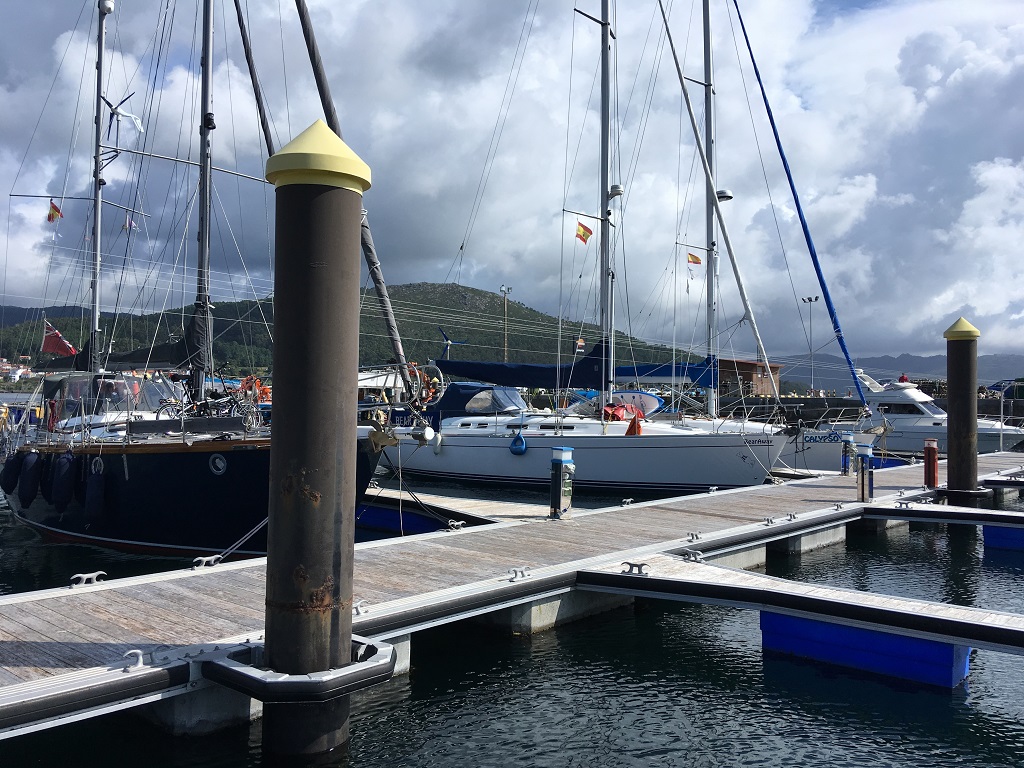 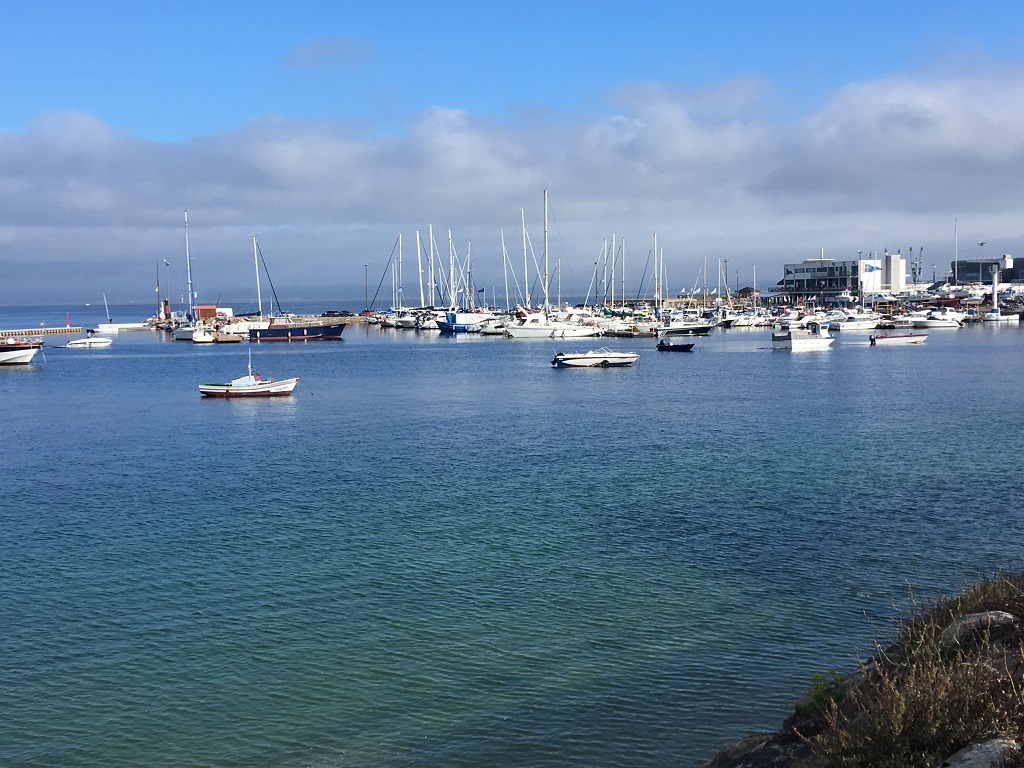 2 thoughts on “City Break In Vigo”