Whilst waiting in Aviles for an opportunity to head West we hired a car and took the opportunity to visit rugged Asturias; in part a vast wilderness, home to wolves, vultures, mountain cats and the last  population of brown bears in Western Europe. In this mountainous area the Roman advance across the Iberian peninsula was slowed, and it required Emperor Augustus and 70,000 legionnaires to conquer the region.

The impressive Roman Bridge at Cangas de Onis is a reminder of their hard won victory. However there was no way that the Romans could build their trademark arrow straight roads in this area! 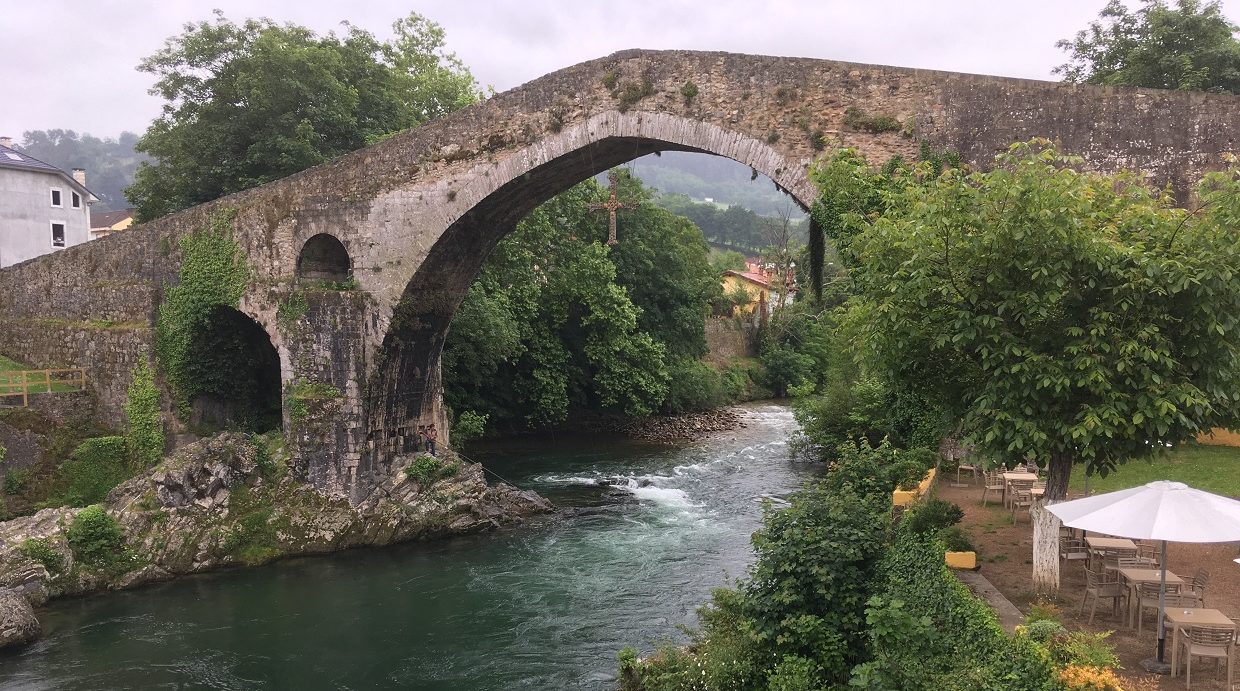 On our first day we went to the Hotel La Balsa (at Soto de Cangas) via a few small towns recommended by the tourism office in Aviles. It was a grey day but less damp than we had feared. We arrived at our hotel in the foothills of the Picos De Europa with the intention of visiting the lakes in the Picos de Europa national park. The view from the hotel window was promising: 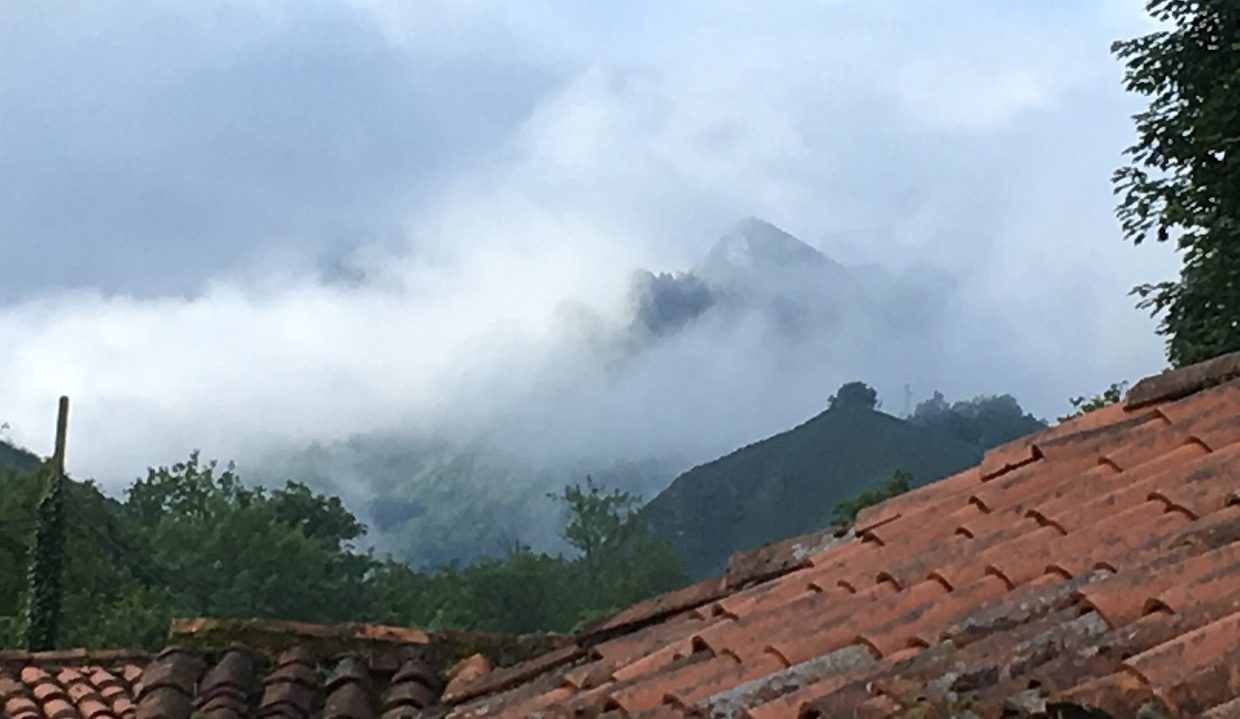 Our hotel was very comfortable, the breakfast was excellent, and amazing value at 45 euros including breakfast! The hotel recommended an excellent local restaurant. Before arriving we had read that Los Ramos served excellent meat, and Paul had an entrecote that staved off his hunger for the rest of the trip!

The next day was forecast to be the one day on the trip when the sun would appear, and indeed the day dawned brighter and warmer.

We had seen in the tourist office that en route to the Lakes we would pass by some form of religious building, although had no idea of the significance of the site. Apparently the region was the last bastion of Christianity in Spain during the Moorish conquests in the 8th century. In the battle of Cavadonga the Moors suffered their first defeat. During the battle the Spanish leader and his men took refuge here – possibly in the cave which is now a shrine. A monastery was built at the site and more recently (120-150 years ago) the pink sandstone basilica (looking a bit grey here) was constructed on a rocky outcrop.

We entered a tunnel  to the cave and sat through part of a service in the shrine: 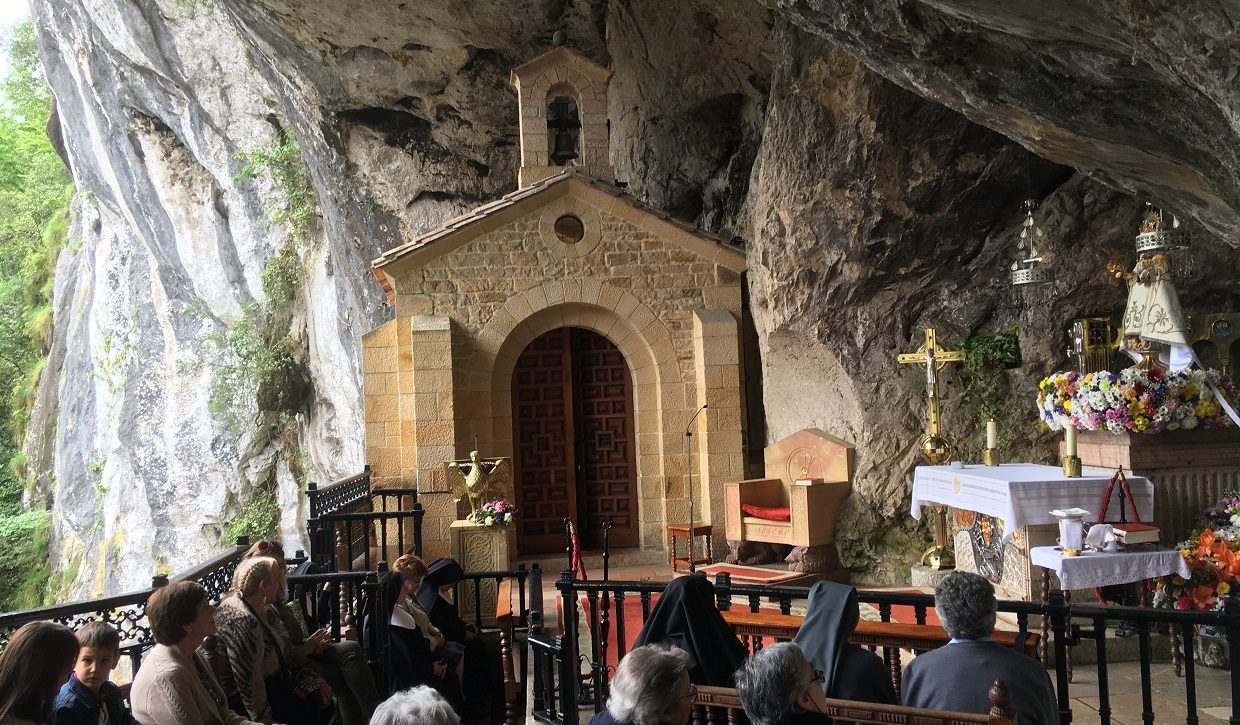 The cave sits high above a spring fed pond below. Apparently a woman drinking from the spring will get married within the year. Paul threatened to fill a bottle for Val……. The site is breathtaking – and fortunately, being close to our hotel, we arrived before the hoards. It was already  getting busy before 4 more coachloads arrived just as we were departing. Also arriving as we departed was a VIP visitor, complete with blacked out limos and security guards (either that or they were wearing hearing aids!) He looks familiar – an African leader? Answers please.

Having spent a good couple of hours here it was time to move on. Unfortunately the road to the lakes was closed – maybe a landslip? On route to our next hotel we came across a huge landslip with a new single track dirt road having been built to take traffic whilst a major civil engineering project was underway! There were lots of loose stones and small boulders in the side of some of the main roads, so clearly something of a regular occurrence in these parts.

We had chosen a long and windy road (single track in parts, badly surfaced here and there) through the Redes national park to get to our next hotel, through amazing countryside. The two villages below faced each other across a steep sided valley – the area took us both back to the story of Heidi, and we wondered whether the villagers yodel at each other across the valley? 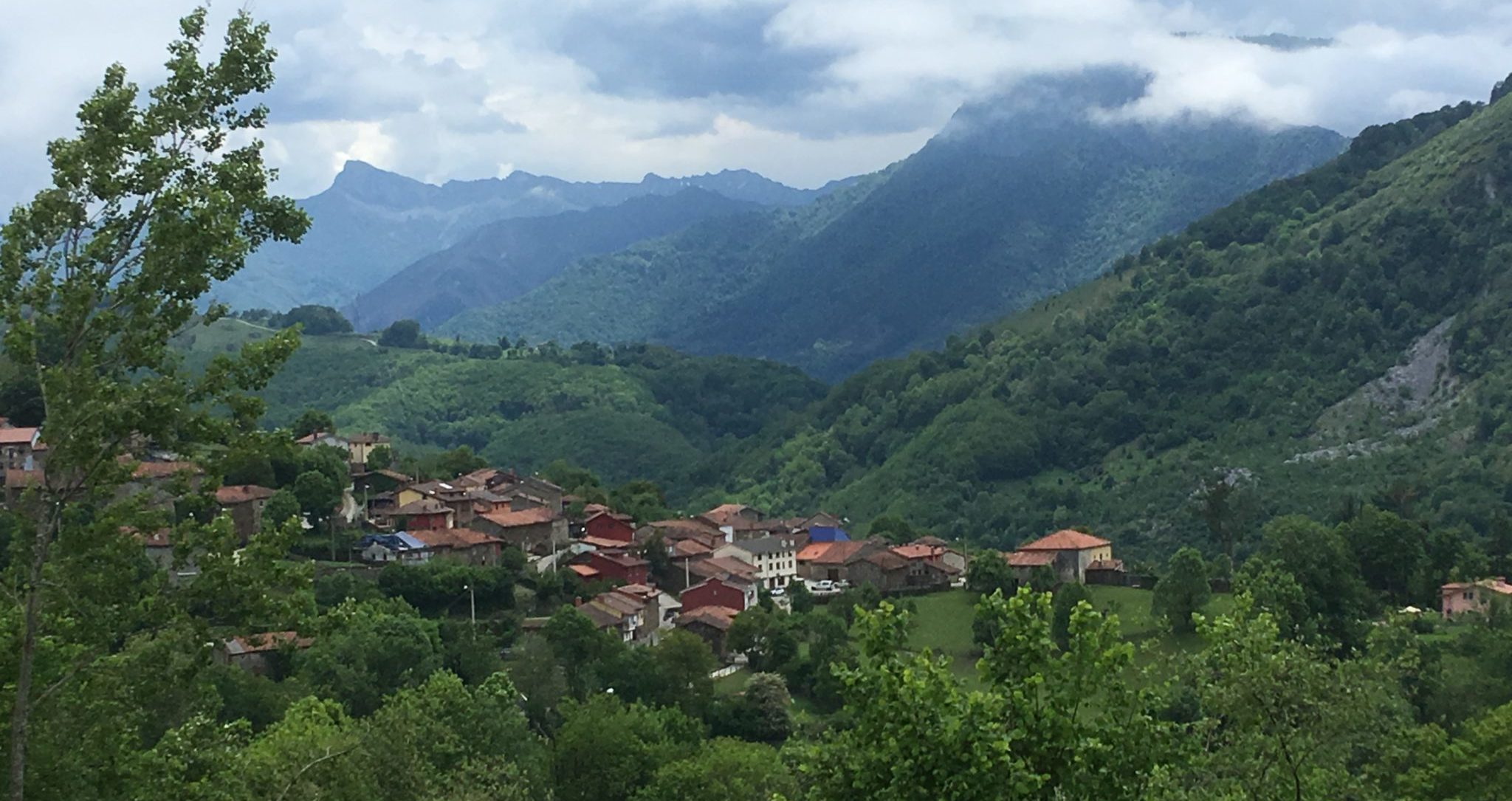 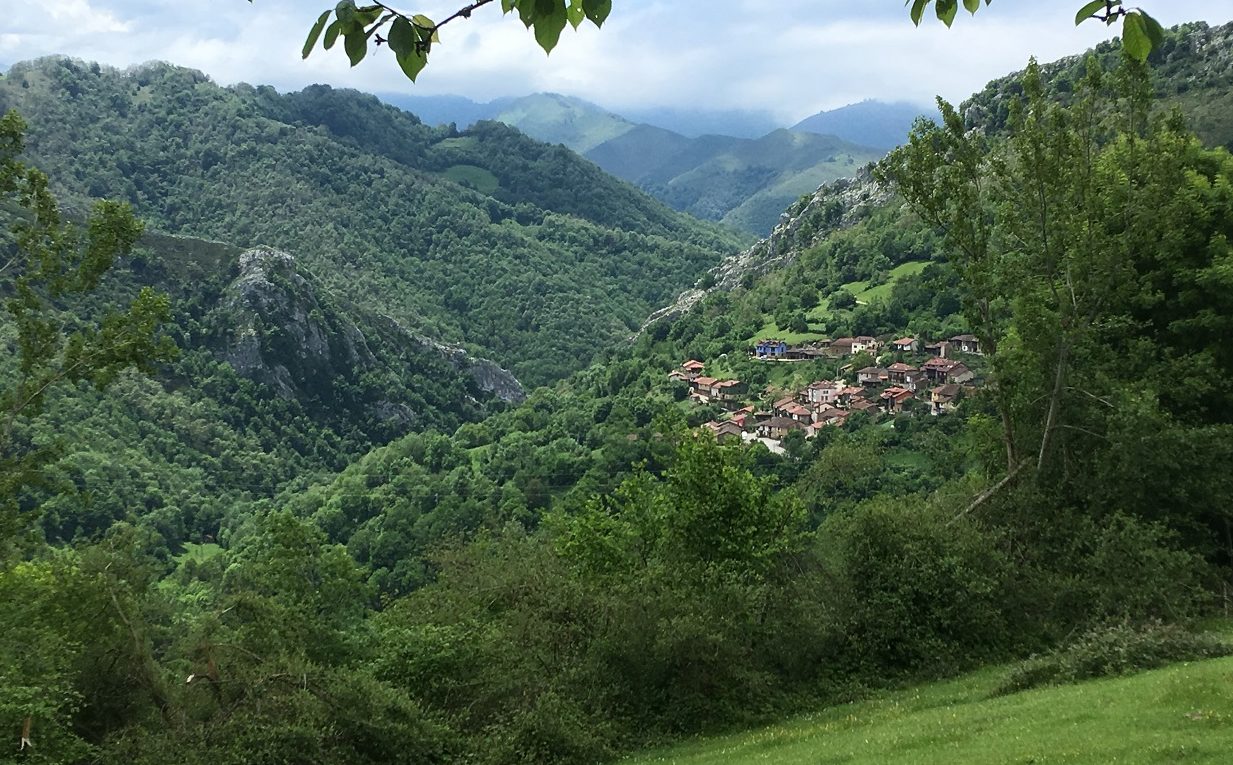 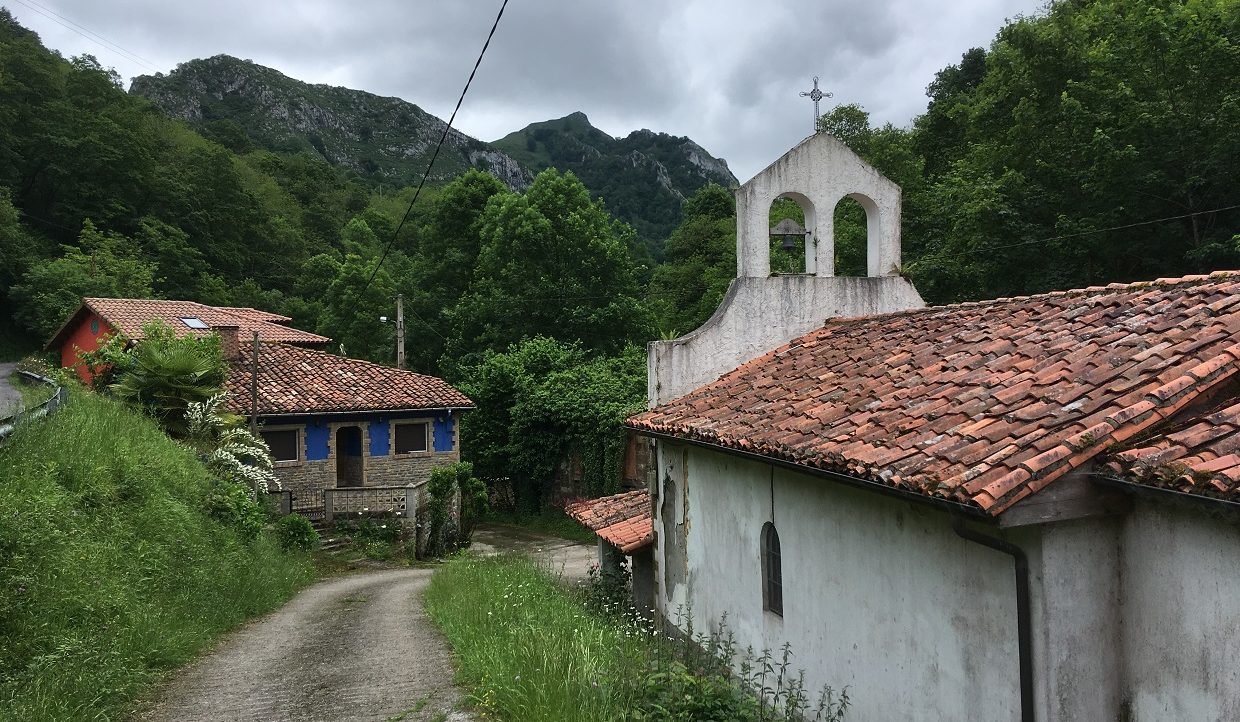 ……and after numerous hairpin bends and hair-raising steep drop-offs at the side of the road, the sighting of 8 or 9 vultures circling high overhead had us worried! However we eventually reached the tranquil valley where our hotel sits in a pretty village…. and today the vultures went hungry. 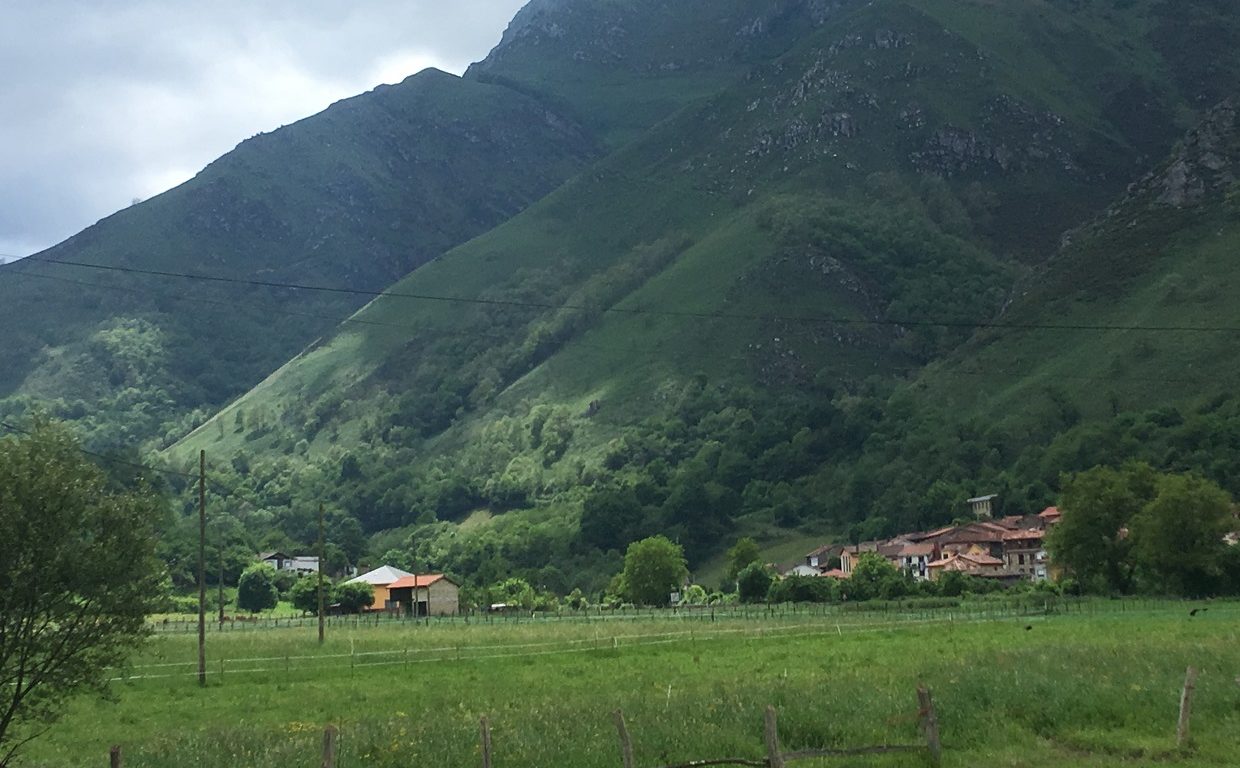 This was the view from our hotel room across the village of Soto de Agues: 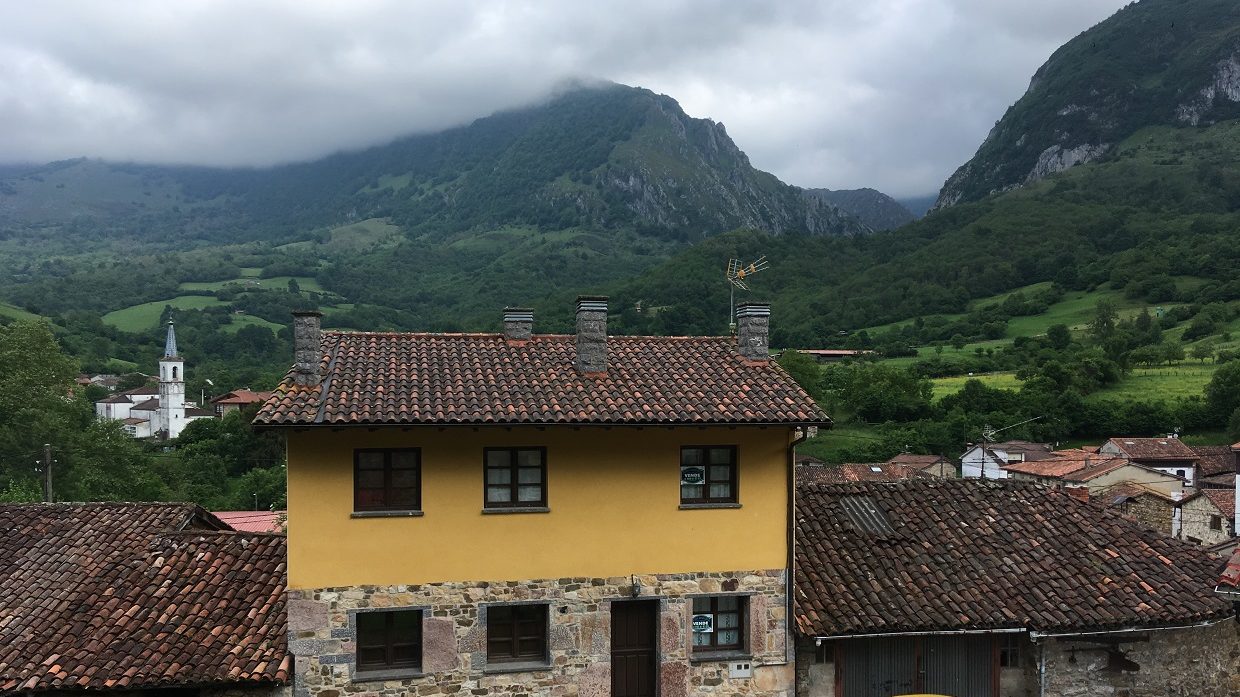 When we arrived we shrugged off the dirt of the road with a beer in the sunny hotel garden; 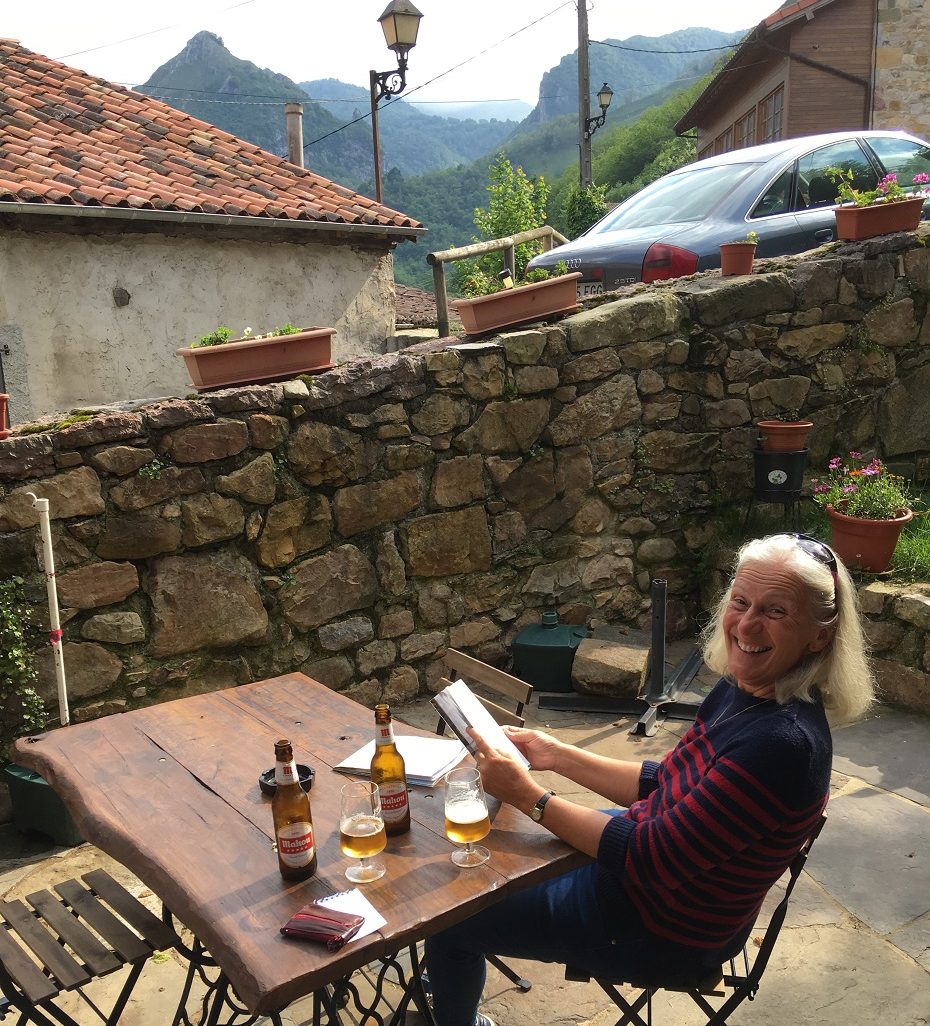 Before dinner we had a stroll through the pretty village, where most of the houses were very old, and seemingly most of those had old barns attached and an “horreo” (raised grain store to keep out the rats) to the front: 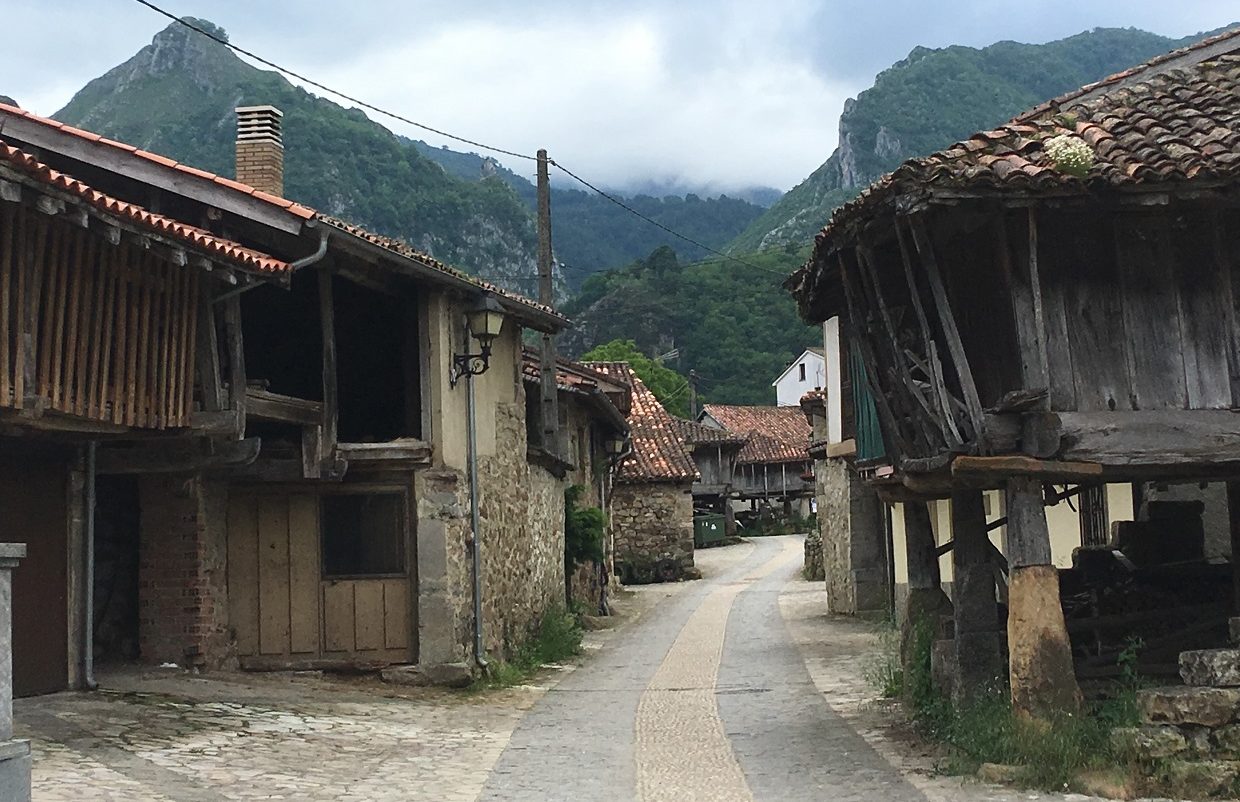 We saw a few younger people around the village, but mostly the population seems to be ageing – like these two neighbours that we came across, having a chat in the sun: 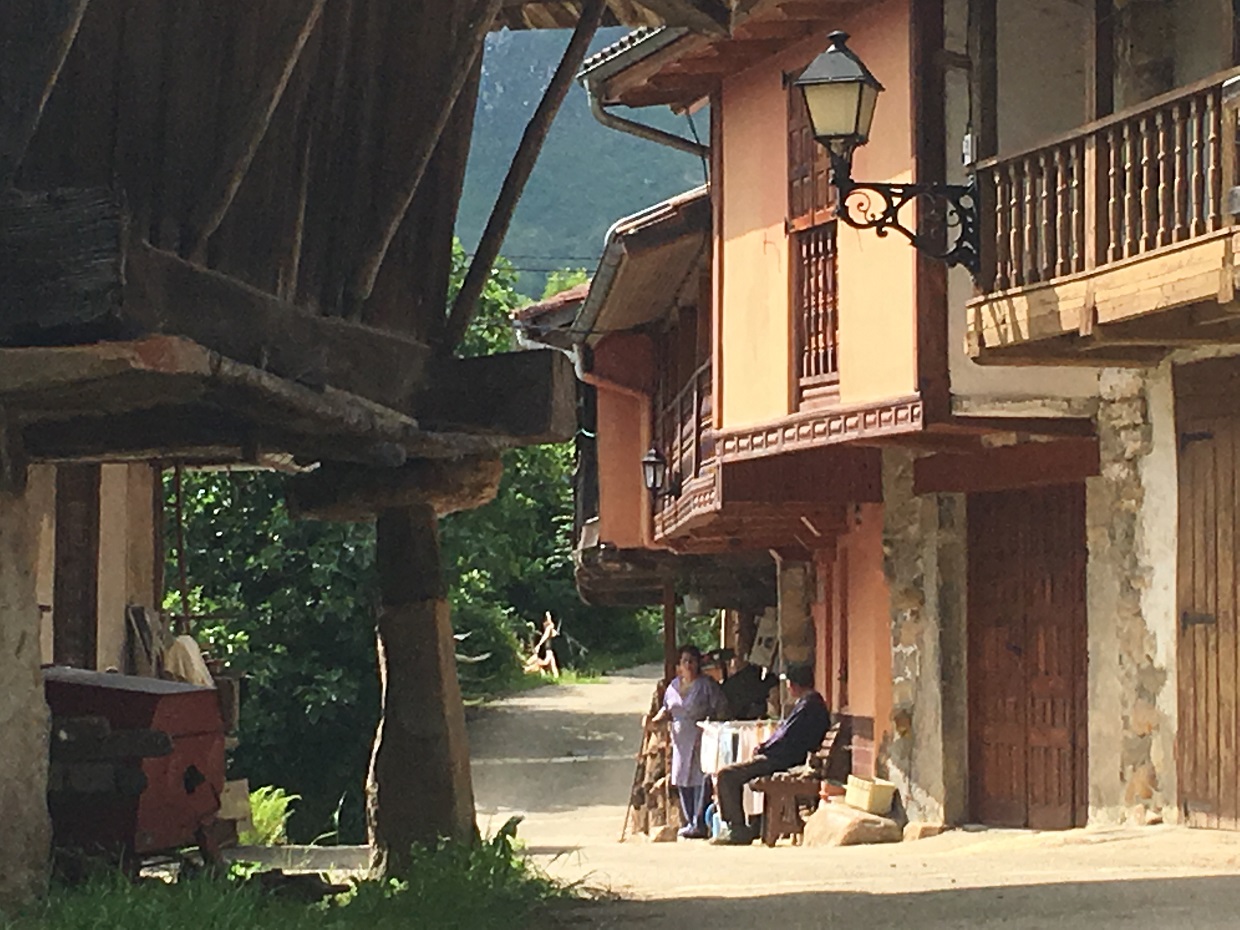 As we walked past the couple we could hear a cowbell around the corner. We had heard these from several high pastures as we stretched our legs, but never got this close – it’s strange how far the noise travels, given how mellow the bells are. we took a short video which you can see by clicking the link below:

In the evening we had dinner, cooked by our host, in the small bar of the Hotel Casa Lao where local folk gathered.

The following morning was another grey day. We headed back to the coast, visited a couple of grey seaside towns and headed back to Calypso, before finishing our 3 day road trip with a visit to the cinema in the futuristic Niemeyer  culture centre here in Aviles and watching Woody Allen’s excellent film “Wonder Wheel” with a mostly Spanish audience and Spanish subtitles. 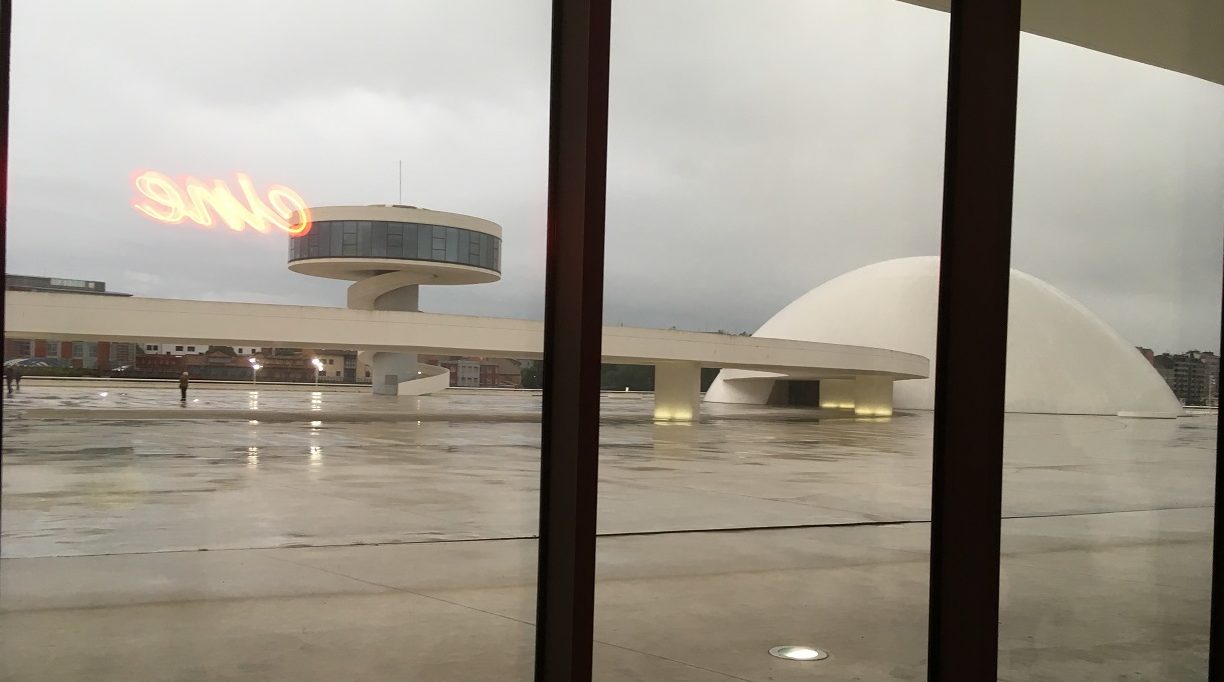 Then to our tiny cabin thinking that it was good to go away but nice to come “home”.

We had hoped to move on, but a combination of needing ideal conditions for the next long leg (because of our undersized/pitched propeller) and the knowledge that the Bisphams were headed our way, kept us in Aviles for a while longer. And so we booked the car for the weekend again, and this time were determined to get up into the Picos de Europa.

It’s a good job that were were determined, as the road beyond Cangas de Onis was closed for a bike race, and so we had a one hour detour to get there – but is was well worth the effort – the scenery was just stunning: 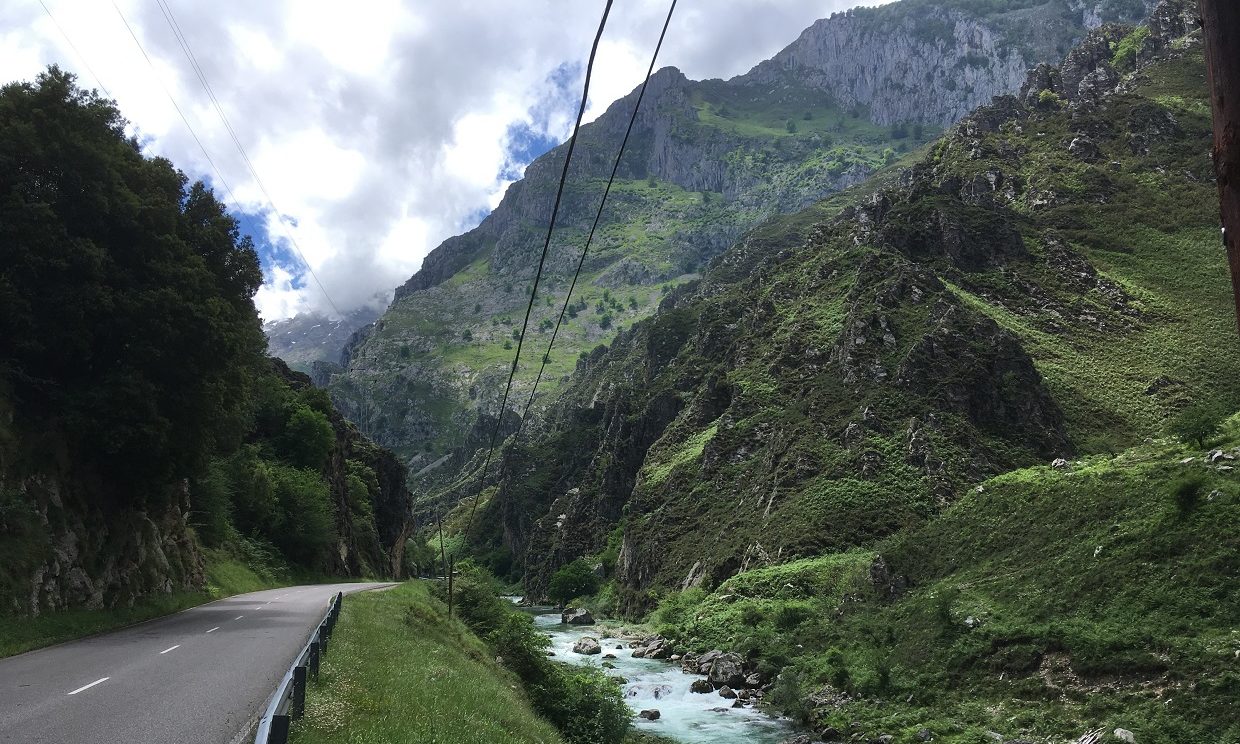 The water in the valleys is brown with silt, washed from fields by the high rainfall. Higher up, however, where topsoil is “thin on the ground”, the rivers are crystal clear – and we can imagine the local brown bears fishing for salmon, as seen on TV! 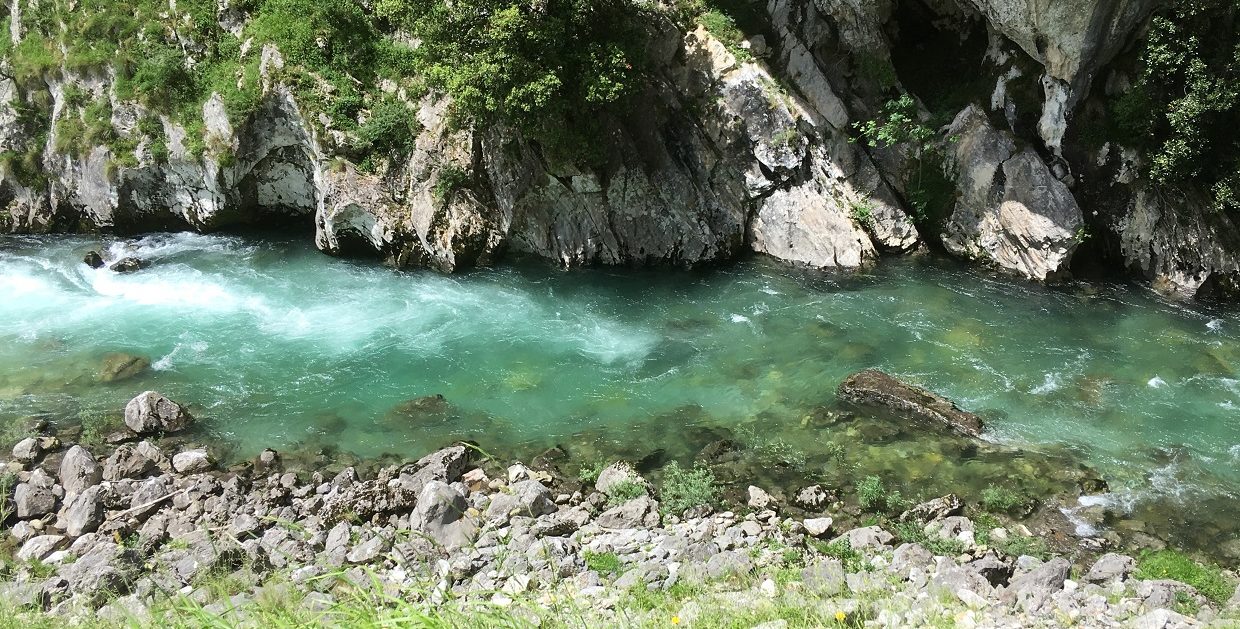 …..and the red roofed villages very pretty (note stones on the roof to hold tiles down – this was the norm!) 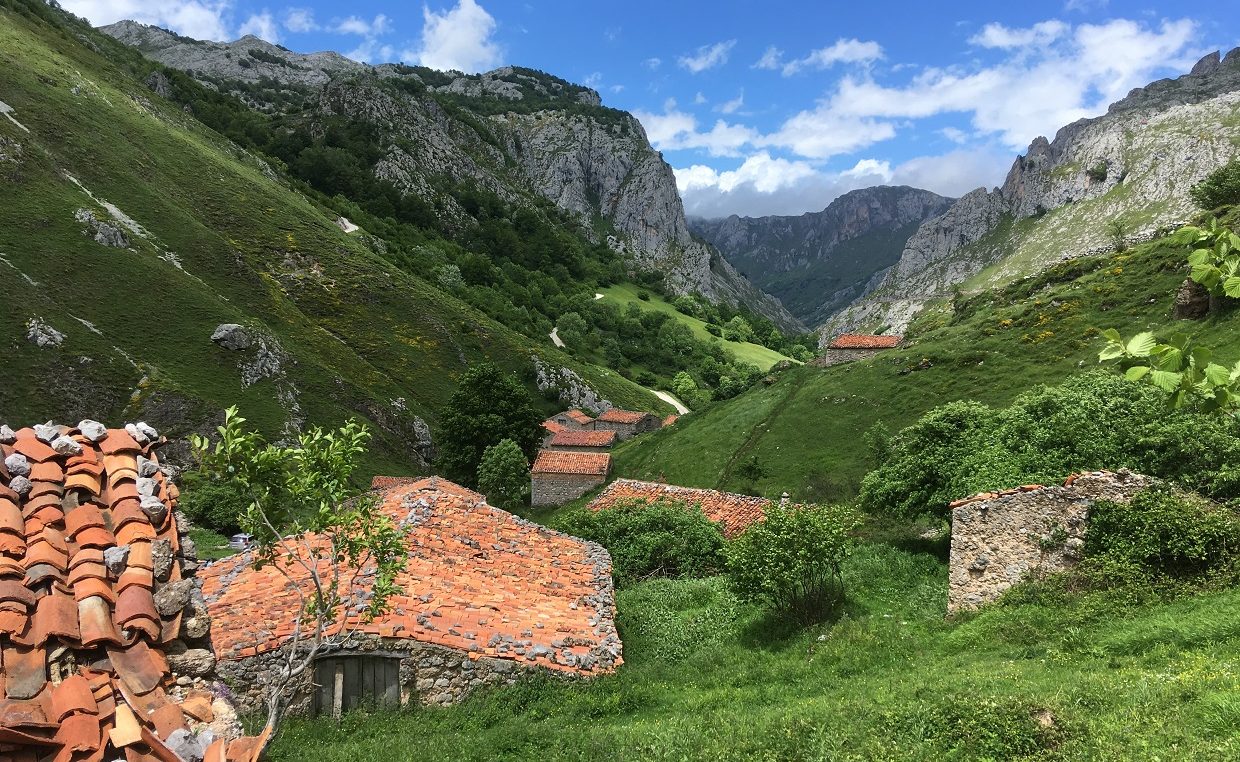 Not sure there are any inhabitants other than livestock in the village above – but the village below, Sotres (the highest inhabited village in Asturias) where we stopped for a cuppa, was well populated and most of the few derelict houses were being renovated.. 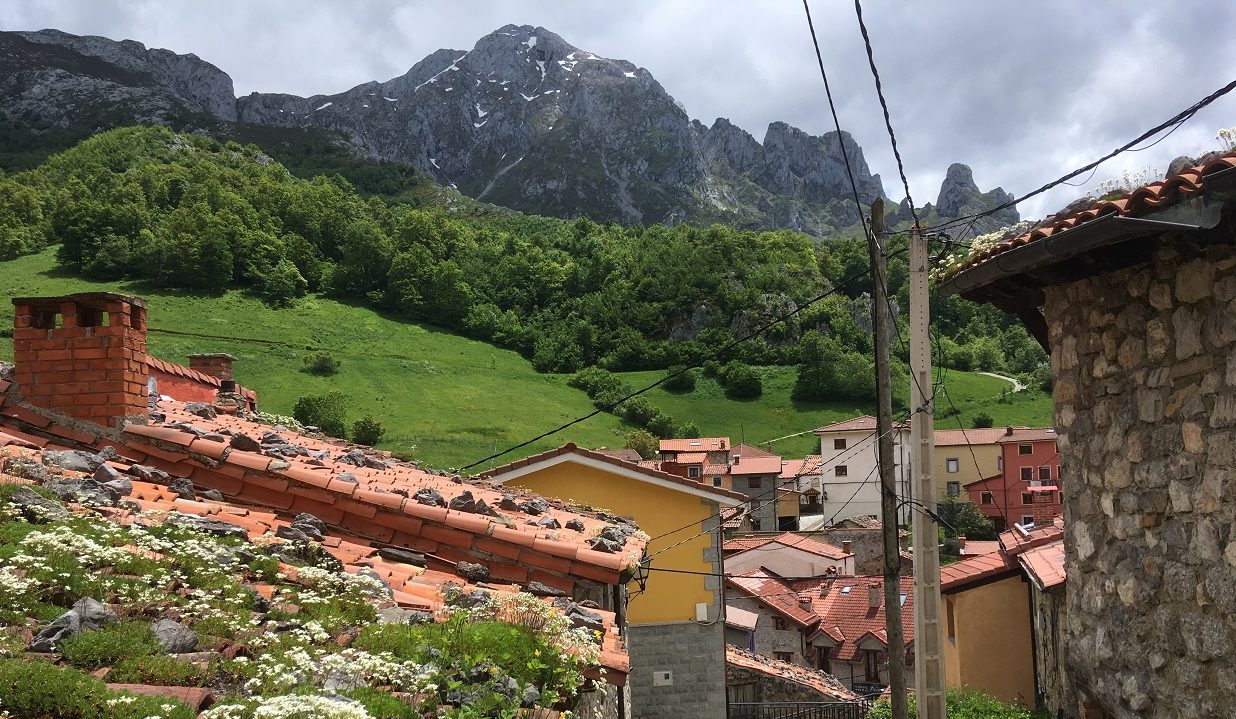 We saw inhabitants young and old…. 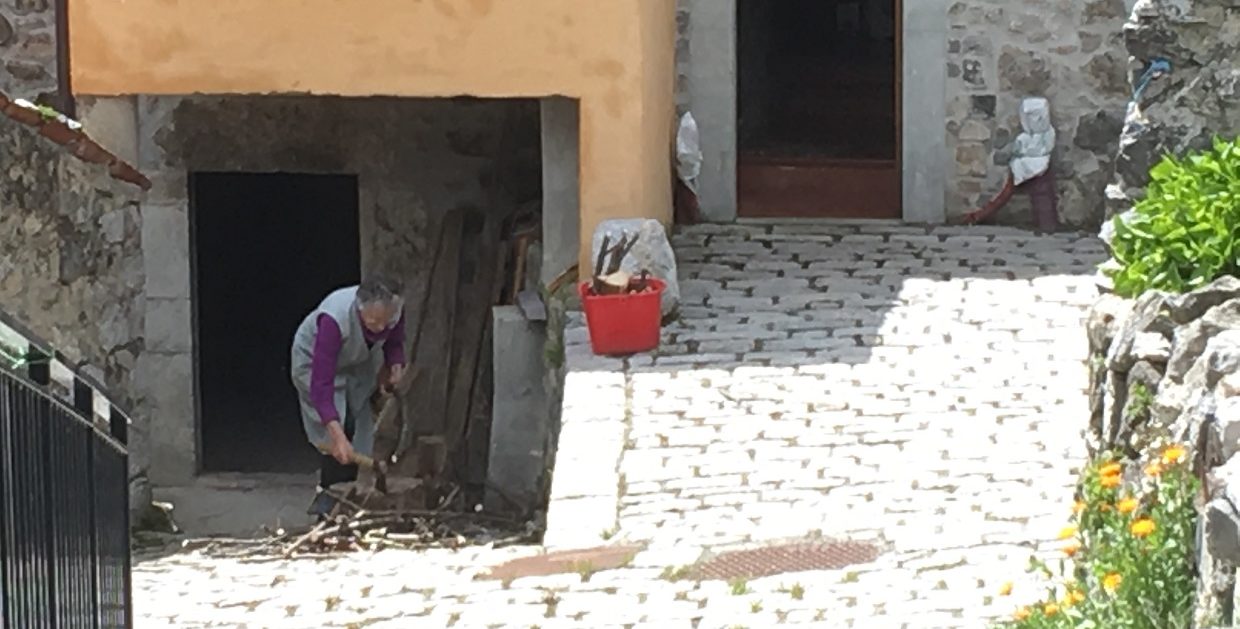 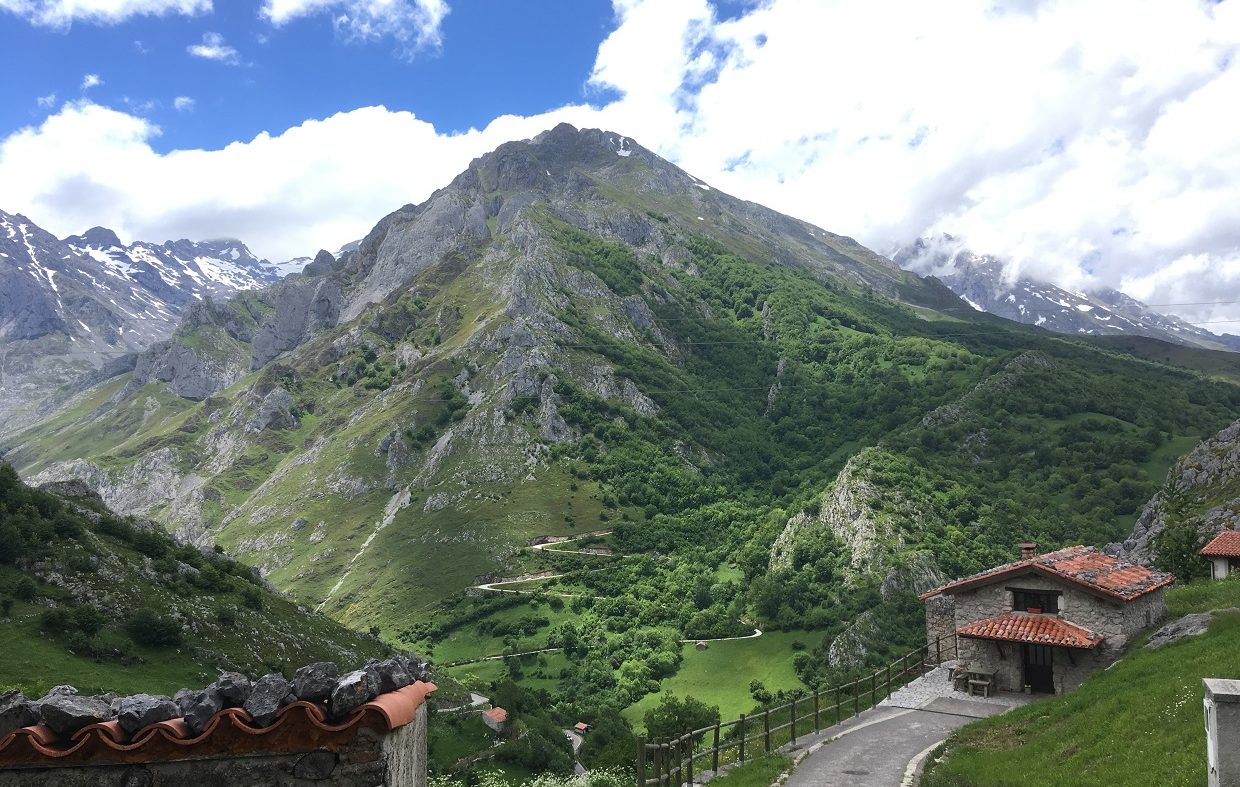 The roads in the Picos are fantastic – the Golf was OK but we imagined a Top Gear Lambo test disturbing the peace – just look at the hairpins in the photo above. However a little caution was required, given other much slower road users just around the next bend – not only the many bikers, but…..Daisy and Buttercup out for their morning constitutional… 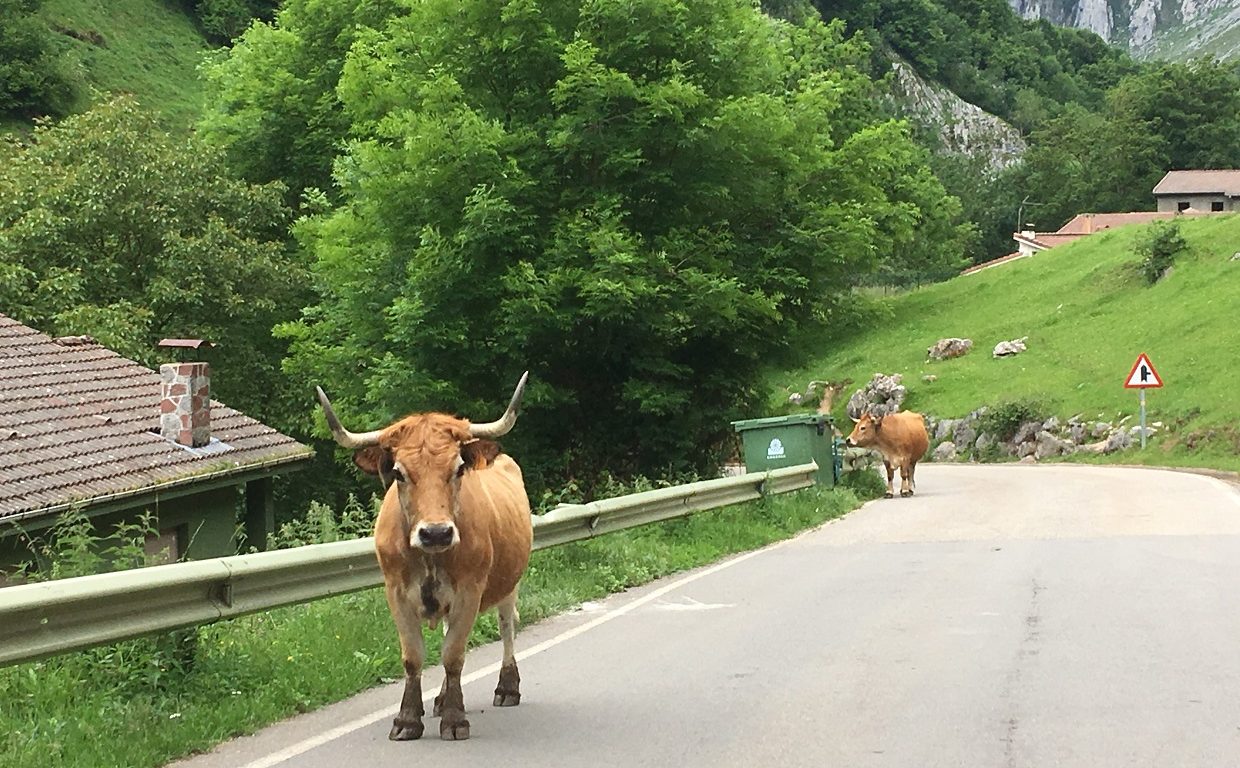 After a lovely day out, (with much driving and not enough walking it has to be said) we retired to our hotel at Arriondas, just outside the national park – but everywhere here is stunning… 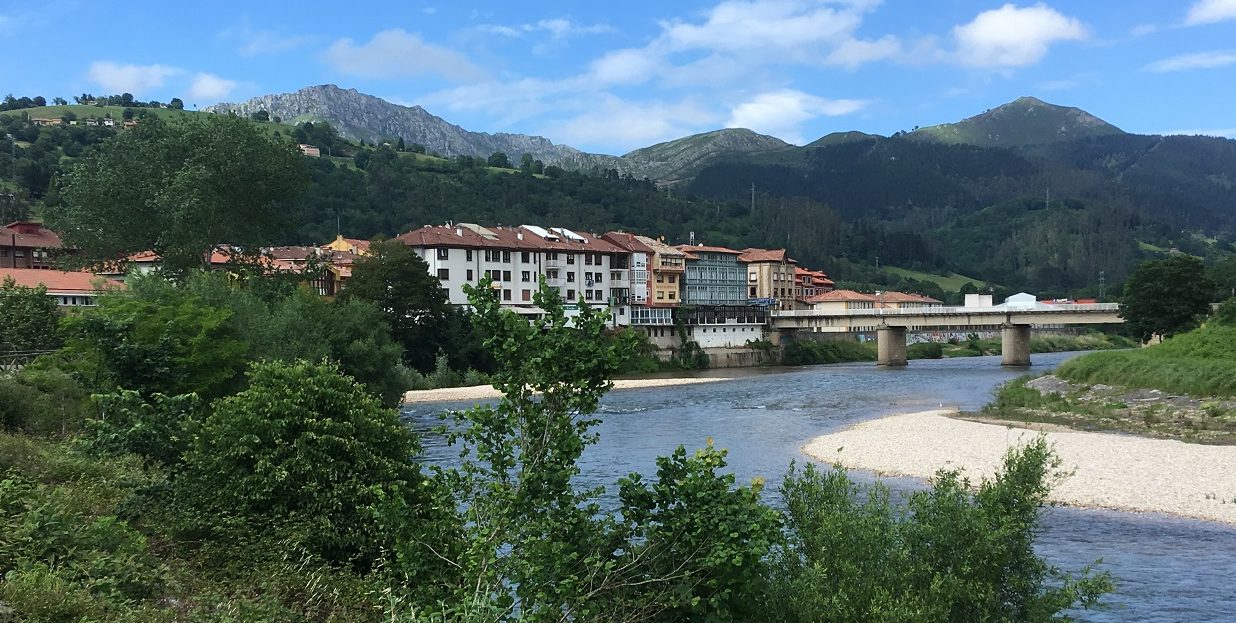 We had a good night out in a very lively bar/restaurant, as usual sitting down to eat for 8.45, before the 9.00pm rush. In fact at 9.30 in strolled 3 families to sit at a large reserved table – 6 adults and a similar number of kids all below 10 years – a common sight here in Spain.

The next day we had arranged to go and visit Adam and Lynne, who were berthed for 2 nights in nearby Ribadesella. We took advantage of having the car and re-visited Covadonga with them, first stopping for a superb lunch at Los Ramos in Soto de Cangas, where we had eaten the previous weekend. Lynne and Adam would join us the very next day in Aviles – but that’s in the previous tale.

All in all our impression of Asturias is that it is exceptionally prett…..nay stunning, the people are very friendly and the food is good (and good value). We managed to have 2 1/2 good days in the 5 that we hired the car, but there is a good reason why it is so green, which enables it to be the biggest cheese producing region in Europe. And our tale of two road trips will end with that piece of useless information (to all but the most dedicated pub quizer!)