….and nearing our winter base….

The hours of research and passage planning proved invaluable. The pilot book says, if rounding the Bill West to East en route to Portland or Weymouth “arrive at the Bill 5 hours after high Water Dover to take advantage of the tide running up the East side of Portland Island”. However at this time you have several hours of tide running with you and you only need a couple to arrive at these destinations.

This also means you will have been stemming a strong tide for six hours across Lyme Bay. And for us bunk huggers it would have meant leaving in the dark at an unGodly hour!

And so we planned to arrive at the Bill a little later, as the tide was slowing, and our studying of tidal stream charts and ignoring the pilot proved to be the right decision. This was supported by responses to a query we posted on the YBW.com forum – asking the panel whether the published material must be followed.

There is an inside passage, between the rocks and the Bill – where the tidal race is much calmer – but you have to get so close to the Bill that you can almost spit on it (literally sand wedge distance) – and that is not for us faint hearted!

The passage was mostly a motor sail with a lovely sea state, but with a cracking sail for the last few hours and as we rounded the Bill. At one point we sailed through a pod of hunting dolphins. We then had a great sail in company (unofficial race) with another similar sized yacht as we neared the Bill.

We were evenly matched, but as we passed the Bill, the (probably) local boat peeled of inside the Shambles Bank, whereas we (probably unnecessarily, given neaps, the sea state and wind with tide conditions) followed the pilot guide advice and went around the outside – and there the cruise in company ended (the race was lost!)

We arrived at Portland Harbour – a massive area of enclosed water – and as required took the North entrance (South reserved for large ships, such as the cruise liner that arrived in the night) and followed the small craft route from buoy to buoy around the outside, as apparently required (although a few local yachts were ignoring this instruction). We finally tied up in the marina after a little over 10 hours and 60nm.

The marina is modern and large – apparently built for the 2012 Olympic sailing regatta. We liked the marina and Portland was fascinating – especially nearby Chesil Beach – a huge shingle bank towering over the town and running for miles along the coast.

It would have been nice to illustrate this point – but we were too tired to bother with photos, and after our short walk (and a quick stop for the obligatory self-congratulatory refresher), we retired to our bunk in readiness for another dawn start. Fortunately the passage had already been planned.

We awoke to another beautiful dawn as we slipped our lines at 6.45am. 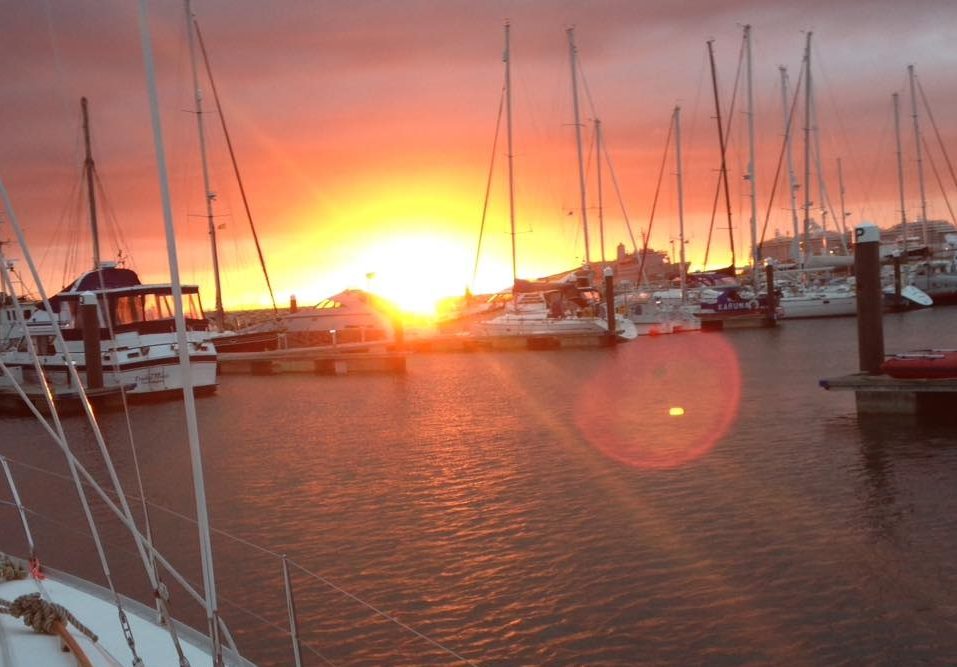 On Monday 12th we were expecting a boisterous sail early on (SW 20kts gusting 25), calming a little but still sailable later, and backing to Southerly as we neared the Solent and turned north east across Poole bay – and for once the forecast was accurate. We headed off with 2 reefs in the mainsail and a partly furled genoa. Initially the sea state was fairly rough with water over the bow – and at one point the helm enjoyed a salt water shower! This was in the area between the Bill and St Alban’s Head (each with tidal turbulence over shallow water) as we edged around the Lulworth firing range; but once we had passed the shallow bank extending from St Alban’s head the sea state improved, and a fantastic sail continued in moderate seas.

As we progressed along the coast a number of French racing boats passed us in the opposite direction. In spite of having right of way (being on starboard tack) we had to dodge out of the way of two of the yachts. This appeared to be a single handed race, and the offending yachts were on autopilot with nobody in the cockpit. Paul did shout good morning to one that passed very close – perhaps it was just as well that the greeting would have been drowned out by the wind………!

As we closed on the Solent we were making excellent time and chose the North Channel entrance as we would arrive just as the tide turned, rather than over an hour later according to the passage plan. The contrary tide had not been quite as strong as feared. Entering via the Needles channel at turn of tide apparently sees a quite confused and lumpy sea.

We passed Hurst Castle and entered the Solent. The wind had indeed backed to Southerly and we managed the entire passage on the same tack (we didn’t have to move the sails across the boat). We positively fizzed up the Solent in flat calm waters, clocking up 9.6nm over the ground, assisted by the tide. The sun was out, the fleeces were off; and all was well in the world. We did actually feel quite a sense of achievement. For some sailing from Kip to the Solent would be nothing – for us it weren’t nothing!

We chose to go to Cowes Yacht Haven for a few days and tied up after 9 hours and 49nm. We certainly slept well that night after 2 long, but very enjoyable days.

Cowes has a great atmosphere – even now at the end of the season and in the midweek. The Cowes Yacht Haven is run by a local trust and is aimed at visiting yachtsmen and racing regattas – there are few permanent berth holders here. Consequently people come and go every day; the yard was filling with one design keelboats on trailers for the weekend’s regatta and the numerous, large sponsors’ flags around the outer wall were being changed. In spite of being relatively quiet as this place goes, we had an interesting stay. Val had not been before and loved the place.

We enjoyed the town itself and paid a visit to Osborne House – holiday home to Queen Victoria. The long-ish walk, via the chain ferry, was well worthwhile. 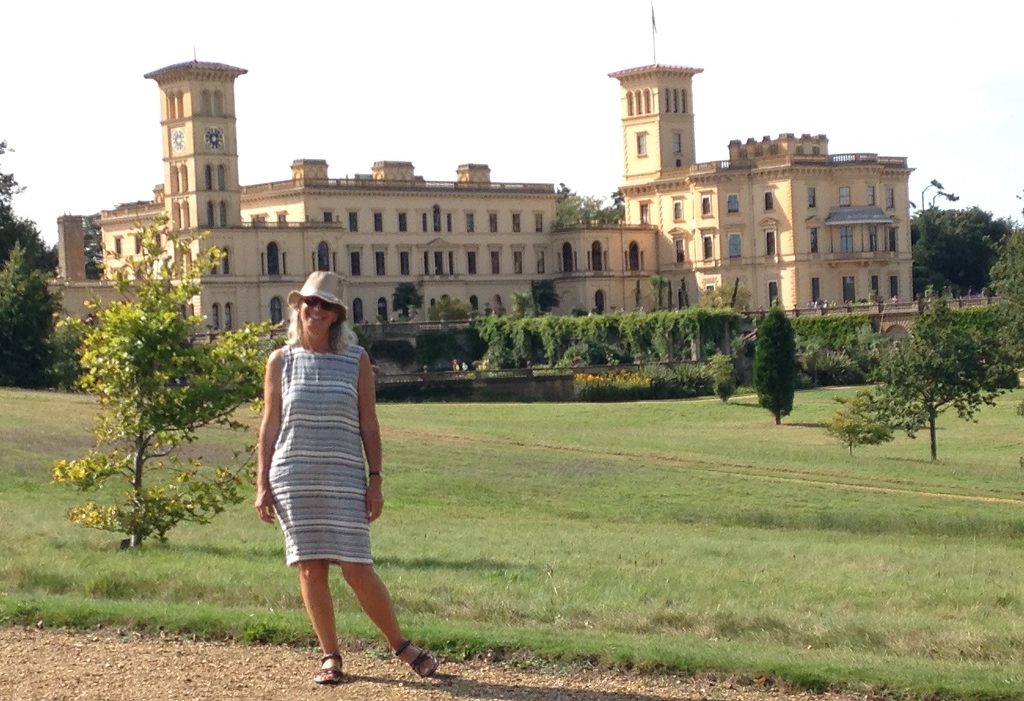 The house was gifted to the nation and is run by English Heritage. The contents remain the property of the Queen, however the house is furnished largely as it existed at the time of Queen Victoria’s death – in the very bed that we stood next to. The house is amazing (and a good proportion is open to the public) and the grounds are impressive. They lead down to a lovely private beach – with Q Vic’s bathing machine on display. How times change!

The story of the private family is well told in words and staging. Val was very keen to go – Paul, not a big fan of stuffy old houses was delighted that she dragged him along! Highly recommended. 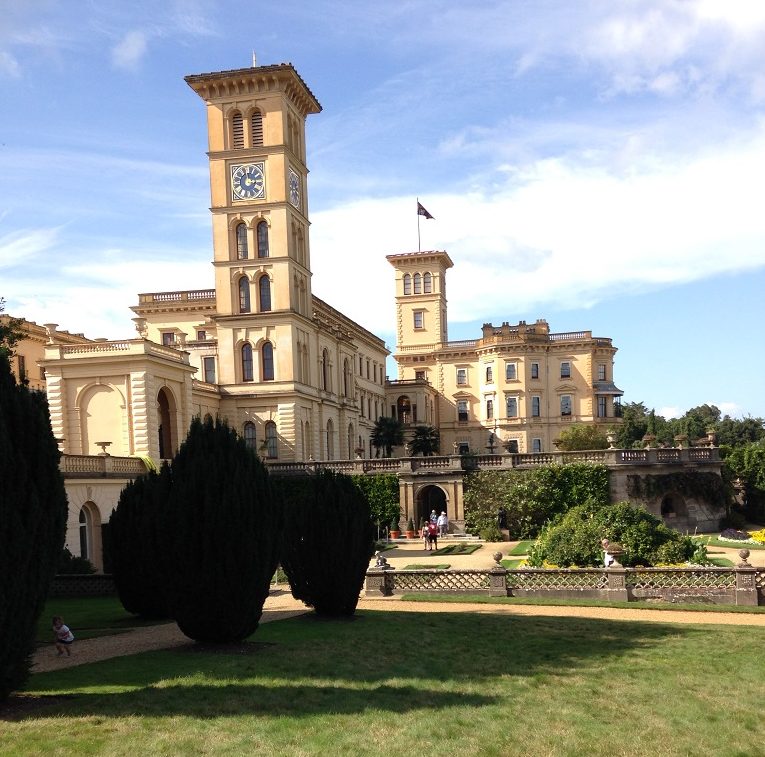 We stayed at Cowes for 3 nights before going into the Hamble, where our car had sat waiting for us since mid August. We needed to go into Hamble on 16th September in order to go to a University reunion on 17th. Cowes was a nice place to stay – but also at just under £30 a night (without the £3.50 electricity charge) was a cheaper option than our Hamble Point home at £41.25 a night. The wallet winced as we checked in, but the pain would soon be over as we are booked to be lifted out on Monday 26th (after the boat show) when the nightly rate in our winter cradle drops to £11.64 – phewww!