We said last year that 2018 was our most memorable and best year yet. This was a very different year in that we halted our slow travels South and ended the year in the same boatyard where we began 2019. That was entirely intentional. We had explored part of the North coast of Spain, A Coruna and the “Rias Altas” last year, arriving in the Rias Baixas late on.

We had read that the climate in the Rias Baixas (South of Finisterra to the Portuguese border) benefitted from a better climate and offered a huge degree of variety in a very safe sailing ground, and felt that another season was needed to explore the area before continuing South. And we were absolutely right to do so.

Variety – The Rias Baixas is a very safe and varied sailing ground. We have stayed at Royal yacht clubs and basic marinas; we have anchored off deserted beaches, visited small towns and villages, bustling resorts and big coastal and inland cities.

Culture – we have seen a very different culture, from Moorish and Christian castles, cathedrals and monasteries; attended many small and larger lively fiestas (the Catoira Viking and Cambados Albarino festivals being favourites this year); and we have again enjoyed our interactions with lovely Galician people and sampled their excellent food and wine (a seafood lover’s paradise). 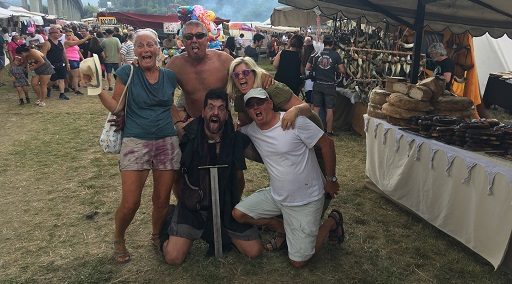 Sailing with friends – we enjoyed the company of old (in terms of our travels) friends Adam and Lynne, John and Debbie, and Ian. It was good to meet Charles and Di. During the season we spent a few weeks socialising and they are all such good company, although our livers were happy that we spent most of our time alone. Lynne’s yoga sessions, Debbie’s paddleboard, the three men-in-a boat clamming trip and numerous lively evenings made this a very enjoyable year socially. 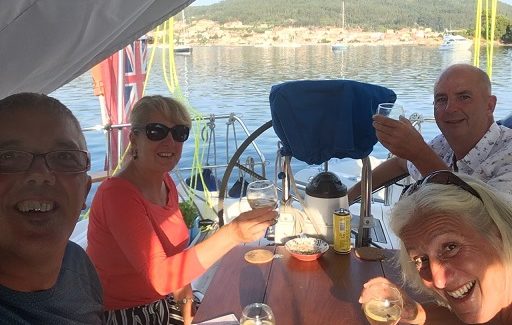 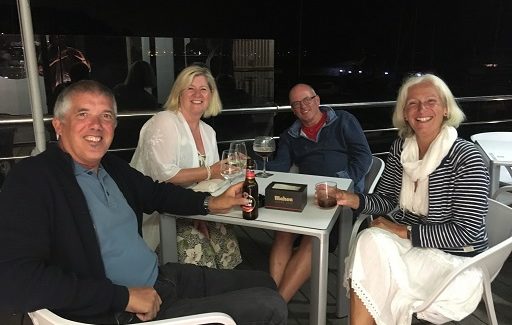 Visitors – we loved sharing our Galician sailing ground with the Cookies and our family. We have invited others but we suspect they must liken our travels to camping on water. In many ways it is!

Shortly after we set off James asked permission to seek Alice’s hand in marriage. That has to be THE highlight of the year and it made their visit, along with Jos, even more special. 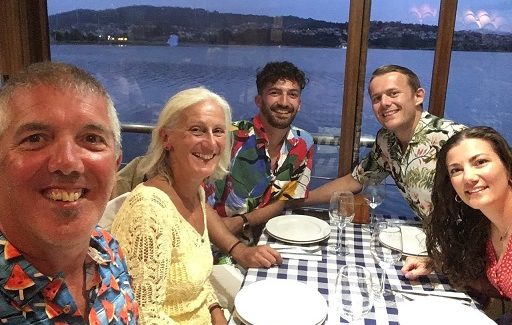 Finisterra – we back-tracked and anchored off Finisterra to witness the end of the route of the Camino de Santiago and had a short but very interesting and enjoyable stay.

Vigo – perhaps not as stunning as A Coruna, but we liked the city very much, and the Real Club Nautico de Vigo with its excellent facilities at the heart of the city was a real find.

Illas Cies –  wow, just wow! This is a stunning island, although we were pleased that we headed ashore early and explored before the hordes (and I mean hordes) of day trippers arrived. A national park permit is required to anchor here for those intending to visit, but very easily obtained HERE

Wedding – it was wonderful to travel to Vilamoura on the Algarve for the wedding of our god-daughter Kathryn and her lovely new husband Ben. A proud day for their parents and an amazing celebration party!

Trips away – we had several trips away from Calypso this year. We visited Tui and Porto with Adam and Lynne, staying in hotels.

We camped in the Alantejo on the way to the wedding and the Douro Valley on the way back.

We had a trip along the Algarve coast in Rick and Debbie’s yacht after the wedding, and on the way home at the end of the season we had a superb camping trip through Northern Spain.

These, together with exploring the Rias Baixas more than made up for the fact that we started and ended the year in the same boatyard rather than continuing our trip. 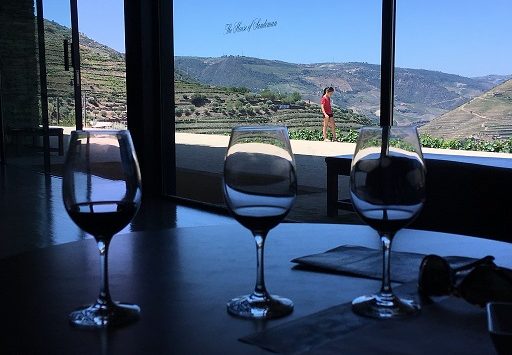 Anchoring – we anchored for 33 nights in total and further expanded our experience and confidence. Sitting in the cockpit, bobbing around and watching the world go by is a delight. Our Rocna never dragged once, although the fact that we slept soundly is in some part credited to our anchor drag alarm!

New Propellor – we had everything crossed – and it worked. See below.

We are having to rack our brain, but so far nothing springs to mind. Yes, it rained a little, but that’s why the countryside is green and beautiful. And when it rains it gives us an excuse to put our feet up and take a rest!

Overall, the climate here suits us very nicely indeed. When the rain bounced down for a day in high winds reaching 50 kts we were safely tucked up in San Adrian marina at the very head of Ria De Vigo reading books, with little or no swell in the marina.

After a bit of a glitch with the blog formatting we stopped posting at the end of 2019 and are only just catching up at the start of the 2021 season, 2020 being written off as far as sailing went!

However, our plans were to have headed to the Xufre boatyard in late April, launch early May and as soon as conditions permitted to head slowly down the Portuguese coast.

Not that slowly, however, as we had booked to be lifted out and spend the winter at the Sopramar yard at Lagos on the Portuguese Algarve.

All of that went pear-shaped with the arrival of the Covid-19 virus. 2020 was written off, and we have decided that in the 2021 season, cut short by a both the pandemic and the maximum 90 day Schengen visa allowance (following Brexit) we will have an 89 day trip from June 2021 where we will once again finish the year at the Xufre boatyard.

In May 2017 we published various statistics from 2016 and each year have stated our ambition to improve some of those figures. Well once again we achieved some of those aims (anchoring more) but failed miserably on others (sailing less). Here are the 2019 figures followed by 2018, 2017 and 2016 in brackets: 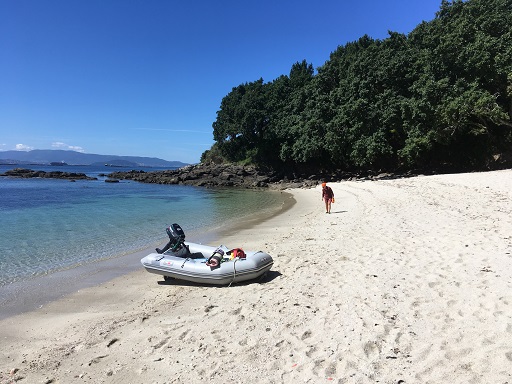 The biggest improvement was another year where we increased our time at anchor, and with that our confidence grew.

It is not just the fact that anchoring is free, but bobbing around is very peaceful indeed, and coming ashore in the dinghy makes life more interesting. We had invested in a new dinghy (to us), a fairly new Avon Rib-Lite – hrad bottom but folding transom.

The new 5hp engine from Rich and Debbie was great fun one up and planing, but it didn’t quite have the grunt to get us both up.

The answer? Either a bigger engine (8hp is the max rating for the dinghy; or FB Paul will have to lose some weight – guess which it will be…..

The percentage of time under sail was (again) disappointing. When we set off we had read that many cruisers spend most of their time motoring and little time sailing. We resolved that as we had no desire to race to the Med we could wait in port until we had a weather forecast that would see us sailing whenever possible.

However, each time we travel we have around 20 to 30 minutes from each trip spent under engine departing (untying, lifting anchor etc) and arriving (tying up/dropping anchor etc). Adjusting for the time spent arriving and departing by 25 minutes per trip would increase the sailing percentage to around 36%, which is still not a lot. Here in the Rias we have moved very frequently, often not very far, and so perhaps we have just got lazy!

Our average speed remained similar to last year at 4.1kts – but why, we have the new propellor, which has certainly given us an additional 1.5 kts under motor?

When we were sailing it tended to be inside the Rias, where winds are much lighter than off the coast, and we had none of the exhilarating 7kt plus passages that we had experienced on the Costa Da Morte the previous year. Neither did we have the assistance of tides, as we used so effectively in the UK, Ireland and France.

When motoring this year we have tended to do so at around 2,000 rpm, rather than at the 2,400 rpm we used with the previous propellor, so not taking full advantage of the 1.5kt improvement of the new propellor at 2,400 rpm which doesn’t sound much, but when we’re talking about an uplift from around 4.0kts to around 5.5kts that is a 37.5% increase in motoring speed.

If we deduct time spent arriving and departing (the 25 minutes referred to above) then our speed whilst actually making progress was 4.95 kts.

This year we spent more nights than ever at anchor. This, together with mostly good value Spanish marinas (including a month at San Adrian when on our Portuguese trips for only 200 euros) reduced our “parking” costs to only £12.27 a night. That is well below the budget we had envisaged before setting off from Scotland. It was helped by discounts given to members of the Cruising Association and obtaining the discount “passaportes” offered by different marina groups.

So, that was it, another good year. As good as the year before, but so different in many ways.